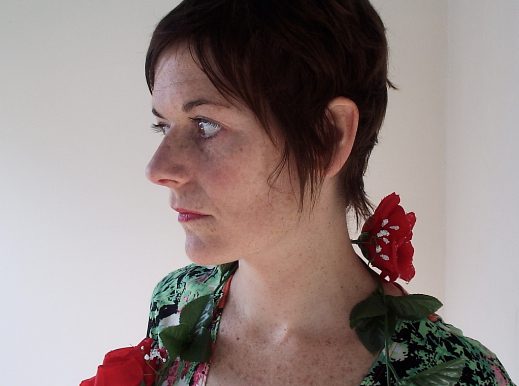 Editor’s Note: This is the fourth part in a weekly series of texts from a new work by Kristen Kosmas. Check back on Wednesday, Aug 28, for the fifth and final part.

#5. DESCRIPTION OF SOMETHING I’D REALLY RATHER NOT NAME.

As far as I know
there is a long table made of wood.
At one end, a man with a giant head, bald,
is looking this way and that.
(He is maybe a little paranoid.)
He is eating an endless
chicken thigh with the skin still on it.
He chews and talks.
He talks but he doesn’t say any thing.
He chews and murmurs.
Grumbles.
He is thinking about his money.

He tosses the chicken thigh bone over to the right.
It lands with a dull thud on the stage floor.
He gestures his hands around wildly in the air at about shoulder level.
His face is all—
Maybe he is praying for God to protect his money
while he finishes chewing his over-large mouthful of chicken.

He takes another thigh from the silver platter.

Someone’s hands are upstage left, framed very small in a little window. (Maybe part of a torso also shows, but mostly it is the hands.) The hands are wringing a white handkerchief around and around. The handkerchief is scented lavender. The lavender smell and the chicken smell mix to make a nausea. The person whose hands these are is whispering. She is whispering to herself in quick syllables. What is she saying? I don’t know. I can’t hear her. She is in some sort of conflict. She is having a moral dilemma. She has red hair.

All of the electricity in the city goes out at this point and there is a kind of mild panic. It is possible that in some people the mild panic grows ever greater. It is a feeling of the walls being pressed in upon, some cosmic pressure asserting itself on the space from the outside.

Yes. I fainted at a party recently.

Someone comes in holding an emergency candle and makes a gesture like this—. He begins speaking about puppets. This is to calm the audience down, he’s trying to calm the audience down. But it isn’t working. Some people are– Some people freak out. Puppets really freak some people out. Panic mounts to terror. The bald man at the table starts pounding his fists. He is saying: I Want My Money! Give Me My Money! Over and over again. He is saying it in an imitation of loud-speaking, but in fact, he is not saying it that loud.

The red-haired woman has expired. Later, people will say: It’s for the best. She really was suffering.