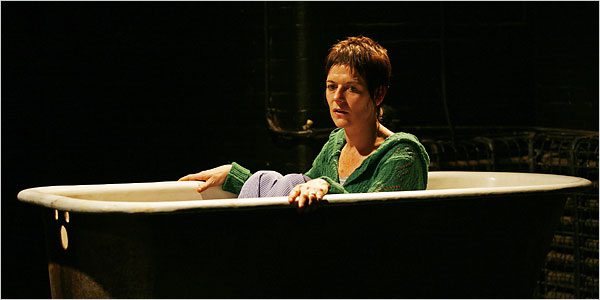 Editor’s Note: This is the second part in a weekly series of texts from a new work by Kristen Kosmas. Check back on Wednesday, Aug 14, for Part 3.

#4. A CERTAIN DESCRIPTION OF FEAR. OR: WHAT IT IS LIKE TO BE HUMAN IN CERTAIN MOMENTS.

The actor imagines a puncturing
a small puncture
in the skin
A pinprick in the fingertip or somesuch
(It may wince, the actor
It may not)

The actor imagines not having any legs
ears

The actor imagines not being able to find the words
The actor thinks about its pajamas
The actor thinks about its soft parts, its vulnerable
parts under its pajamas and wishes it had
a permanent shell, permanent shells
(The actor’s hand may subconsciously
gravitate toward & fall
near or around its soft parts, near or around its vulnerable parts
But only SUBCONSCIOUSLY!
The actor’s hand may only subconsciously
gravitate toward & fall. Otherwise
the actor is in the wrong kind of play, is doing
the wrong kind of play.)

The actor imagines plastic.
The many horrors of plastic.

The actor imagines the life force, which was previously sucked out
going out now to the very edges of the universe
And gathering all that was once within it (the universe)
and collecting it in a kind of imperial sweep
Completely disintegrating and annihilating it, without design, desire, or purpose
Then, the life-force returns to the actor on its monstrous path
bringing all along, but now all as nothingness, all as momentum
of nothingness

To clarify: The actor
imagines infinite expansion
and then infinite retraction
out of & then back into the self
This ultimate expansion slash retraction (which destroys everything and returns it
to nothingness taking the actor and audience with it)
is difficult to describe, but easy to imagine
It’s also
really super scary and weird
For the actor

To clarify: The universe
exhales
& then inhales
completely
And then nothing ever happens
after that

Or so the actor imagines

The actor has been sitting in a chair this whole time. There has been a blanket on its lap, which the actor now slowly lifts to expose at first the feet, then the ankles, then the shins, then the knees, then the thighs. When I say slowly, I mean: SLOWLY.
At this point, the legs of the actor open. The whites of the thighs are revealed as well as the white fabric of its underclothes.

On this whiteness is projected a film.

The film is one of nature. Things happening in nature.

The film plays for a time. We hear the mechanism
of the film projector.

Finally, the actor speaks.
It says: