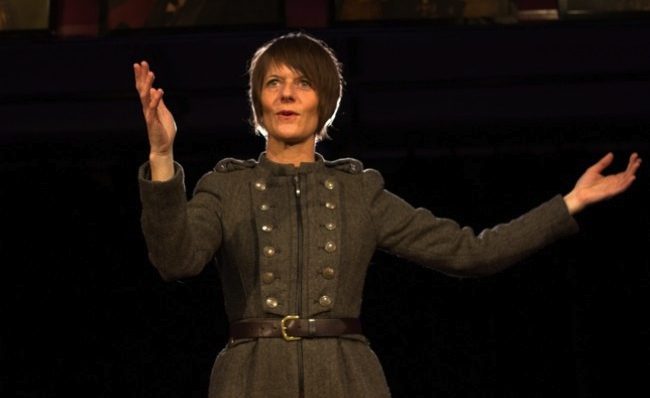 Editor’s Note: This is the third part in a weekly series of texts from a new work by Kristen Kosmas. Check back on Wednesday, Aug 21, for Part 4.

#2. DESCRIPTION OF MORNING. KIND OF A NEWS FLASH.

To the right, an unmade bed, a half-drunk
pot of coffee, a dirty
frying pan.

A curtain hangs sloppily in the middle of nowhere.
Recall Buffalo, 1993.
Tattered dresses nailed across
windows. Dresses are old, nails are rusty, windows are broken.
We find ourselves suddenly
in a grain silo performing a spontaneous opera. Niagra
Falls. Breaks an ankle. Woman carries it
all the way down the mountain.
Ankle bones sticking out of skin. Lot of blood. Torn flesh. Afraid of bears. Twigs snap underfoot. And yet she bears it
down. She was a good person then. If a little grumpy.

THE WOMAN: Nature is a terrorist! Naturalness is a myth
we make up to console ourselves
when things that ought to be on the inside
come poking through to the outside!

NIAGRA: Did you wake up
on the wrong side of the bed?

To the left, daisies
A windowsill
where growing nasturtiums.
Edible flowers. Almost enough
to make you believe in God.

To the right,
a chain saw buzzing through it all.

SOMEONE SAYS: Personality experiments!
SOMEONE ELSE SAYS: I’m sorry, I’m not available.

Someone dribbles a basketball to the left.
To the right, someone tries to sing.
Lot of little bones
caught in her throat though.
Can’t eek anything out.
But the gesture of trying
is full of pathos.

THE WOMAN: These trees. They make my hands ache.

The singer coughs up the bones.

THE WOMAN: Sometimes you wake up and you just want to have a fight with someone. You are raring to go. You look around. There’s no one there. To blame for everything. You throw a shoe at the wall. It makes a dull thud then lands on the floor. Just stays there. Unprovokable.

The singer gets down on her hands on knees and collects the tiny bones in a tiny bag made of very old and very worn fabric.

NIAGRA: Pull the hairs out of your head! One by one! Try to inflict some pain on something!

THE WOMAN: They come out so easily. It doesn’t even hurt. They just come. Right out.

NIAGRA: That’s defeatist.
Bite yourself on the knee! Really hard!

THE WOMAN: Sit up in blankets, knees pulled to chest, think: Television. Television. Maybe there’s something to it.

Bit of advice from

NIAGRA: Get a cat. A cat will bite your knees for you. A cat is provokable. Much more provokable than a shoe. Look at me! I’ve got this constant
rainbow.

Somewhere in the middle of it all a tall candle.

In reality, it has begun to snow at this point.