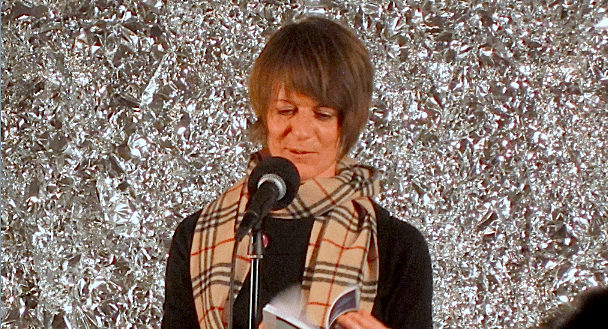 Editor’s Note: This is the first part in a weekly series of texts from a new work by Kristen Kosmas.

#3. A CERTAIN DESCRIPTION OF BOREDOM

To be narrated by a tall, blonde, classical-looking and classically trained actress possessed of terrific presence whose career is going mysteriously nowhere. This actress is a cloud in pants. And boots. She tells everything. She tells nothing. Telling everything and telling nothing are similar. Maybe the same. We care and don’t care according to our … proclivities.

The space is non-descript. It only needs to have one wall. To the left.

To the right, there are no little windows.

I had a mother. We all did. Maybe it is not so bad after all
to be a little rug. How do we know?

IT IS SOMEWHAT LIKE BEING A MOTH
BUT ONLY IF THE MOTH IS DEAD ALREADY
AND LYING
ON THE TABLE NOT DOING MUCH
OF ANYTHING ANYMORE.
THE TABLE IS WOOD. THESE THINGS ARE PLAIN. THEY DO NOT SCARE YOU.
A LUMP OF WOOD. A LUMP OF WINGS AND FUR. AND YOU—
YOU ARE THERE TOO.
AND MAYBE YOU HAVE EATEN TOO MUCH.

To the left, a wall. Beyond the wall, a street somewhere. A neighborhood. If it is dark outside, and all of a sudden the sky flashes with light, with lightning, and then afterwards there is a clap of thunder and a rainstorm for thirty seconds, this is something different altogether. This is what has just happened in fact, but we can’t know anything about this because we are in here and to the left of us is a wall. Which prevents us from knowing the doings of the sky right just right now.

BUT IT’S NOT SO BAD!

Whether it is dark or not, beyond the wall is a street. No matter what time of day it is, and no matter what the sky is doing, the street is there. For now. If all of the people were to disappear off of the face of the planet, the street would remain there. For some time. Eventually, it would fall into disrepair. It would crumble into the earth, pass through the crust of the earth and fall into some mysterious subterranean sea that we know nothing about. The subterranean sea would deal with the hunks of asphalt in its own way. It would have to. It would not have time or inclination to think: Ahforchrissake. What’s all this? It would just get on with it, whatever it was going to do by way of the asphalt. However,

At this moment the street has probably not fallen through the crust of the earth
and it is probably continuing to do its current job: carrying a current of people
to and fro, supporting people on their… journeys. It is further (the street)
defining territories beyond which
lie other territories beyond which
lie other territories
and so on. (We may call these territories “neighborhoods.”
When they get larger, we may call them “hamlets”, “townships”, “cities”, “states”, “regions”, “countries”, “continents”, “hemispheres”, “etcetera”. All of these are connected by streets and now these distinctions are political. Though once they may have been considered practical, or convenient, or helpful, they are now more or less—)

[A sound begins. It starts out low but increases as it goes along.]

[The classically trained actress stands there. She is neither afraid of nor interested in the low sound getting louder as it goes along. The audience, on the other hand, might be driven crazy by this sound, which goes on for much too long while the tall blonde actress doesn’t say anything or do anything anymore. And yet, something is happening. Everywhere and nowhere, something is happening. Fingers are swelling and turning blue squeezed tight by platinum rings that are too small for them. As an example.]