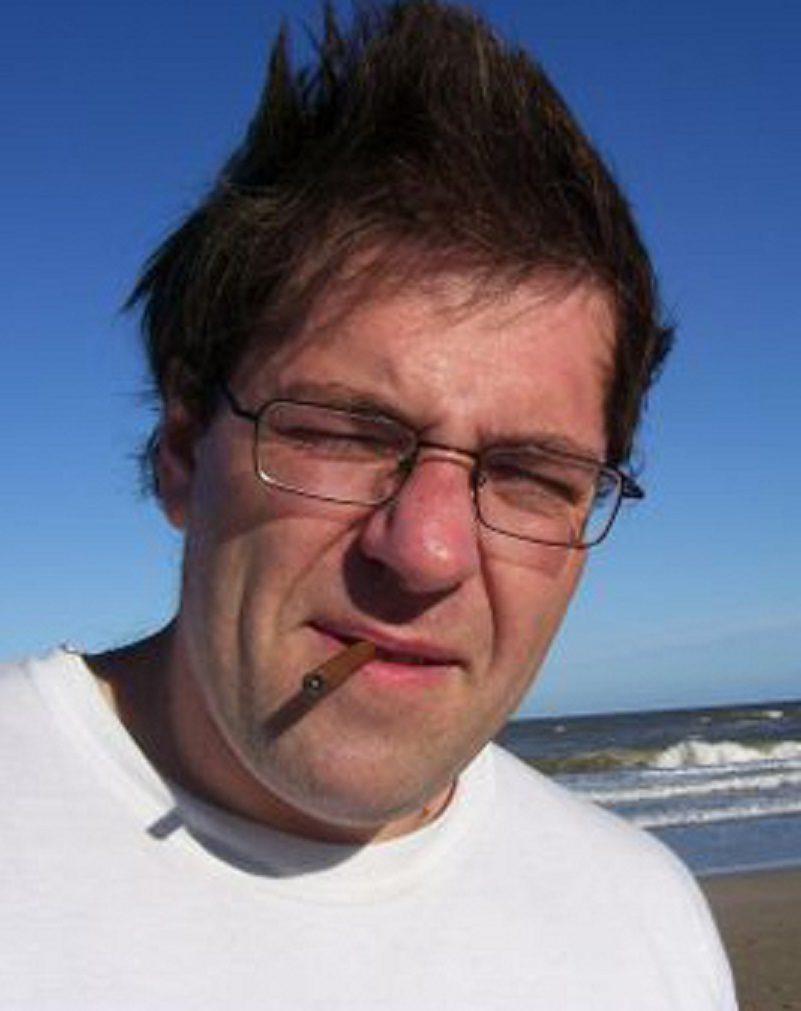 UNDER THIS TERRIBLE SUN

During the weeks that followed, Cetarti slept a lot. When he was awake he was high, and he spent almost all of his time (along with the wreckage of his attention) moving between the television and the fish tank. In that condition, the axolotl was ideal for observing: almost always motionless, every once in a while it swam lazily upward to get some air and a mouthful of the flakes of food floating on the surface. Cetarti went on eating little or nothing, but he trusted that his low metabolism would compensate for the decrease in calories. He often had nightmares in which, with some variation from dream to dream, he was shot to death with a shotgun. Sometimes his mother was with him, sometimes he was alone. But he always saw the shadow of an enormous man (sometimes the guy wasn’t completely human, but had some kind of tentacles that came out of his face) with a shotgun he fired at Cetarti’s skull. His head would go flying, but he didn’t die immediately, he got to live long enough to see the splinters of his bones and the bloody mucus that stuck to the upholstery of a chair and some curtains. He dreamed other things too, but he didn’t remember them.

One day the electricity was shut off. He woke up early and realized what had happened from the new silence of the freezer. Then he went through the house trying all the light switches, as if one of them might still hold some electricity. That day he showered (he hadn’t bathed in several days) and went outside to have breakfast in a bar on the avenue. After so much time eating badly, and only cold food, the café con leche and warm croissants were like an injection of life. Afterwards he walked a bit, looking at things and the people in the street as if they were the landscape of an unknown planet he had just landed on. Breakfast, the open air, and the sun pulled him out of his lethargy. He went back to the house and tried the phone; it still worked. He called Duarte and asked him if he knew anything about the insurance money. Duarte said he hadn’t heard anything, but that he would find out and let him know. He stood in front of the fish tank and sprinkled a little food on the water’s surface. The axolotl didn’t move. Cetarti spent half an hour sitting face to face with the animal, observing the most minimal movements of its feet or its external gills. The phone rang; he answered, thinking it was Duarte calling about the insurance, but it was the real estate agency calling to let him know he was two days late with the rent. He apologized and explained that he had just gotten back from an unforeseen trip, and he would be there in an hour to pay. On the way to the agency it occurred to him that it didn’t make sense to go on paying rent. When he got there, he told them that the month he was paying for would be the last one he would spend in the apartment.

A multitude of little shells was piled up on the beach, shaking like bottle caps in an earthquake. For three nights in spring, horseshoe crabs in the Moluccas emerge from the depths where they live and reach the coasts. In three days of full moon and high tide, they cover the sands along the Atlantic coast of North America for hundreds of miles. . .

Danielito’s mother was slicing tomatoes and peppers in rounds on a cutting board before adding them to the onions and meat that were starting to brown in a saucepan.

These living fossils are distant relatives of spiders and scorpions. Along with millipedes, arachnids were among the first organisms to emerge from the sea. Scorpions, already present in the Silurian period, are among the most ancient arachnids.

“In the freezer there’s a can of peas, could you hand it to me? And if you want us to keep talking, turn off that TV.”

Danielito obeyed. He turned off the TV and took the peas out of the freezer. His fingertips stuck to the can’s surface.

“Put it under the tap for a while. Just so I can get them out, then they’ll finish thawing on the stove.”

Danielito turned the can under the stream of water for a couple minutes, then opened it and dumped the irregular green cylinder into the pot with the peppers and tomatoes.

“Duarte says it was cruel of you to bring me to the cemetery. That it wasn’t necessary.”

“And since when is that son of a bitch Chancho Duarte one to talk about cruelty? I asked you because you’re the only person I had. If I’d had someone else I wouldn’t have asked you.”

“He says you were sick in the head when you named me. That Dad told him things, that you were in bad shape.”

“Your father could hardly have told him anything, because he wasn’t here. He only saw the boy once, didn’t even come to his funeral. His firstborn son. And yes, I was sick. Of course I was sick. And all alone. Those were horrible months—he’d been born small, with a big head, circles around his eyes. He cried all day; we had to give him a lot of injections, he was always in pain and bad-tempered. My first son. Someone else might have been relieved when he died. Your father, for example. But for me it was like someone was yanking out my liver with their bare hands. I was alone, standing in the sun while they buried him. I don’t know how anyone could judge me. And I was all alone when you were born, too. Your father sent me letters from Tucumán, telling me about. . . just shit, his asthma and the mosquitoes.”

“And why did you give me the same name?”

The doorbell rang. His mother dried her hands on her apron and went to open the door. He heard the conversation at the front door: they were Jehovah’s Witnesses or something similar. Very politely, they asked if she believed in God, if she’d read the scriptures. His mother said yes. They asked if she regularly attended a church.

“Look, Miss, in this house we are Catholic and we are happy that way. Thank you,” she said, and closed the door.

Danielito was a little sorry his mother hadn’t let them in. He would have liked for those innocent people to come into the house. He would have liked to listen to them talk about salvation, to thumb through those brochures with drawings of smiling people eating fruit, children petting lions, sunbeams coming down from the clouds. It seemed like a thousand years since he’d eaten any fruit.

“The onions are starting to stick; you have to stir it a little, is that so hard?” his mother reproached him. She poured in a little water from the kettle and stirred.

“We named you together. It’s normal for the first son to have the father’s name.”

“But I wasn’t the first son. Your first son was dead.”

“In practice, you were the first.”

“Maybe if you’d named me something else, I’d be different.”

“You’d be the same. A person is who he is, and not because of his name. The name is no justification.”

“Maybe if he’d lived he would have been like me.”

His mother added rice and water to the pot.

It took Danielito a few seconds to attach his name to the coffin of bones, but when he did, he shuddered.

“No. After how much your brother suffered, he’s in heaven. Children are born into sin, but with all that he suffered, he paid for his sin.”

“And what sin is a baby born with?”

“That of the parents. I sullied myself to have you two. I had to fornicate to give you life.”

Danielito thought about his parents “fornicating.” His mother must have been, in those moments, maybe a little more lukewarm than the can of peas he had just taken from the freezer. He looked at the tap, which he hadn’t turned off. He watched the water falling. He imagined himself going down first through the drain and then toward the happy depths of the earth.

CARLOS BUSQUED was born in the northern Argentinian province of Chaco in 1970. He has produced the radio programmes Vidas Ejemplares, El otoño en Pekín and Prisionero del Planeta Infierno; and he contributes to the magazine El Ojo Con Dientes. He currently lives in Buenos Aires. Under This Terrible Sun is his first novel.

Download the first four chapters of Under This Terrible Sun at the Frisch & Co. webpage for the novel