An interview with Tatiana Tîbuleac 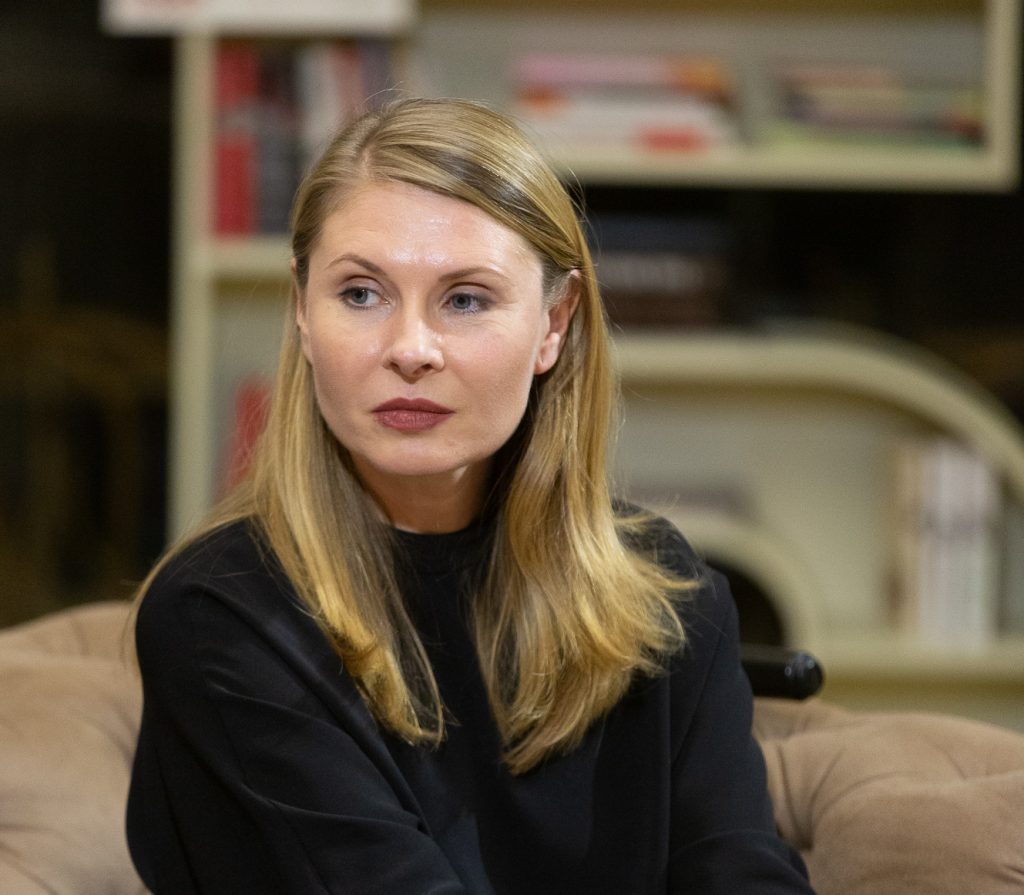 Tatiana Tîbuleac is a Moldovan-Romanian writer born in Chișinău. Her second novel, Grădina de sticlă (The Glass Garden), won the EU Prize for Literature and has been translated into ten languages. The novel is a Bildungsroman about an orphan named Lastocika, adopted by a Russian woman and set to work. Touching on themes of the Bessarabian-Romanian relationship and the fall of communism, the work ultimately is about the searching for our place in the world.

On the occasion of the publication of Bulgarian translation of The Glass Garden, Tîbuleac visited Sofia, where Simona Ilieva from the novel’s Bulgarian publisher Colibri conducted the following interview:

Simona Ilieva: It seems that the main character in your novel, Lastocika, uses language as an important identity marker – Moldavian, Russian, Romanian. Many people from the Balkans and Central Europe face the issue of identity. How does a person form a coherent and stable identity the kind of turbulence depicted in your novel?

Tatiana Tîbuleac: In a time of communication, we have become accustomed to the fact that most people use languages as a simple tool. Due to migration, children grow up speaking three to four languages fluently. With the help of the internet, anyone can translate a text in a matter of seconds. English, for example, is heard so often that you feel like you know it without ever having learned it.

That’s why it seems strange that there were times and places (and still are) where language meant more than that. For some of us, language is a struggle, part of the resistance, a flagship, a war, sometimes even a pillar of an identity. Lastocika was not just a bilingual child, and the time she lived was not cosmopolitan. It is an important distinction that needs to be made. She was not only obliged to learn a foreign language, but also to choose it against her mother tongue, in her own country. This choice came with the conviction that the new language was superior and that it was a passport to a better life. Hence her ambiguous relationship with the Russian language – this painful oscillation between admiration and hatred, ambition and frustration. Many of us – people born in 70s in the Soviet Union – had it. I dare say that we still have it and that this oscillation became part of our code.

Ilieva: How was it back then, at the time of your storyline, and how is it today, after the period of transition? Are the fragile identities of the past more solid, even if reshaped today?

Tîbuleac: To give you an example – Moldovan children born after 1990 practically don’t speak Russian. It is partly the ideological revenge of their parents, who did not want their children to learn this language at school. But first and foremost is the lack of interest. Russian is no longer a dominant language, its importance has diminished. Children choose French, English, German – because they care more about studying abroad or getting an international job at home. But to go back to the book and the period described there – my generation will always live between two languages and between two cultures. In the book I called it “the generation in between”, because it best represents the transition and everything it meant.

Ilieva: Many acclaimed writers address the topic of similar complex identities, for example, Aleksandar Hemon, Dubravka Ugrešić, Goran Vojnović, Josip Novakovich, Kapka Kassabova, Saša Stanišić, to name a few. What would you like to say on the question of language, origin, and identity?

Tîbuleac: I would say that it is difficult to forget a language that you learned as a child, even if you learned it by force. A language in which you know all the games, the stories and songs. A language in which you made your first friends and have fond memories. It is possible, but it is difficult. Because at some point you don’t know where to draw the line, where to stop hating and start admitting that it became part of you.

Ilieva: Your novel addresses an important issue, violence against women. Your character, Lastocika, experiences an involuntary accident, which she keeps a secret. How does she cope with the trauma? What should women do to break such harmful life cycles?

Tîbuleac: I would like to say that things are completely different today, after almost 40 years since the period described in the book. But I cannot. There is still violence against women, abuse, injustice. One thing has changed, though, and I think we should cling to it like a lifeline: now women can talk openly. If in my time a woman had to be silent no matter what happened to her, because shame and guilt were always hers, today societies are more open. And women need to talk. A tragedy that you share with someone can be just as difficult, but it will free you from harmful feelings such as hatred, desire for revenge, auto-mutilation. Maybe in the novels a secret kept for years has something mysterious, but in real life it is always the basis of self-destruction.

Ilieva: Lastocika’s life trajectory seems navigated by material coordinates – she dreams of a wedding dress, a black Volga like Katya’s, golden earrings, a ring with a topaz. A girl without a mother – bought, adopted, and given a life by a foreign Russian woman, surrounded and raised among a whole bunch of peculiar friends, she eventually becomes a mother of her own. She is a lonely parent, yet, she does not leave her kid. She longs for love. Has she found happiness and gained hope for a better life at the end of the story?

Tîbuleac: Not like in a Hollywood movie, true, but Lastocika managed to be happy in her own way. In the only way she learned. Happiness can also be of several kinds, not only bright, grand, to the liking of the others. Some people can be happy in a quiet way.

Ilieva: Is it possible to put everything behind, and start a new life? What effort would it take not to cling to the past but move forward?

Tîbuleac: I don’t think people can put everything behind them. Even when we say we forgive, we do not forget. I have studied this aspect a lot in recent years. How much we actually want to leave behind, and how much we want to carry with us. There are many ways to reconcile with the past: acceptance, forgetting, detachment. Of all, forgiveness seems like a supreme feeling to me. Only by forgiving will we get rid of a burden, the other options will make us feel good for a while, but the burden will come back. I find it difficult to forgive, hence the writing.

Ilieva: How can a person with a complex identity like your main character become a citizen of the world?

Tîbuleac: Who said we all have to become one? Some people leave a place, only to carry it everywhere.