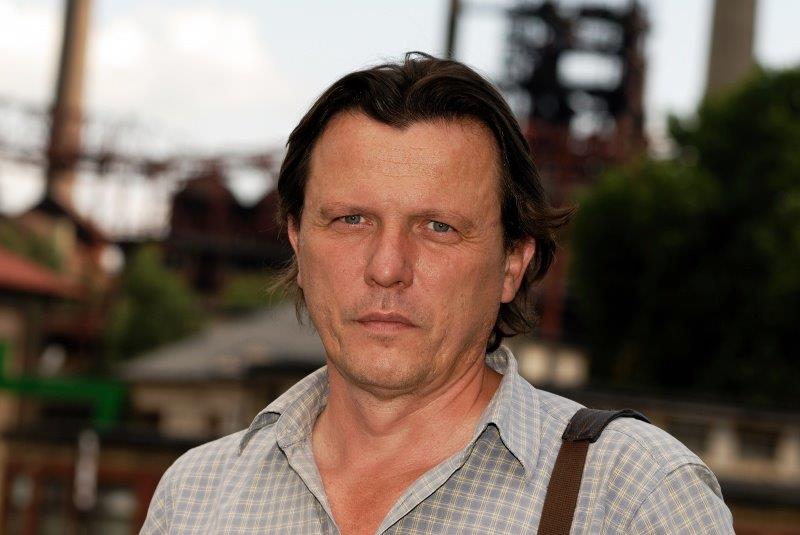 Ray Bradbury’s Machineries of Joy (1964) includes a story based on an old Indian legend. A boy named Ho-Awi and his grandfather, simply called “the Old Man,” both wake up feeling uneasy. Something is not right; the natural world seems changed. As they search for signs of disharmony the Old Man notices birds are flying south. The summer, which has just begun, suddenly resembles autumn. “Perhaps we are going away,” the man says, half to the boy, half to himself.

His instinct proves to be true once they reach the shore and see ships, “great large canoes,” bringing unknown men in armour. Witnessing the encounter of two worlds, both the Old Man and the boy are silent. As Gary K. Wolfe noted about the story’s ending, “[t]he Indians return to the wilderness, vaguely aware that some great event has happened and that the wilderness will never be the same, but not at all sure what the event is or exactly what it means.”

Czech writer Jan Balabán (1961 – 2010) read the story when he was 15 and was moved by the Old Man’s intuition that “Perhaps we are going away.” This simple sentence conveys the profound feeling that, though rooted in their land, his own people may disappear. Balabán later used a translation of the quote as the title of his short story collection, Možná že odcházíme (2004), which has become one of the most well-regarded Czech books of the post-1989 period, winning the Magnesia Litera Award for Book of the Decade in 2011. Two years ago, it was published in English, in Charles S. Kraszewski’s solid translation, under the title Maybe We’re Leaving.

With a touch of blues-like sadness, Balabán portrays modern people in crisis (alcohol, marital problems, loneliness, etc.). His stories are compact, avoiding long openings. The reader meets the characters on a walk in the mountains, during a talk with their partner, or wasting a night in a bar. In Maybe We’re Leaving, Balabán leaves out clashes of civilisations and other grand themes, but the Old Man’s observation is present throughout: his characters often find themselves in challenging situations which make them doubt and reassess their position in life.

One of the stories, “Edita,” introduces Vladimír and Edita, a husband and wife in the last stage of a divorce. By now they dislike each other, quarrel over their kids, and both have lovers. Still, after an unexpected and violent fight with her new boyfriend, Edita turns to her tiresome husband Vladimír for comfort. Suppressing his own hard feelings, he arrives at her office late at night and finds her in a desolate state. At first, she sends him away, embarrassed that she called him. Then she finally lets him drive her home and, for a while, their former connection is restored. In the story’s closing paragraph Balabán writes:

“Vladimír cruised about the streets, rather than heading straight home. They had time enough. That’s one thing they had. He drove out onto the beltway and circled the city in a wide arc many kilometres long. On purpose, he drew out the ride through the peripheral suburbs and the nearby villages, where not a single light was shining in any of the cottages. He wanted to remember this moment, driving about all night long, because in the morning, in the morning everything would be quite different.”

In “Gabriel,” Balabán deals with adult dramas only indirectly. At a cemetery, a place demanding seriousness, a young couple discusses their families. Gabriela says her parents do not get on well and describe each other in “disgusting” terms. After reluctantly confirming that his own parents have always loved each other, Timotheus points out that it is almost embarrassing to have happily married parents these days. “That’s the most stupid thing I’ve ever heard,” Gabriela replies. Later that evening, the couple makes love in the woods next to the cemetery.

Maybe We’re Leaving is a quiet book. Most of its scenes are set in private spaces, and rarely does one encounter more than three characters. The stories contain little action. Instead they rely on dialogue, and on Balabán’s speciality—a smooth interplay between a third-person narration and interior monologues. In Balabán’s introspective work, the narrator’s depictions are permeated with the characters’ thoughts.

In Czech editions of his work, Balabán does not use any textual feature to distinguish the narration and the interior monologues. In Kraszewski’s translation, however, the latter are marked by italics. This is problematic for two reasons. First, interior monologues occur so frequently in these stories that most pages of the English book are filled with italics, which may be distracting for some readers.

More importantly, in the Czech version, the line between narration and interior monologue is deliberately blurred: at times, it isn’t clear where a character’s thought ends and the narrator’s voice begins. In the English translation, the fruitful ambiguity of the original has been needlessly simplified. Let’s hope the editors will not repeat the mistake in Where the Angel Went, Balabán’s novel forthcoming from Glagoslav Publications later this year.

As both the emphasis on introspection in his short stories and the title of his novel suggest, there is a Christian element to Balabán’s books. However, this does not necessarily make him a Christian writer, as he is often labelled in the Czech Republic. There are few overt Christian themes in Balabán’s fiction. No talk of salvation, no moralising.

Yet there is a hopeful aspect in his work, perhaps stemming from his Protestant background. Balabán’s stories convey the sense that however difficult an individual’s situation may be, the experience is human, and therefore shared. As in the Bible, the stories in Maybe We’re Leaving often carry their protagonists’ first names. Balabán believed that even the miserable life of a person in the modern age deserves to be told and is no less important than the stories from antiquity and the Bible.

Jan Balabán died suddenly, in his sleep, on April 23, 2010. Ten years later, he remains highly respected among Czech critics. For foreign readers, he might represent an attractive mixture of the familiar and exotic. Influenced by both American and Russian literature, his stories will delight the fans of Raymond Carver, John Updike, and Ivan Bunin, while being firmly rooted in Central Europe.

Most of Balabán’s stories are set in Ostrava, a post-industrial city near the Czech borders with both Poland and Slovakia. The so-called City of Steel is an inseparable part of his work. In contemporary Czech literature, the once inhospitable and (until recently) uncultured Ostrava region is best represented by Balabán and the poet Petr Hruška, one of Balabán’s best friends and the editor of his posthumously published collected works.

With eight works of fiction to his name, Balabán left plenty for foreign translators and publishers to discover and work with. For his Czech readers, those books have made Balabán’s untimely leaving slightly more bearable.

JAN ZIKMUND is a B O D Y editor. He works for the Czech Literary Centre in Prague.