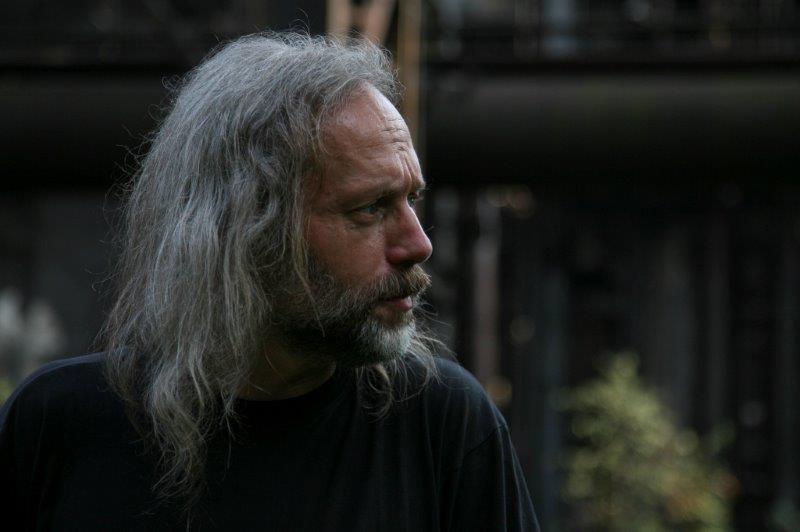 They are sitting there, flecked by the morning sun. Everything indicates that the woman will take away the mugs and then stay in the kitchen.
But suddenly she begins to talk about a blizzard in Switzerland. About gusts of wind shaking her young body so hard that she turned around, thinking it was a man’s hand. Amidst the madly whirling snow.
They sit in the sun, and he can’t understand: how is it possible he didn’t know about the blizzard in Switzerland until today.

They had already sat down on the bed. Then the man remembered the back door was still open. He groped along the hallway, past the dark holes of workshops and spaces. Past the dark holes of sleeves on the communal coat stand. The house was wide open, pulled inside out.
His hand on the latch, he saw the last stretch of snow by the hazel bushes under the roof. It lay there white and large, like an animal with its head raised, like a bared shoulder. Like, when all is said and done, several things in life. It lay there white and incongruous, by the backyard door.
He groped his way back, slowly and quietly, in case his wife was already asleep.

Maybe poplars or elms. It’s as if the wind meant to give a sermon. Your dress with the ships is billowing. I know where it usually hangs in the closet. Its yellow color, fading out in the mist by the road.
We go back to the car. We stopped for some insignificant reason, now dispatched. We’ll never find this here again, nor these trees that have been set swaying, elms, probably.

PETR HRUŠKA is a poet and literary scholar who lives in Ostrava and works at the Czech Academy of Sciences in Prague. His poetry collections include Obývací nepokoje (Restless Living Rooms, 1995), Měsíce (Months, 1998), Vždycky se ty dveře zavíraly (The Door Always Used to Swing Shut, 2002), and Auta vjíždějí do lodí (The Cars Drive into the Ships, 2007). In 2013, he won the State Award for Literature in recognition of his collection Darmata (To No Travail, 2012). He has said of his poetry: “I think that real grace and erotic love appear only where all the gloominess, stress, and weariness of life are in some sense present as well, all the ‘loneliness of relationships.’ Only in their midst can a tenuous thread of light shine, containing all the fateful nearness of which two people are capable.” Collections of his poetry have been published in German, Polish, Italian, Hungarian, and Slovenian translation.

JONATHAN BOLTON is Professor of Slavic Languages and Literatures at Harvard University, where he teaches Czech and Central European literature. He has edited and translated a collection of a hundred poems by Ivan Wernisch, In the Puppet Gardens: Selected Poems, 1963-2005 (Michigan Slavic Publications, 2007), and his translations of Czech prose and poetry have appeared in the journal Circumference, Dalkey Archive’s Best European Fiction 2018, and elsewhere.