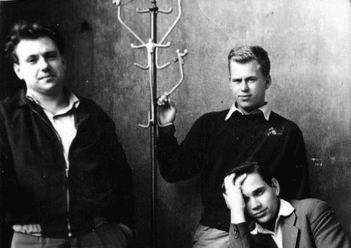 The apartments of the older Prague families
have a strange smell — perhaps the breeze
too rarely courses through the rooms and these,
their dusty bibelots, doze on with ease.

In the Czech Highlands, over its hills,
we stepped and stepped within our shadows, still
just seventeen or so, testing our will
on Old Slavonic dictionaries and drills.

Now sober and now drunk, and thus
up to our necks in feelings… History
knows this and lives in style off us.

JAN ZÁBRANA (b. 1931; d. 1984) was a Czech poet and translator, and was widely-known for introducing Czech readers to major English, American, and Russian authors, including Mandelstam, Babel, Ferlinghetti, Plath, Stevens, and Ginsberg. Zábrana published three collections of poetry during the 1960s, but nothing after that till his death in 1984. In 1992, his diaries were published by Torst Editions in Prague under the title Celý život (A Whole Life), leading to reissues of his earlier books. This poem appeared in Stránky z deníku (Pages from a Diary), which was published in 1968, a collection of sonnets that engages indirectly with the historical changes of the preceding decades, through a lyric voice emptied both of personal pathos and political stridency. Often in the poems Zábrana’s voice segues into the voices of those poets he has translated, leaving only a bare shimmer of subjectivity – humorous, oblique, pained – with which to view the days of a life.

JUSTIN QUINN has lived in Prague since 1992. His most recent collection is Close Quarters (Gallery, 2011) and he has translated the work of Czech poets, including Ivan Blatny, Petr Borkovec and Bohuslav Reynek. He is a frequent contributor to B O D Y: