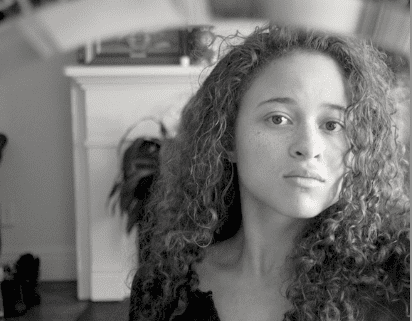 There’s dynamite inside her. She can feel it, heavy and benign just like she’s had too much to eat. This concerns the astronaut. You shouldn’t feel it, he says, starting the ignition.

The moon is like a dusty parking lot. Her hair blows back like she’s on earth, but her knuckles are white with holding to the passenger seat. The air wants to pull her away and apart. She won’t let it. A silver trail of dust lifts and spreads behind them. It’s beautiful.

Do you think we’re far enough away, she asks, when they pull to a halt, the car sitting on a shard of moon rock reaching out of the mass like an open palm.

Black billows into black ahead, like a dream. Glimmering branches of stars stretch out across her mind. They dress the inside of her eyelids when she closes them.

Do you have the fireworks?

Yes, he says, with a quake in his voice. He’s hesitant but he offers them, small and dark like chia seeds, into her hand. Put them in something, he says. Or they’ll shoot at us.

So she puts them in her shoes, takes a lighter to them and stands back. The dust is hard and sharp on the soft bottoms of her feet, like little thorns they embed themselves and lose their coolness. The seeds set off sparks and break open. Light a tree on fire in their spitting ascent. She feels heat, and the sizzling cracks. Their echoes ring like a hymn in her ears. When her eyes water, the tears suspend where she can see them, then fall back to frost her cheeks.

The astronaut wipes them away with his glove.

Aren’t you scared, he asks.

No, she says. As she watches her tears drift, tearing softly through the smoke, she imagines they’ll go on that way forever.

CHEYENNE VARNER is a writer based in Richmond, Virginia. Her work has been published in Winter Tangerine Review, Thistle Magazine, V23 Creative Magazine, Atwood Magazine, SILVIA Magazine, and Side B Magazine. Her digital booklet is called Up An Hour Early.

Find out more about Cheyenne Varner: