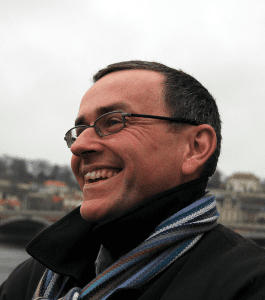 I have been easily mistaken
by the perhaps red eyes of this,
a small fly, for a side of bacon,
cheese, old fruit or piece of piss.

Why else would he or she or it,
this finikin of iridescence,
steer in my direction? Fly, admit
you thought my slumped substantial presence

was dead and cured, a massive flitch
for you to feed on carelessly
and leave your larvæ fat and rich,
dreaming of your long dynasty.

I gesture towards you with my hand,
not quite murderous, not quite kind.
In any case it seems you’d planned
to move before it crossed my mind.

Go on. Who are you anyway?
The reference sites don’t help that much.
Maybe this. Maybe that. Won’t you say?
I’m saddened that you shun my touch

and surf the wave of air in front
of my outrageous, ignorant limb.
Days in advance, you feel its brunt
it seems, that I thought merest whim.

Move away from me, do you, fly?
You seem to neither know nor care,
but you take pains, and you know why,
despite your quick insouciant air.

In time, in time, I’ll turn to text,
my flesh unmoved by the amours
that work out on the screen. What’s next
is that you’re welcome. Then I’m yours.

These songs his mother used to sing,
old-fashioned as her style of hair,
or that she wore a wedding ring,
they eased a deepening despair
amidst the shining kitchenware—
scrubbing the shirts in rubber gloves,
her eyes fixed on the distance where
a woman’s with the man she loves.

Meanwhile, the world continues murdering.
The killing fields have room to spare
for lovers as they fiercely cling
each to each as the soldiers swear—
the blade pushed in like a ploughshare.
Unsaved by stardust or by doves,
these two lie on a public square,
a woman with the man she loves.

The songs go on, one foolish thing
after another as they bear
our griefs with syncopated swing.
It seems the songs were always there,
like mothers gazing off elsewhere.
But in their turn they were spin-offs
of each fresh sadness, dreams we share—
a woman with the man she loves.

The child grows up undebonair,
and leaves his wife to wash his cuffs,
swept off to war, humming an air:
A woman with the man she loves.

The New Yorker
The Literateur