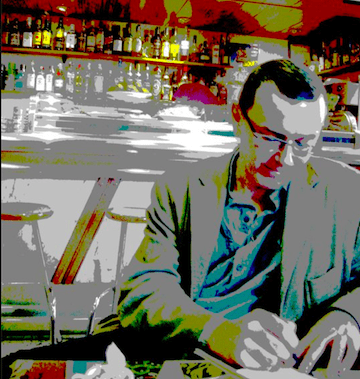 I check her photograph in those few months or weeks
when she was turning from a girl into a woman,
wading from the Adriatic, the wavelets’ peaks
around the legs, and lovely lips that I have come in.

Which isn’t praise she’d like, so let me also say
her face has hardly changed, the lines so light, a curl
just as it was. And once again, I’ve gone astray
in trying to tell apart the woman from the girl.

THE HOUR OF THE WOLF

Who would have put their money on the sun
deciding after all to climb the stairs?
Who would have thought the birds were not outdone,
still had the strength to sing and sing their airs?

It didn’t look too good an hour before.
The Man with a Briefcase, the Wounded Child
and the Woman in the Dress came in the door,
whispering ideas neither kind nor mild.

I couldn’t straighten out stuff in my head.
Back then the best idea seemed to be
to get out fast, though nothing that I said
could wake the people sleeping nearby me.

Because the Wounded Child crooned in my ear,
‘You cunt. You are the fuck-up in all this.
The Man will help you leave. But first come here.
The Woman in the Dress would like a kiss.’

But now they’re gone. Their malice and their violence
are blown away by morning’s breezy airs.
Four solid men approach and lift in silence
the different crates and boxes down the stairs.

An illustrated magazine. A cup
of half-drunk coffee. The house a bathyscaph –
old records playing on the phonograph
mixed with the sounds of someone washing-up.

Before lunch, there was chilled vodka and lime,
then beef and beer and dumplings. A rich flan.
I am going to fall asleep on this divan,
in Central Europe, peaceful in our time.

The larger powers, price-fixing gas and grain
across the markets, advance and then retreat.
Great clouds against blue sky build up and bloom.

A fly is bickering with the window pane.
I slowly wake. My wife has come in from the heat.
We talk, then go to find a quiet room.

B O D Y
The New Yorker
The Literateur