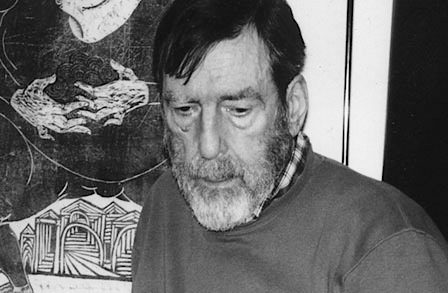 Natalie Belz remembers the late Russell Edson, who died last week at the age of 79. Edson was known as a master of the prose poem.

esterday I recited Russell Edson’s “Mr. Brain” as part of my English class’s poetry unit. Whereas most students had picked a more recognizable name such as Robert Frost or Emily Dickinson, my first thought was the late Russell Edson. Though I’m not a great memorizer and had a hard time reciting it, as I learned it, the simple, exquisite weirdness and beauty of it made it feel like my own.

Edson’s appeal is not of existential nature, nor deep perception of reality, life, love, humanity or other such poetic ideals. What makes the poetry of Russell Edson beautiful is the impersonal and powerfully absurd nature of his writing.

Growing up I was heavily influenced by the creative process and poetry of my father, Aaron Belz, who I think is unlike most others in his field. Much of his poetry is written like the stream of consciousness of an educated child. I’ve been attending readings of his poetry for as long as I can remember; a little kid going on road trip after road trip to similar bars, coffee shops and bookstores across the country. I’ve heard every poem many, many times, and each time they’re read I witness the same fresh wave of laughter from a new crowd of the artsy hipster types. All these years I’ve been subconsciously absorbing, analyzing and digesting his way of thinking through his words, having a vital impact on my own understanding of creativity and art.

In my childhood, my family and I were also quite fond of the Japanese director and animator Hayao Miyazaki. We especially adored Spirited Away, Castle in the Sky and Kiki’s Delivery Service. Although designed for children, these films are extremely artful and deep, and equally entertaining to adults. It’s incredible to me that the work of an elderly Japanese artist connects just as easily to a child’s mind as to the more mature, adult way of thinking. We still watch all of his movies. Some we’ve seen like 30 or 40 times.

The philosophy of artists like Miyazaki, Pendleton Ward (creator of Adventure Time), and my father, relies on youthful apprehension, and so, I’m realizing, does Russell Edson’s. I first found his poetry by picking up The Tunnel: Selected Poems from my dad’s coffee table several years ago. The gateway to my appreciation for the book was “Counting Sheep,” which begins:

A scientist has a test tube full of sheep. He wonders if he should try to shrink a pasture for them.
They are like grains of rice.
He wonders if it is possible to shrink something out of existence.

I had flipped to it by chance. The stream of consciousness writing and the lighthearted absurdity were both warmly familiar, and I quickly fell in love with every word my eyes discovered in the book. Perhaps I needed an escape from my dad’s worn-out narratives, and my comprehension was still too immature for poems about the adult-world, and so I devoured what I had in front of me.

Russell Edson’s surrealism comes from reverting to complete childishness. In this way he is able to reflect purely subconscious thought. Through contrasting any ugly or changing environment with internal “made-up” conflict/understanding, his speaker is comparable to the oblivious characters of a (much loved) David Lynch film, Eraserhead. He ties Salvador Dali-esque imagery with a spec of self-psychology in “The Kingdom” in which the speaker confesses, “I have been living in my mind. Pain rides in. I no longer care; the king is sick with doubt” as his watch melts on his wrist. His childish thoughts, written out on paper, are reversions to a reality that feels like home.

What I got from encountering Russell Edson as a younger person has carried into my a-little-bit-older-person life. It has been contributed to my collection of formative artists, shaping my mind and creative thinking, and colored my glasses. If time allows, I can carry this into my own morphing and changing future. I will take these beautiful little details to something new, something wonderful and spontaneous, my own reflection of the glorious and undeniable subconscious that quietly informs our existence. Russell Edson gave me a window through which I can watch apes, angels, sheep, old men, dogs, grass and children interacting on the same weird level.

NATALIE BELZ is a freshman at Cedar Ridge High School in Hillsborough, North Carolina, where she hopes to complete the International Baccalaureate Program. Her writing has appeared in The Curator.