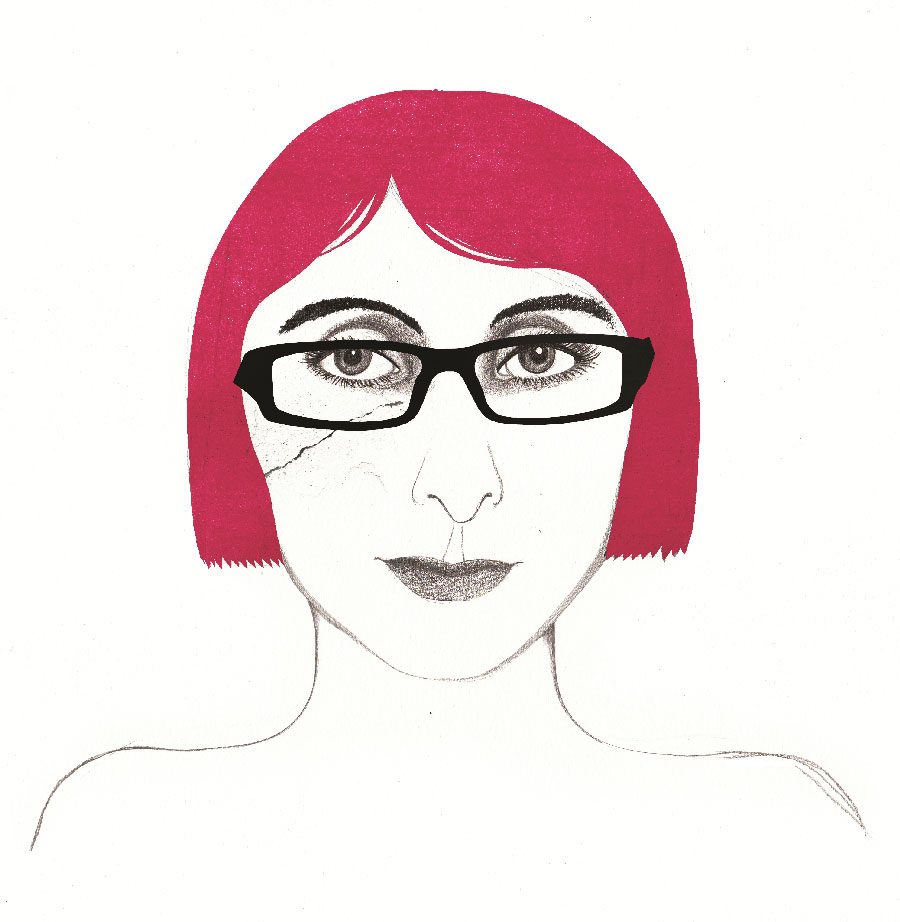 You come out from the garden, abandoned for some time now.

The tall grass follows you up to door, like a verdurous head of hair anxious to invade the house.

Your footsteps leave behind the stone staircase leading down to the crypt, bringing you before the smoldering chimney in the hall.

You lean toward the remains of the last fire that burned within, a holocaust of antique dolls.

You look outside through the dining room curtains, playing the part of a melancholy ghost for the unlikely living passers-by who notice your shadow in the window from afar.

The books closed tight keep quiet in the library.

You hear a frantic canter coming from the kitchen. It’s the washer trampling the clothes, lathering up your bloody conscience.

Upon passing the door to the master bathroom you make out a black reflection in the tub. You distract yourself by putting a bibelot face down in the children’s bedroom.

Whispering death threats in the dolls’ ears in the playroom.

You wind up climbing the stairs.

Thirteen steps you’ve counted now, thirteen, that lead you to a dark attic.

The first dollhouse referenced in history was that of Duke Albrecht V of Bavaria, who ordered its construction in 1558 in order to spoil his daughter. In the countries of northern Europe it quickly became the favorite plaything of countless fair young ladies. Perhaps because the cold allowed them to understand such unspeakable secrets better than the señoritas of the Mediterranean clime, to understand the most perversely interesting stories that are kept behind doors, in the interior of one’s own bedroom or the sitting room.

We play together. I tear out his blue eyes and place them in my palms like marbles. He tells me what he sees.

in the MASTER BEDROOM

Each night the ghost of my first wife circles the bed where I sleep with my second. It doesn’t bother any of us much.

in the DINING ROOM

Death arrived soon after. We all saw her climb up your hair, but we lowered our eyes and continued eating. Praying underneath our breath that she settles for you.

I like opening the fridge and finding you there.

It takes place each first of November, in an old city to the North. The houses shudder and the families brace themselves. It’s tradition that the chair once exiled to the attic be returned and placed beneath the same stretch of roof that the deceased used to occupy, that which his loved ones learned to forget when the coffin lid closed. He returns once a year, mangled by earth and wild plants, uncomfortable in a funeral suit, far away in a state of un-remembering how to use a fork, in this un-knowing how to give thanks or to escape conversations that invariably begin with a sad “Down below we usually…”

You have small hands, she said—a hint of disappointment in her voice—to her murderer.

Major moments in history: Anne Boleyn and Marie Antoinette walk into a salon.

in the MONSTERS’ ATTIC

Without anyone taking note, I killed all of the girls at school with the same name as me. I couldn’t bear so many. I did it for their own good, so that the nuns wouldn’t go crazy shouting our names through the halls, so that we didn’t mix ourselves up and become one another without our realizing it. Some of them understood. Others didn’t. They died smiling, in the showers on the second floor, in the gym, with a goofy grin, their lives and their bodies taking on too much importance. I killed all of them with the same trembling care, shrugging my shoulders as I moved away from those shadow girls who would now be known by no other name.

God was the first to mourn the devil’s passing, like a melancholy widower who would nod off, cursing his slow reflexes. He became transparent for a few moments; he could be seen peering down into the cities, scanning the windows with his slain lamb of an eye. He cried with the theatricality of a drunkard, he pulled at his silver mane, screaming out for his brother, begging him to say where he was, so that he could follow him, becoming white and good and great once more. One day God was dead, properly this time, and the sky dawned withered and gray, like a hotel bed. We were left on our own. Chaos ensued, suicides followed. It didn’t last very long. Someone went looking for his child’s doll and brought it before the rest. One of the elderly stifled a groan of relief. He was the first to make the sign of the cross.

My best friend told me during recess:
You know, you’re going to die someday too.

I remember when we confused death with a swing.

PATRICIA ESTEBAN ERLÉS (Zaragoza, 1972) holds a degree in Hispanic Philology from the University of Zaragoza. Her first four books of short stories have garnered ample acclaim for their eerie and unsettling sense of vision. She has been widely anthologized and her most recent project Dollhouse, from which the following stories are taken, has been hailed (by Eñe among others) as one of the most unique books of flash fiction to come out of Spain in the past decade. She currently teaches creative writing workshops and maintains a literary blog.

MEGAN BERKOBIEN is pursuing a PhD in Comparative Literature at the University of Michigan. She holds a B.A. in Comparative Literature from the same university, where she founded the school’s undergraduate translation journal, Canon Translation Review. She has worked as assistant editor at the online magazine Asymptote as well as editorial intern at Words without Borders. Her translations have been published in Words without Borders and Palabras Errantes and are forthcoming from Ox and Pigeon and Asymptote. She is currently dreaming of Barcelona. Visit her website megberkobien.com