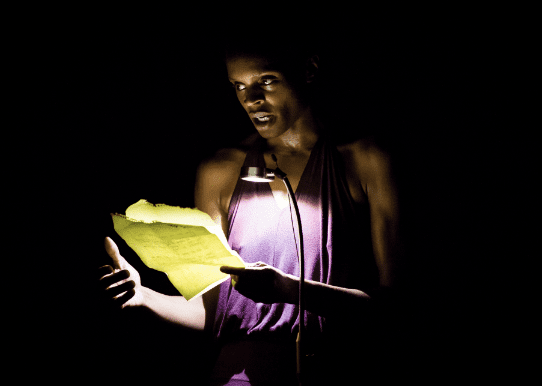 an excerpt from   BRONX GOTHIC

Editor’s note: Bronx Gothic is a solo show, written and performed by Okwui Okpokwasili. She describes the text as: “a blueprint, a skeleton for how the whole piece lives in the world – there aren’t really stage directions or lighting cues or even choreographic paths. It is almost pure text, with songs written out and simple delineations of choreographic breaks – the first thirty minutes is designated as “quake movement”, there is also “broken body”, and “middle passage”. I have NOTES and SONG to make it clear that some passages are read and some are sung.”

you better gather your skin girl
pull it together

I got to get cigarettes.

He still watching you?

Yeah, when my mother’s at work.

He’s nice to you?

He let’s me smoke his cigarettes.

Does your mother know he does that?

Dear You,
Cause I’m not gonna say you’re name you’re such a wrong bitch. I thought I could just be through with you but I can’t until I write you this. Ever since you got that new double dutch rope and don’t let anyone touch it if you’re not playing, even when you’re sitting right there, and you just don’t wanna play, you still won’t let anyone touch it cause you’re not jumping, ever since you won’t even just let the rope be on the ground cause you don’t want it to get dirty even though it’s a jump rope and that means it got to touch the ground and our sneakers too so that just don’t even make sense, ever since then I knew you could be a selfish bitch but I should’ve known that selfish wasn’t just something that comes on you for a minute or an hour but that selfish is something deep and long lasting like bad breath or stinky underarms which yours are because you don’t even know you supposed to shave under your arms when you start growing your hair there. But I still tried to always see your good side because sometimes you did give me your last grape now & later and I know how hard it is to give up your last now & later because it lasts so long and is so good to suck on at the end of the school day before you get to the candy store to get some more. You can’t be a bitch and give me your last now & later. Or so I thought! Cause it turns out you are the blackest, dirtiest, ugliest, smelliest, from the shittiest dirt on the street bitch that I ever knew. And if you want to fight me you know I’ll be ready for you. Your clothes are always dusty, wack, cheap and out of style. All you got is that double dutch rope. I’m not gonna say I hope you burn in hell cause that might bounce back off of you and stick onto me. I am gonna say I know now you were never my real friend. You said Eric busted my cherry when I’m going with Ricky and Ricky busted my cherry and it took a long time for me to let him. And don’t even try to deny it because Millie told me you told her and she never lies. Now Ricky says he can’t stand me. Do you know what you did? Do you?  You don’t know what love is. You don’t know what fucking is. You’ve never even had a boyfriend, because you’re too ugly. You a baby in your mind and body because you don’t even have your period yet. And I still was always nice to you! Do you know what I go through? Do you know how hard it is for me to love somebody? Do you know how hard is it for somebody to love me? Do you know how long I waited before Ricky busted my cherry? So he wouldn’t think I was a nasty slut? Now he says I lied to him and tried to pretend like I was a holy virgin when I’m dirty and he’s gonna gang rape me and beat the shit out of Eric. So fuck you because now that’s it for us. I can’t tell you anything about me anymore! And I was waiting to tell you everything but now it’s too late. Now I have no friends and don’t count Millie because I know she tells the truth, but she’s mean and beat me up four times last year so she don’t count as a friend. But she’s still better then you. You are a bitch. I needed you but you are a bitch! One day you’re gonna look at me and wonder how all my dreams come true and yours go to shit and I’m gonna know it’s because you are a bitch. Do you know that I am in pain, true pain right now, because I’m scared and I can’t trust nobody! nobody! Even in my own house, nobody!! If you knew everything about me you would wonder, “how does this bitch survive!” how does she survive inside, without everything turning black and ugly!! How does she survive the blackness inside of her! How does she survive people breaking in and doing graffiti up all inside of her?! How does she see the flowers and the bees at the park at the Oval? How do the naked mermen and mermaid sculptures spitting water in the fountain bring a smile to her face when inside she’s as black as hell? That I’m locked inside myself like it’s a prison cell with a toilet full of shit and I don’t know who got the key. Who got the key? Who got the key? Who got the key? You know? No, you don’t and now you’ll never know! You’ll never know and I’m sorry for you! Because this is the last letter I can write to you, ever. I can’t ever forgive you and that only makes me hurt even more inside. We can never help each other feel love. And that’s sad and that’s how it is you fucking bitch! Have a shitty life, (and just in case that bounces off of you and sticks back on to me I mean have a nice life).

You don’t give a fuck about me anyway so don’t think I’m gonna give you the satisfaction of writing my name.

My heart is a jagged rock. Don’t make me pull it out and cut you.

What does your mother say about me?

She’s looking at a shadow.

What does that mean?

See Okwui’s “In Performance” video for the New York Times.
Read more about Okwui Okpokwasili and her residency at Baryshnikov Arts Center.

Her previous piece, Pent-Up: A Revenge Dance described as “ruthlessly clean and clever” by Helen Shaw of Time Out NY, premiered at Performance Space 122 and received a 2010 New York Dance and Performance (“Bessie”) Award. The New York Times has described her as “incandescent”.

Her work in multidisciplinary performance is best exemplified by her ongoing artistic collaboration with Ralph Lemon, the Bessie Award winning Artistic Director of Cross Performance. After completing the 2010 tour of Lemon’s “How Can You Stay…”, she performed an extended duet with Lemon in the Atrium at MOMA in conjunction with the exhibit, On Line: Drawing Through the Twentieth Century. Okpokwasili also received a Bessie Award for her performance in the final part of Ralph Lemon’s Geography Trilogy, “Come Home, Charley Patton”.

She is a 2012 MANCC Choreographic Fellow, 2013 NYFA fellow in Choreography and a 2014 FCA grantee for Dance/Performance. Okpokwasili is a graduate of Yale University.