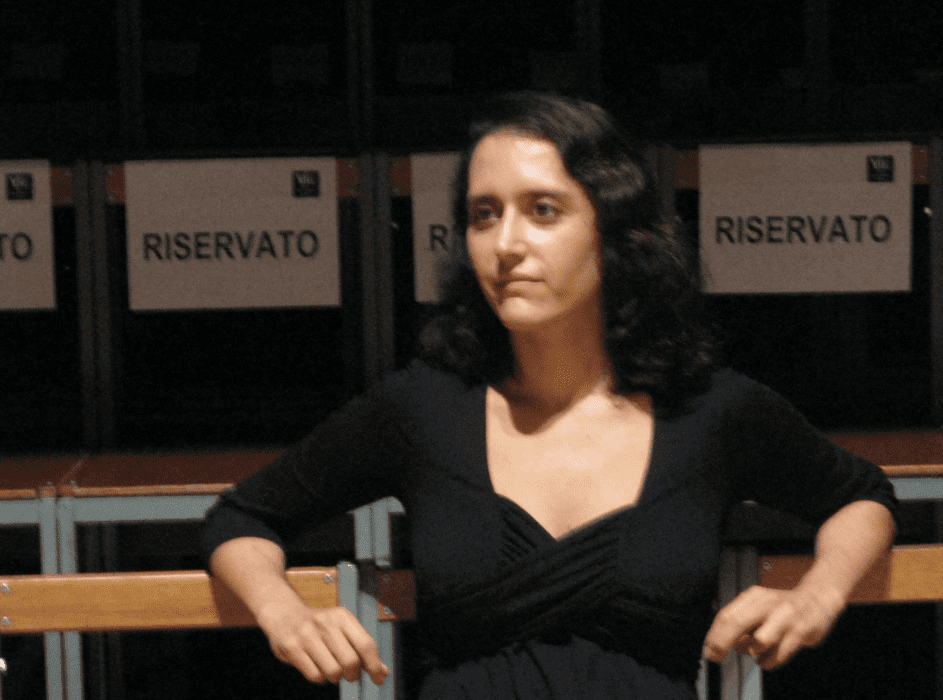 Say What You Need To – An Interview with Christina Masciotti

Christina Masciotti’s work has been produced for the past ten years in downtown New York, and her most recent play Vision Disturbance was hailed as a showcase for her “gift for writing” by Ben Brantley in The New York Times, and went on to be selected as one of the Top Ten Plays of 2010 by Time Out New York. It was featured in The Public Theater’s 2011 Under the Radar Festival, and has been translated into German, Spanish, and Italian for ongoing international tours.

Next up is the TNT Festival in Boston, where Vision Disturbance will be presented for four performances from Feb 20-23.

I first saw her work in 2002, and everything I’ve seen since (at least one play a year) has been unlike any other theater I’ve encountered.

Q. Where do you think your work falls in the spectrum of contemporary American theatre?

A. Well, at one end of the spectrum you have traditional conventions, of character and dramatic action structure, and then at the other end you have the conventions of experimental theatre, of breaking the narrative and general meta-commentary.

My work draws from both ends. My plays are story-centered and character-driven and each has a plot. I make use of those traditional conventions that audiences use to orient themselves.

But at the same time, all my plays disorient the audience through more experimental means. First, there’s no exposition to latch onto, you’re dropped right into another world without signposts. To get your bearings in the story you have to listen carefully to decipher what’s been said.

Generally, I’m less interested in adhering to theatrical conventions and more focused on how the audience will encounter the world of the play.

Q. The New York Times described your use of language as allowing the characters to achieve “eloquence, not despite, but because of their awkwardness and uncertainty.”

A. I think that’s true in general of people’s speech, and I respect that. Spoken language is paramount in my work, sometimes to a disconcerting extent. Partly because I grew up in one of many American families where more than one language is spoken at home, and each member of the family has more facility in one language than the other. I was struck by the ways a new language emerged out of that situation– where there’s misappropriation of idioms and this huge gray area where nothing makes sense. You have to draw on context to figure it out.

And, really, this happens all the time. You have to stop and think about what must have been meant, but wasn’t actually said. Words are inadequate for all of us. I make no attempt to mask that.

And since we’re all experienced at being ill-equipped ourselves, and listening to our equally ill-equipped family and friends and so on, we all figure out ways to ferret out meaning from statements that, if they’re written down, seem pretty odd. I allow for that oddness without explaining any of it away. Explaining is for outsiders; it automatically puts the audience at a distance. I would argue my work asks the audience to have a more intimate experience because I’m not polishing off any of the weirdness or surface wrongness of how people speak, and so the audience gets raw access to all of it and they have to decode the speech, and thus the characters and the story themselves, by listening.

Q. In SOCIAL SECURITY the communicative limits of language are further amplified by the fact that the main character, June, a retired pretzel factory worker, is deaf from 40 years working with machines.

A. She relies on reading notes, and basic lip-reading. That adds another layer to discern, or “mis-discern.” She hears what she needs to, which is a tendency certainly not limited to the hearing-impaired.

Q. In ADULT you have another seemingly classic story about a deadbeat dad trying to reconnect with his 18 year old daughter, but the way they communicate, and the holes they fall into when they don’t understand each other, becomes a third character in the story.

A. That gap between them throws every scene for a loop. It’s a culture clash, and a generation gap, and it foils every attempt at a conversation. Yet they keep trying. They don’t give up trying to get through to each other.

Q: Then there’s VOLUNTARY COMMITMENT, about a family scrambling to deal with mental illness. Two sisters in their 30’s, one of whom is hospitalized for the first time, and their parents, one of whom is depressed. Again, their struggle to communicate is an intrinsic part of the story.

A: It’s hard to talk about something you don’t understand. They have no idea what’s happening: what it means about them or how to help, and they all scatter in the face of this bottomless thing threatening their family. Eventually, they each find ways to move forward, but not in the same direction.

Q: I have the sense that all your plays have featured characters as they confront other people’s understanding of their lives– June, Mondo, Stanley– they all used to have lives in which they were known. But in the space of the play, they get disembedded from that context – whether through divorce or retirement or emigration or a hospitalization – suddenly they have to talk about themselves.

A: Stanley has to start talking if he wants his daughter to know who he is. All of them are confronting circumstances where they have to communicate with some external force that is appraising or almost judging them. Who they are, what they are capable of, what they owe, and what they are due. They have to tell stories about themselves because– you have to represent yourself through words, that’s all you have.

CHRISTINA MASCIOTTI’s plays have been produced or developed in New York at venues including PS 122, HERE, chashama, the Ontological-Hysteric Theater, Abrons Arts Center, New York Theatre Workshop, The New Group, and CUNY’s Prelude Festival. She has been honored as a Berks County Community Foundation SPA Fund Fellow, a multiple-year finalist for The Princess Grace Award, and a nominee for the Susan Smith Blackburn Award, the Barrie and Bernice Stavis Playwright Award, and the Francesca Primus Award. Her work has been supported by The Greenwall Foundation, NYSCA, the Independence Community Foundation, LMCC, and The Puffin Foundation. She studied playwriting at Brown University and earned an MFA in Dramatic Writing from NYU’s Tisch School of the Arts.