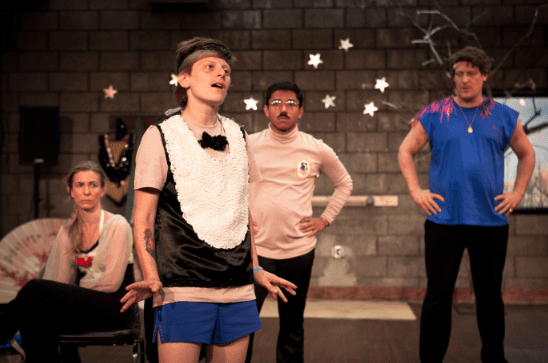 an excerpt from
HOUSE OF DANCE

(Close space! Close the kangaroo’s pouch! It’s warm in there.)

A tap dance classroom with mirrors, a ballet barre on the upstage wall, and a piano on stage left. If possible, there is a window to the outside, with a view of trees in the distance and a fading sunset created by a diorama placed in the window space that is there so that Brendan can be seen entering by passing by the window – and it allows for the sense that they are within this classroom in a small town at dusk. If there is no window, perhaps one can be created scenically, and while the window is nice if it can be there, it isn’t necessary if not possible.

The play takes place one evening in the classroom.

At the top of the play, the classroom is empty, no lights are on.

JOEL enters through the door to the classroom wearing his winter jacket. His tap shoes are already on. He stops to look at himself in a downstage mirror, does a tap move, then counts off under his breath and does a solo dance in silence punctuating it occasionally with claps or snaps as the lights fade up just a bit.   JOEL finishes his dance, adjusts his glasses, and smooths his mustache. His gaze remains on himself in the mirror. Music rises up and plays throughout the following sequence.

MARTLE enters wearing his winter jacket and tap shoes. He sees JOEL, pauses, and turns the classroom lights on with the light switch next to the door.

Both move towards the piano stage left and begin to prepare for class, removing their winter jackets and hanging them on hooks, checking their cell phones, etc. Underneath their winter jackets they both wear pale purple satin jackets with the House of Dance insignia on them. Joel dusts the piano and sits down preparing to play. MARTLE crosses to stage right center, turns back to face the piano and begins to tap in place, basic warm-up taps. JOEL turns in his chair facing the audience and taps in time with MARTLE, but not looking at him. He then stands up and crosses stage right until he stands directly in front of MARTLE. JOEL looks up into MARTLE’s face.

The music falls away.

MARTLE
(Gesturing to his lip.) You’ve got some gunk.

JOEL
(Turning away, bringing his hand to his mouth.) Oh god.

The music rises up again. JOEL returms the piano.

He places his hands on the piano and lowers his head.

MARTLE removes his satin jacket and begins to get out the tapping boards (boards roughly three by four feet that they use to tap on) in preparation for class.

LEE enters through the classroom door. They stop and look across the room at MARTLE who looks back. JOEL remains at the piano.

MARTLE crosses to LEE and raises his hand above LEE’s head. (Pause.) LEE reaches up and returns MARTLE’S high-five.

The music that began when MARTLE first entered the classroom has faded out. JOEL occasionally plays a short section of a song on the piano.

LEE crosses to the coat rack near the piano and begins to remove their winter coat, also revealing a pale purple House of Dance satin jacket and the same school t-shirt that MARTLE wears.
MARTLE is laying out two boards downstage center that they will tap on.

LEE
(Standing and looking at MARTLE.) Do you know Teen Tap Dance Road Show on TV?

LEE
Do you think they’re good?

MARTLE
Well, I’m not a teen.

LEE
(Walking over and standing directly in front of MARTLE, looking up at him.) But you’re a tapper. If you make it, you get to go around. Shouldn’t you be encouraging my
wings?

MARTLE and LEE turn abruptly at the sound of the knock. A woman’s face is seen at the window, lifting their hand in a slightly desperate wave.

LEE looks back and up at MARTLE disconcertingly.

LEE
Yes. (Pulls away from MARTLE and removes a cell phone from their pocket which has just buzzed.) My stepfather. I’m not running a limo service.

LEE places the phone on piano and turns back to MARTLE.

LEE
There are tryouts tomorrow at the town hall. I see this. I want to go. So I need to prep for Solo Dance Starter 1 or 2 level contest prep. Also then … which sort of costume I should wear.

JOEL sings two lines of the “House of Dance Theme” accompanying himself on the piano.

LEE and MARTLE go upstage to the ballet barre to do intro tap exercises as JOEL accompanies on the piano. They have each tied on a ribbon across their forehead to wear as a headband.

They both face the same direction, one hand on the barre, as MARTLE counts into their first repeated shuffle exercise. MARTLE has a view of the upstage window and suddenly BRENDAN (who was the woman knocking at the window earlier) is clearly visible. When she realizes that MARTLE and JOEL has seen her, she dashes off. LEE has not seen her, but realizes that MARTLE is rattled and says “Martle?” to him. MARTLE instructs LEE to turn and do the exercises on the other foot, which they both turn and do. When they complete this cycle, MARTLE gestures to JOEL to hit some beats.

JOEL clicks his remote control and beats are heard as MARTLE and LEE cross downstage to the tap boards where they each stand on a board facing center.

MARTLE and LEE do lunge stretches at the same angle facing upstage for eight beats.

MARTLE and LEE turn at the same time and do lunge exercises facing downstage for eight beats.

MARTLE then counts into a tap exercise (could be “Shuffle, ball, change” or an equivalent) that they do both facing forward.

They move through the exercise for a bit.

MARTLE
Are you having fun?

LEE
Yes. But I’ll have more fun if I can go to the contest and get out of here.

Seated at the piano, JOEL removes a small bottle of alcohol from his bag and it slips from his fingers clattering to the floor. MARTLE and LEE, still tapping facing forward, turn their heads to see what happened. JOEL reaches for the bottle looking up guiltily at both of them.

Suddenly a sound is heard at the classroom door.

MARTLE rushes to keep the person on the other side (BRENDAN) from entering.

BRENDAN is never quite visible in this moment. but perhaps a flash of a tap dance cane is seen and you hear her cry, “My onesie!” as MARTLE manages to shut the door and keep her out.

LEE has come to the door to see what the commotion is and looks up a bit bewildered, scared, and curiously at MARTLE, who shares a look with JOEL and then guides LEE back to center to continue working.

As MARTLE restarts tap exercises with LEE center, BRENDAN crosses by the upstage window pretending to wave goodbye at JOEL who is watching her. She then scoots back past when she thinks no one is looking.

At the same time, BRENDAN has quietly opened the door and snuck into the classroom without MARTLE noticing. JOEL sees her and in an attempt to not further disturb the solo class, gestures to BRENDAN to be quiet and tries to cut her off from getting further into the class.

They have a sotto voce argument upstage. BRENDAN gets more heated as they whisper until she stamps her foot (she’s already wearing her tap shoes).

MARTLE
I just told you, you’re not supposed to be here.

BRENDAN
I … I just need a place to work for a little that’s inspiring.

MARTLE
You need to not be standing.

BRENDAN crumples a bit in an attempt to follow this direction, then grabs one of the tap boards resting by the window and begins to drag it downstage by the chair that sits downstage right.

JOEL returns to the piano.

MARTLE and LEE return to their tap boards and set up facing forward to continue their tap exercises.

BRENDAN has placed the board on the ground by the chair. She is still holding her tap dance cane and a classic LL Bean tote bag with her initial on it. She lifts one leg to stretch on the chair.

BRENDAN
(Interrupting the tap lesson.) I’m so close to finishing … my project.

MARTLE
(To BRENDAN.) You need to zip it.

MARTLE
This is a solo class. (LEE peers from behind MARTLE and shares a look with BRENDAN.) This … we … have a big contest tomorrow. Solo Dance Starter 1.

BRENDAN
Okay fine. I … just need a place to work for a little. (Suddenly runs upstage of the piano, by the window.)

MARTLE
(Exploding.) You can’t be in this room right now! This is a solo class! You have to go!!

BRENDAN looks at MARTLE, then runs towards the door. MARTLE follows behind. BRENDAN suddenly swerves, almost falling, and darts to the downstage chair and stands on the tap board she placed there earlier. MARTLE stops.

MARTLE
THIS IS A SOLO CLASS/

LEE
(Trying to calm the situation down.) She can stay! (Pause.) Besides, she’s holding a good-for-one free class pass…

BRENDAN sits in the chair holding up a House of Dance class pass she has pulled from her bag.

MARTLE
(To BRENDAN.) Let me see that.

JOEL
(Walking over from the piano.) It’s probably expired. (He grabs coupon from BRENDAN’S hand, reads it, and slowly crumples it as he realizes it’s still good.)

MARTLE
(To JOEL and LEE.) Take a minute.

They all process the implications of BRENDAN being in the room.

Eventually, JOEL walks back to the piano. MARTLE walks LEE to their tap boards to continue class. BRENDAN remains in her chair.

BRENDAN
It smells exactly the same in here.

TINA SATTER is a Brooklyn-based writer and director who makes plays, performances, videos, and music. She is Artistic Director of the theater company Half Straddle founded in 2008 and awarded an Obie grant in 2013. Her recent critically acclaimed show, House of Dance, about a transgender tap student, opened in October 2013 commissioned by Richard Maxwell’s New York City Players and named a New York Times Critics Pick. Her play, Seagull (Thinking of you) premiered at PS122’s 2013 COIL Festival following residencies at MASS MoCA, New Museum, and Abrons Art Center. It tours to France and Croatia in fall 2013 and spring 2014. Her play In the Pony Palace/FOOTBALL was named a Top 10 Show of 2011 by PAPER Magazine, among other honors, and FAMILY was named a Top 10 show of 2009 by Time Out New York. Her work has been curated into seasons at The Kitchen, PS122, Incubator Arts Project, the Bushwick Starr, Prelude Festival, and Ice Factory Festival. Her play Away Uniform had its European premiere at Culturgest in Lisbon, Portugal in October 2013. Her next full-length show premiered at The Kitchen in January 2015.

Tina was named a “2011 Off-Off Broadway Innovator to Watch” by Time Out New York, was a 2013 Kitchen L.A.B. resident, and featured director at Culture Project’s 2011 Women Center Stage Festival. She has been a guest artist and teacher at Princeton University, Reed College, and Fordham University. Tina attended Mac Wellman’s graduate playwriting program at Brooklyn College and received a B.A. in English from Bowdoin College and an M.A. in Liberal Studies from Reed College.

…. and more about Tina and her company HALF STRADDLE