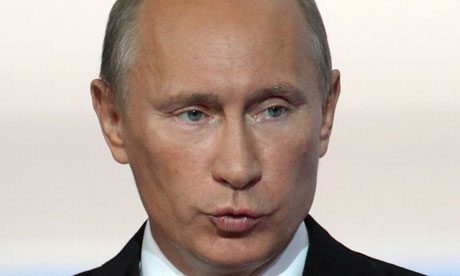 There are no real winners in the present stalemate in Ukraine, but one must concede pyrrhic rhetorical victory to neo-conservatives who shouted about Vladimir Putin for years. They were right. This may seem trivial given real lives are at stake in the interim, but it is also a lesson in the inattention that led to this catastrophe and the underpinnings of Russian kleptocracy.

After the Iraq debacle and that “End of History” snafu, the neo-con project was due for a little prescience. Their dark and dated world view still has a worthy adversary in another throwback, Putin. As others looked away and left Central and Eastern Europe to its own devices, the neo-cons howled bloody murder at everything Putin did. This once had the look of alarmism, but with the Crimean peninsula now occupied it looks like clarity of vision. If it often seems the neo-cons are stuck in a binary good versus bad mindset, it is because they often are. But so is Putin.

Some with left-leaning pretensions were also wary of Putin the autocrat, and neo-cons need not have a monopoly on a value-driven vision for international politics. Today, any democrat (small ‘d’) worth their salt can’t help but be inspired by the recent public uprising in Kyiv. Barricades and persistence, not bankers or backroom deals, were the ultimate arbiter of what transpired in the Ukrainian capital. This was a genuine revolution, one complete with heroes who faced down vicious violence and martyrs literally bleeding for the cause. The events on the Maidan and elsewhere were the epitome of public engagement in politics and people not only seeking to, but actually creating their own destiny.

Neo-cons deserve credit for their stubborn fixation on Putin, but it is also impossible to remain blind to the fact that the global regime that they and their allies created is also what allows Putin’s system to exist. Fond of causally linking free market ideology with political freedom and advocating unfettered capital flow across national borders, they opened the door for Putin and his cabal to pilfer from their own country and move that money around, wielding influence where they see fit. Now, as the situation demands that such flow is cut off, many are either unable or unwilling to turn off the spigot. Whereas the Cold War allowed neo-cons to clearly juxtapose their vision for the world with that of the Soviets, today the Putin regime has not only appropriated market economic oratory, but perversely harnesses the flaws of the existing order for its own means. In Russia, this serves to prop up what Ivan Krastev has called “vegetarian” authoritarianism and Peter Pomarantsev a “post-modern dictatorship.”

As such it is impossible not to connect Putinism, and thus the Ukrainian invasion, with the dogma of finance. It remains true that economics have globalized, and that politics lag behind. It remains true that this has allowed the wealthy, powerful and corrupt to exploit existing advantages even further – to the detriment of everybody else, not to mention international order itself. It is also the case that such phenomena are expanding not receding. Sensible people see all these things, but lamentably as George Orwell once noted “sensible men have no power and, in too many cases, no disposition to sacrifice themselves.”

The sensible men and women of the European Union continue to safeguard Russian assets kept in the City of London, Cyprus and elsewhere. This is to say nothing of the Swiss or the general role of petroleum products. Curbing the movement of capital for those at and near leadership in Russia is undoubtedly a policy that could make the occupation of Crimea increasingly painful. If nothing else it would be appropriately retributivist. The United States has attempted to impose sanctions, but wields paltry influence in this area. Most of the money siphoned out of Russia proper ends up in Europe. There is reason to doubt how serious any sanction-like EU action would be, wary as its leaders are to upset bankers and brokers. Beyond the current crisis, these dynamics are a powerful reminder of the risks underpinning laissez-faire commerce. Alas, larger ideological discord is best left for some future conference hall, seminar or barroom – for now.

Putin, we can agree with our ad hoc neo-con allies, is not a sensible man. Any barroom debate with him is likely to end with a vodka bottle to the head, even as Putin denies responsibility and maintains one is concussed for their own good. Moral victories in such cases are less than satisfying from an emergency room gurney, or for the 80 or so Ukrainian protesters shot by Russian lackeys – the morgue. Those comparing Putin to Stalin or Hitler exaggerate, but they are closer to the truth than the recent ravings of Stephen F. Cohen in The Nation – once a bastion for serious left-leaning commentary. Cohen’s argument, that Mr. Putin is merely misunderstood, is indicative of someone so enamored with contrarianism as to no longer recognize up from down, left from right or right from wrong.

Acknowledging outright thuggery need not mean the abandonment of the long-term pursuit of dialogue-driven, less-corporatist foreign policies, but it should also go without saying that there remain some utterly unreceptive to such messages. Recognizing the reality of the world is a necessary precondition for making it a better place and history is a graveyard for idealists with blurred vision. Naivety claims souls as quickly as aggression and history, bemoaning as it is, continues.

Anyone forgetting such truths now has an unfriendly reminder in Putin’s plasticine face.

In Time Magazine.
In The Economist.
In B O D Y.