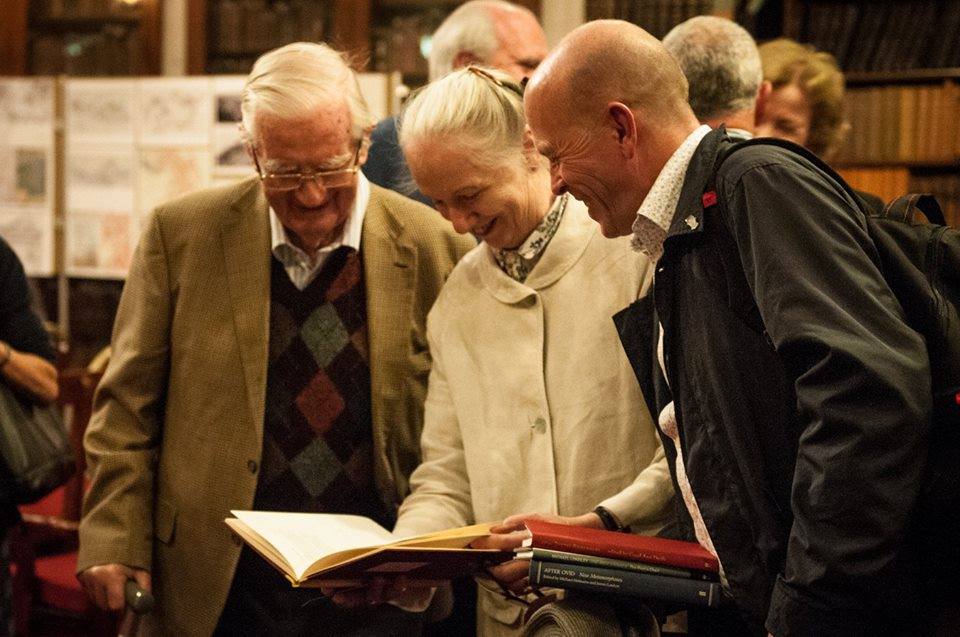 Editor’s Note: In this installment of our “Publisher’s Story” series, Andrew J. Moorhouse introduces Fine Press Poetry, which engages, and pays tribute to, some of the most outstanding poets and artists from the UK and beyond. Andrew talks about what brought him to the life-changing decision to establish the press, and the aspects of his work he enjoys most.

I have always been a keen reader. My favourite authors generally are American novelists but also British poets. A collector too. I like beautifully printed and bound signed, limited editions. I collected John Updike’s books – it was Updike who said: “a book is beautiful in its relation to the human hand, its relation to the human eye, to the human brain, and to the human spirit.” I felt the same way. After 30 years working in unsatisfying employment and, in 2012, a successful kidney transplant, I was keen to give myself a more interesting life. But where would I start?

William Ewert, a New Hampshire librarian had, as a hobby, published Updike, Ray Carver, Seamus Heaney, and others in illustrated, letterpress printed, limited editions and I wondered about following his lead.

Simon Armitage, the current UK Poet Laureate, was someone whose work I collected, though his publications had a notable lack of fine press editions. Armitage had written six water themed poems that were carved into stone along the Pennine watershed. At one of his events, and on something of a whim, I proposed a loose idea of a limited edition of the poems to him and, despite my lack of any publishing experience, he agreed to give it a go. I planned to fund the publication from redundancy money I had received.

I contacted John Grice at Evergreen Press, an excellent letterpress printer. Whilst discussing my very tentative, ill-formed notions, John suggested that wood engraver Hilary Paynter would be the right artist to illustrate the publication.

John and Hilary’s advice on the design of the book, the typeface, the choice of paper and the layout was invaluable, as was the recommendation to involve the Fine Book Bindery. In October 2013, a year after I proposed the idea, I, as publisher, had a beautiful book, In Memory of Water, in my hands. But how would I find customers?

I established a website. I went to many Armitage events and showed the publication to as many people as I could. I contacted a book dealer I knew who took some copies and whose customers subsequently came directly to me. I embraced social media. I went to Wayzgoose and Fine Press book fairs. Gradually the books started to sell. Simon offered me some poems he’d written for a TV programme and, perhaps because of its First World War theme, Considering the Poppy sold out quickly.

I realized I should work with other poets, as well. I asked Andrew Motion, who allowed me to publish Coming Home, which also featured wood engravings. I asked Irish poet Michael Longley, whose daughter Sarah has provided pen and ink illustrations for the four books I’ve now done with the Longley’s.

My usual approach is to ask poets whose work I would like to publish if they would be happy to work with me. I feel that I need to work with poets who are well established and have international reputations. If they are, then I will suggest an artist whose work will complement the text. In order to make things easier for myself I do not claim any rights to either the text or the images, and the poet and artist are free to use/sell their work in any way they wish. As I am not a poet, I perform very little editorial on the text itself, though I obviously proofread the work before its publication. I do like to be instrumental in the design of the binding of the book as this is where I feel I can express some creativity, to put my stamp on the book.

Occasionally, and because I like to vary the artistic medium, my choice of artist has created some difficulties for me in recreating the work to the required standard. This is because my technical understanding of the printing and printmaking process is still limited. The artist will usually create work in direct conversation with the text, rather than the poet, and sometimes an author will find the images unsuitable, which can cause difficulties.

The most enjoyable aspects of my venture are to receive previously unpublished poetry, to commission artwork, to visit artists (and I include my printer in that) in their studios and to learn of their approaches and techniques, and to hold the publication in my hands for the first time. I also love the thought of something I have produced finding its way from a somewhat benighted post-industrial Northern English town to far-flung places and into some of the finest libraries in the world.

I now find that poets approach me to publish their work and occasionally I have to say no. I’ve got further books planned with Seán Hewitt and wood engraver Amy Jeffs, Kathleen Jamie and stone carver Jo Sweeting, Robin Robertson with his brother Tim, who is a pen and ink artist, and David Harsent with printmaker Veta Gorner. All of the publications will prove interesting for me to do and will, I hope, put me in situations and environments unknowable to me in my previous employment as a Payroll Implementor.

I still see my publishing as a hobby (I didn’t take up paragliding or buy a Harley Davidson) and whilst some of my publications have not been successful financially, and indeed I have made substantial losses on a few of them, I do think that they have the aesthetic and literary merit to live up to Updike’s assertion.

ANDREW J. MOORHOUSE is a publisher of limited edition, letterpress printed books, and broadsides combining poetry with commissioned artwork (see Fine Press Poetry website). He started publishing in 2013, with no previous experience in the book world, after being gifted a kidney and recovering from chronic renal failure. He lives in Rochdale, North Manchester.