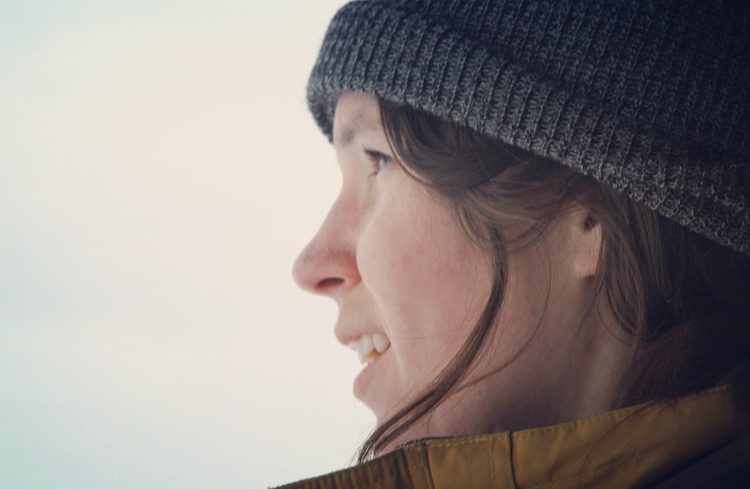 I used to cox. Hours on the water calling cadence and strokes. Guiding the boat’s body, guiding the rudder, guiding the bodies driving the boat, pressure from port, up two strokes in three, two, one. When a coxswain’s voice does not carry, they use a microphone and speaker system known as a cox box. This relies on a battery and wiring: what the body does without. Then, surgery numbed my neck, plucked at my vocal cords just far enough from recovery that my calls no longer carried down the river, caught too easily in the reeds.

Studies show lower-voiced women are considered more authoritative. I can provide nothing quantitative about my own experience except how each morning it takes a few extra minutes for the notes of my voice to warm up, to break out of cracking. On average, this equates to two cups of coffee. I wonder if this change can be measured in octaves, the depths of tone noticeably higher. When the surgeon operated, he took out a white bulb from the space between my thyroid and vocal chords. Had I let it be, I suppose I might have sprouted tulips from my throat. Not something one can hide, the red petals billowing from my tongue, leaves wedged between my molars.

Too easily influenced by years in the United States, my voice continues to warp into Americanism.

It must be the natural course of things, to ingest language and wait for it to present itself as part of the body like watermelon pips swallowed. As a child I knew that’s how babies were made. Some oracle I was. Me, with strawberry-induced hives. Me, spitting out cherries. Me, refusing to even try a pear. So many things I’ve held in my mouth since leaving my country. Guava, persimmons, words like sidewalk, cell phone and gas. Ryan says, “You sound so much more British when you’re at home.” I feel ashamed, as though I have been accused of something foreign. Then, I feel guilty for feeling ashamed. All he means is, “You pronounce your Ts with more force when your grandmother won’t stop boiling the kettle.”

Tea: another kind of intake, another leaf I put inside myself to grow.

Other wildlife that could be in my throat: frogs, toads, grasshoppers, waxy leaves that creak in the wind. Not for the first time, I’m going to announce that my body is a hedgerow. So ripe, so ready to be plucked and eaten. Not just full of amphibians and insects, but fruit. Here’s the thing with fruit, eventually its own sweetness pulls it to the ground. And, of course, there is a sweetness. The fawning looks from strangers, the comparisons to melody, the “oh I love your accent”s. Thank you, thank you, thank you. Thank you, in particular, to the elderly man who told me, “Your voice brings back so many wonderful memories. Please, say something else.”

Running errands, I practice my best undercover work. I wear a collegiate t-shirt (no, I didn’t go to Georgia Tech), I pick out zucchini (not courgette) and eggplant (not aubergine). Take a wild guess how I say tomato (everybody’s favourite rogue fruit). The opening sentence in front of new people is always the band-aid (not plaster) to rip off. “Hello” is a good place to start. At restaurants, I order water with a d-like t and a hard r. Wahder. Nobody would ever guess I was born within sight of the Thames.

When a former rowing coach demanded, “Say something stupid in that accent to cheer me up.” I refused. Because back when I used to cox, I used to row, too. I didn’t have to say a word. The eighth of eight strong women in a fibreglass shell, thick-limbed machinery breathing sharply. In my wordlessness, you might have mistaken me for an American.

My ex once said, “Talk properly. Talk like an American.” The same man whose grandfather owned a pick-your-own strawberry farm in Ponchatoula, Louisiana, the “Strawberry Capital of the World” and proudly told me about all his European ancestors. The man I met on a rowing team and used to wonder which version of me he loved, the cadence-caller or the cog. Nowadays I no longer have such questions.

I have been present during conversations about immigration and damn Mexicans, thinking about the mahogany cover on my passport, the stamps that mark me as alien, of all the permissions I needed before entering this country. Sometimes my English is camouflage, more often, a trail marker.

(I know you think this is nothing, but I’m losing my first language through the subtleties of pronunciation. Each day I’m closer to too-American sounding for England, too-English sounding for America. Even your punctuation has an accent.)

Red-faced at the gym, a woman I’d known for three months asked me where in Australia I am from. “Nowhere you’d know,” I replied.

What is this voice that must break every morning before it allows me to speak? Softened by boiling water. Tea, sometimes. Coffee, mostly. The shards of sound pomegranate-like in their multitudes, their refusal to be excised out of their skin and into the world. And yet there they are, the bright and glorious beads. So tasty, so worth the pain.

M. J. ARLETT was born in the UK, spent several years in Spain and now lives in Miami. She has an MFA from Florida International University and will begin her PhD at the University of North Texas in the fall. Her work has appeared or is forthcoming in The Boiler, Lunch Ticket, Mud Season Review, Poet Lore, Rust + Moth, Tinderbox Poetry and elsewhere.