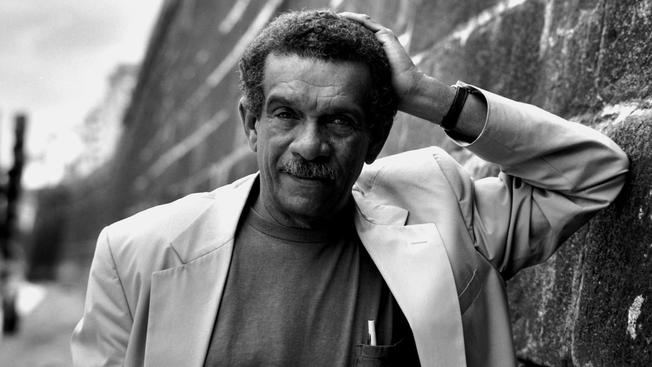 ON APRIL 8 the Consulate General of Saint Lucia in New York and the Permanent Mission of Saint Lucia to the United States will sponsor “A Celebration of Sir Derek Alton Walcott” at St. Gabriel’s Episcopal Church in Brooklyn, NY. I suspect this will be one of many remembrances of the Nobel Prize winning poet—his life and his life’s work, largely poetry, but also his plays, and his paintings. I won’t be able to attend.

My husband and I spent time with Derek at his house in St. Lucia around Christmas two years ago. We ate lunch with him and Sigrid, took a ride with them around Castries, including a stop at the square that bears his name and another stop in a gallery to meet up with his son Peter and to see the paintings by Peter that were to be featured in an exhibit the following week. “The pages of the sea,” Derek has written, “are a book left open,” and his island of St. Lucia “full of noises, / Sounds and sweet airs, that give delight and hurt not.” Back at the house we sat by the blue bay and whitecaps. Derek was quiet but seemed full of the gravity of perceptivity I first associated with him when I read The Star-Apple Kingdom. No one, I thought at the time, writes like this any more, “with all the sea’s weight and volubility,” often tenderly, but mortally aware of the sounds words make and aware of the marks made “upon the napkin of a dirty cause” given Africa, given colonialism.

Derek had signed the copy of The Star-Apple Kingdom given to us by his friend Robert Bensen, who had invited Derek to read at Hartwick College in upstate New York. Over a thirty-five year span Derek came back to the college to read from each new book of poetry but also to work with college theater students on Ghost Dance, the play that he wrote for Hartwick, and once for a show that I curated of water colors by four poets—Elizabeth Bishop, Mark Strand, Donald Justice, and Derek Walcott. During a visit in 1988 a group of us went one afternoon to see Jean-Jacques Annaud’s film The Bear, Derek pretending he loved the movie, then asking me in a whisper, didn’t I? “No,” I said. “An orphan bear cub. A savior male bear?” His body shook with laughing.

My memories of Derek are wrapped up in his books, plays, and paintings, in our handful of visits in America and the Caribbean, but also in shared experiences with other poets—an argument with Ilya Kaminsky about the relative merits of “The Schooner Flight” and Omeros; a lunch with Seamus Heaney and Derek, the two genially tossing barbs and jokes back and forth, before their extraordinary joint reading at AWP in 2013; and also a dinner following his joint reading with Joseph Brodsky back at Hartwick College. The Russian poet was monosyllabic in the company of college faculty he didn’t know. Derek noticed and stood up from his chair. He swept arms around the table, leaned toward Brodsky and said, “Joseph, these are my friends. Be nice.” To cover his chagrin, Joseph made a jest of it and barked like a dog. The rest of the evening couldn’t have been more convivial.

I knew Derek Walcott for half of my life. He wrote in Another Life that after living “half a life, / the second half is memory.” There is no return to the lived moments – not to the moment I first read the spectacular “Egypt, Tobago” nor to the moment after a television interview for public television I did with Derek and he leaned over to me and said, “You’ll get better at this.” But memories linger. The poems keep. He remains.

CAROL FROST, director of Winter with the Writers, A Festival of the Literary Arts, is the author of twelve books of poems. Entwined: Three Lyric Sequences, Honeycomb, The Queen’s Desertion, I Will Say Beauty, Love and Scorn: New and Selected Poems are her recent volumes. Her poems have appeared in four Pushcart Prize anthologies, and she has been a recipient of two National Endowment for the Arts fellowships. The Poets’ Prize and Elliston Award committees have also honored her work. Carol Frost is the Theodore Bruce and Barbara Lawrence Alfond Professor of English at Rollins College, Winter Park, Florida. She is also the interim Director of the New England College Master of Fine Arts Program in Poetry.