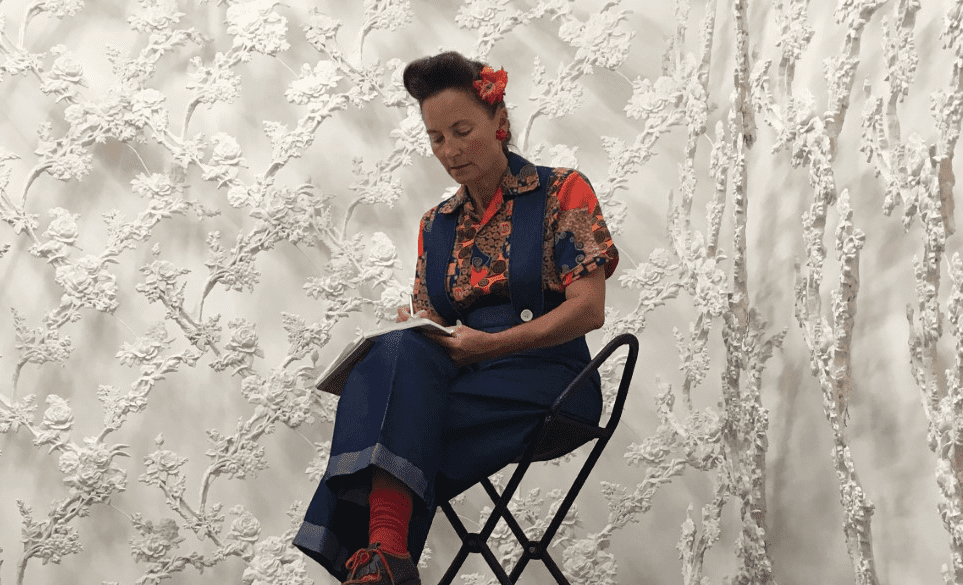 was the one I spent alone, my image taken
again and again as I leant from the window,
woken by midnight’s bells and screams. I watched

the celebrations, all the colours in the sky,
like a little war above South London. And the man
who used to own the sauna snapping away

across the street. Who was lonelier that night –
me struggling out of bed, wanting
to be a part of something, even from afar,

or the man opposite, capturing a woman,
her face flu-white and unwashed, her coral
dressing gown the only interest in the frame?

Unprepared for how bad the new year would be,
I cursed that neighbour, tried to shout
but no voice came. It’s as if the telephoto lens

deflected all my silent fuck you’s back
through the open window; so little I could change
and the new year busy defining itself.

She pulls up her jumper
and it’s hard not to look.

At first, I thought, a flesh-coloured bra
– underwired –

but the two half-moons
I’d taken as structure, were scars.

titless as she is, the female is there
no matter what’s been taken from her,

what’s been scooped away.
The scars are so much shinier

than my mum’s – who did not survive.
And this woman lives

She lifts her jumper again,
a sense of power for her in this celebration

of damage, as if passing on
trauma could somehow lessen hers.

KATRINA NAOMI’s poetry has appeared in The TLS, The Spectator and The Poetry Review, and been broadcast on Radio 4. She has been awarded Arts Council England/British Council funding to travel to Japan in 2017 to work on her third collection. Her second collection, The Way the Crocodile Taught Me, was published by Seren (2016), following the pamphlet Hooligans, (Rack Press, 2015). Katrina was writer-in-residence at the Arnolfini in 2016. Previous publications include: The Girl with the Cactus Handshake (Templar Poetry), which was shortlisted for the London New Writers Award, Charlotte Brönte’s Corset (Brönte Society), and Lunch at the Elephant and Castle (Templar Poetry), which won the Templar Poetry Pamphlet Competition. Katrina holds a PhD in creative writing from Goldsmiths (University of London), is a Hawthornden Fellow and was the first writer-in-residence at the Bronte Parsonage Museum. She has also received awards from the Royal Literary Fund and Arts Council England. She lives in Cornwall and is a freelance tutor for Arvon and the Poetry School, and mentors for the Poetry Society.