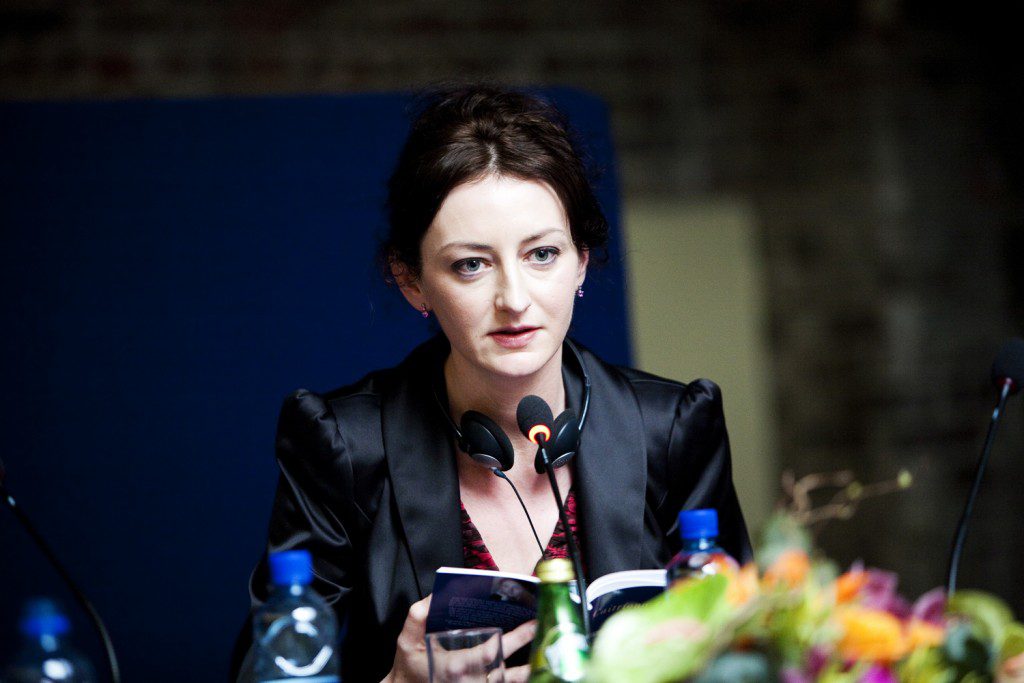 Caitríona O’Reilly’s intriguingly obscure poems offer peeks into the unspoken and wilfully ignored aspects of being. With an eye for the comically unhinged features of reality and an ear for the thrill of unexpectedly matched sounds, she attends to various kinds of taboos. Covertly proclaimed in the title of her third collection, Geis (‘prohibition’ or ‘taboo’), which she – untypically – adopts from Irish mythology, responsiveness to imposed silences has been the driving force behind O’Reilly’s verse from the start.

It is a poetry that explores the essential paradox of life; the metaphysical fact that while our existence is indeed pertinent to us, it is virtually ungraspable and eludes enquiry. This conflict is replicated in poetry and the age-old paradox (worded by Socrates in Plato’s Phaedrus) that while poems seem to impart some understanding about their subject, they respond with silence if approached with questions.

Geis brings a series of rivetingly engaged enactments of such conflicts and contradictions, in many cases pushing the limits of that necessary reticence. If she writes poems fascinated with silence and energized by the appreciation of sound – often Heaneyesque in its forceful manifestations – the two qualities find a vent in what is, in O’Reilly’s phrase, every poet’s affliction, i.e., the obsession with words.

The opening ‘Ovum’ springs from the ‘o’ section in the Oxford dictionary. Dedicated to the letter ‘o’ with its variable sound and elastic shape, it reveals the basic method of O’Reilly’s writing. Grounded in the semantic as well as aural connotations of words, the approach applies throughout the book but is especially marked here:

unless your seal the gap it’s left, they fall
out, those other o-words, like bubbles
streaming through a soapy blow-hole.

So, just as one sound or one word calls for the next, one thing inevitably leads to another and various inhibitions and prejudices related to death, religion, sex, and reproduction are brought in underhand,

from oblation and obloquy to oxlip and ozone,
and that sneaky Trojan obol,
coin-shaped, it’s true, but spawned
from the spiky Greek of obelus,
the death-mark, dagger or crucifix,
as phallic and obvious, now that you say it,
as that double o in spermatozoon,
which enters by its own locomotion –
the flagellum, its tiny whip and scourge.

While onomatopoeic playfulness is obviously the primary mode here, this is poetry performing serious work and assonance is no more relevant than mental connection. As it points to the arbitrariness of words (and by the same token thought, relationships, and fate), the opening experiment instantiates their creative potential. But it also discloses their secretiveness and ultimate incapability to give answers to particular questions.

To be forever planted on the shores of one’s seclusion, reaching out to the world and others who remain as ‘intangible as phosphor blooming on water’ is our plight and blessing, as the following sequence, ‘Island’, shows. What Geis shares with O’Reilly’s previous two collections, The Nowhere Birds (2001) and The Sea Cabinet (2006), is indeed the will to give oneself over to the infinite attractiveness of the glittering world which is almost but never quite at hand. What is new about this book, however, is the heightened awareness of the finality of things, the idea that a lifespan can be shrunk into the cold ‘dawn of our one waking’ (‘Mirror’). While it occasions moments of fright and desperation, there is also a generous share of incredible beauty and kindness.

‘Why this is hell, nor am I out of it’, exclaims Christopher Marlowe’s Mephistophilis at the head of the title sequence, reminding us that this world is as much of a hell as the one below. What immediately follows is a monologue by Virgin Mary, an ekphrastic meditation on a late-Gothic Netherlandish Madonna painting and the Marian cult. The circling narrative of ‘Our Lady of the Dry Tree’ reflects the crown-of-thorns shape of the briary branches amidst which the Mother of God hovers, and speaks of the confusion felt by the virginal recipient of the Supreme Grace but also her absolute certainty that ‘love was never here’.

. . . That is the truth
for one who feeds on shadows,
on the wafer’s feverish penumbra,
on her own breast’s blue milk.

Coupling the Virgin with a demon and then with Ourobos, the ancient and Hermetic symbol of a serpent eating its own tail, this is one of the many iconoclastic endeavours in Geis. But like in the other cases in which various religious, social, and cultural codes are dissected, the purpose is not to have them finally put away, but to relive them and thus to argue that there is no end to wonder and mystery. The result are poems which not so much break as enact the inevitable silence surrounding such traumas as colonialism, cultural despotism, institutionalized faith, drug addiction, sexual abuse, miscarriage, climacteric ‘Night Sweats’, and old age dementia.

In ‘Jonah’, the closing poem in the sequence, the prevalent mystery is that of the world itself as it turns into a devouring beast, the biblical whale. There is a sense of relief in accepting things as they are, in realizing, under the reformed Jonas’s instruction, that it is either this or nothing for, ‘Brothers, to refuse is not to live. / The world has eaten us the way the world must’. The line between resignation and surrender, however, is extremely fragile, as the adjoining poem dedicated to ‘The Winter Suicides’ reminds us. Refusing to pass judgement, O’Reilly shows how taking fate into one’s own hands is rarely an indulgence but a matter of a lost or misdirected faith and shifted interpretation:

To themselves they were least kind.
Like us, they were unable to believe

the frequencies of light concerned them.

If, despite the compassion and identification, we will never partake in the knowledge about the true causes and ends of such crises (even if they happen to be our own), it is mainly because the answers are beyond our range and grasp: ‘we ask’ and what we are given is ‘the snowdrop’s sidereal pallor’.

The question about the worth of life, its thrill and predicament is carried from one poem to the next in a sustained dialogue between various voices, personas, and selves which testify to the limited scope of our questioning but also the endless variety of the possible answers. Some of the verse in Geis pictures life as hemmed in by pettiness and senseless conventions, thus producing the sense that there is no escape; that we cannot but accept life’s inevitable direction. Elsewhere in the book, however, O’Reilly insists that the only way out of the maze is not to stop asking questions, which also amounts to keeping up faith. Here she speaks in unison with Alcatraz Island’s ‘only gardener’:

. . . The main thing
was to assure some success by trying many things
and holding onto those plants which had learned
that life is worth holding onto,
even at its bitterest. (‘The Gardener’)

The mixture of unabating curiosity and the acceptance of the fact that ‘knowledge is dust’ is a defining feature of O’Reilly’s poetry. It also accounts for her fascination with science and penchant for old technologies. The moment of mystery is fundamental in any belief, and both are indispensable to scientific inquiry and discovery. Thus O’Reilly’s interest in the scientific always applies itself to the edge of knowledge and points to the vast space beyond fact and definition. Like the starving polar bear testing the Arctic Circle in the poignant ‘Polar’, she is, in more than one sense, a ‘mage of the edge’.

‘The Antikythera Mechanism’ broods over the mysterious ancient object lifted out from the sea in the early twentieth century, a relic of an early mechanical age in the form of a proto analogue computer which was used to predict astronomical occurrences. When asked about our petty futures and muddy pasts, however, it responds, again, with ‘ever more precisely the same silence’ throwing us back to old beliefs and superstitions: ‘Consult the oracle bones, // cast the yarrow stalks.’ ‘The Airship Era’ which springs from the enigmatic image of zeppelins cruising the sky like weightless apparitions making their way ‘through the clouds, smooth as biblical fish / throwing [their] giant shadow on the sea-floor’, demonstrates how facts, especially the potentially disturbing ones, are often pushed aside and overridden by excitement and hunger for the unknown:

They did not understand, as they fell continually upwards,
how the nature of the element was the price of their rising:
the assiduous atom seeking an exit, thronging the fabric of their cells.
Witness was the privilege of the many: newsreels captured the death of a star
and – oh the humanity! – its last leisurely plummet in fire, its ashen armature.

If, on the one hand, these are poems aimed at naming the unspeakable, on the other, they are also about longing for silence. One of the finest examples is ‘Snow’ which starts with a rhetorical question: ‘What is it to talk about silence?’ The answer that the ensuing poem – and the book as a whole – offers is that it is equivalent to being in search for ‘words for what I felt’ when touched by it. As it happens, there prove to be many such words as snow with its countless tiny feet noiselessly overwhelms the speaker ‘with its meaning, // its vast multitudinous silence, / again and again.’ The apparent homogeneity of snow is countered with the infinite diversity of individual snowflakes until, in a typical move of zooming in on the detail, the muffling blanket reveals itself as an intricately woven structure with myriads of nameable facets. Thus things become words, and words become things: ‘Motes, corpuscles, animalcules’. But what is more, in this moment of lexical spree silence becomes associated not only with concepts but with sound. Just as there are many shades to the seemingly monochrome mass of snow, there is not one, but many silences that prove to be audible as various levels of noise (or habitual thinking) are peeled off. The fundamental role of silence indeed is to reveal that there is no such thing as silence.

The key issue in O’Reilly’s poems is that silence does not necessarily entail the lack of sound or notional vacuum. As they comment on the necessary scantiness of language and communication in the face of the immense variedness of experience, these brilliant structures always contain mechanisms to undermine and rebuild themselves. It is pointless, she keeps telling us, to ask poems questions and expect them to explain themselves since they do not require an ‘understanding’. In her insistence on silence as part of poetry’s effect and purpose, O’Reilly seems to propound that it is only as we acknowledge the elemental muteness and volatility of art (and reality) that we may be able to hear what poems, or the world, want to tell us.

DANIELA THEINOVÁ is a critic and translator. She has translated from both English and Irish into Czech, including novels by Colm Tóibín, Kate Atkinson, and Marilynne Robinson, and poetry by Vona Groarke, Alice Oswald, Máirtín Ó Direáin, and Nuala Ní Dhomhnaill. Her articles have appeared, for example, in Post-Ireland? Essays on Contemporary Irish Poetry and various Czech literary journals.