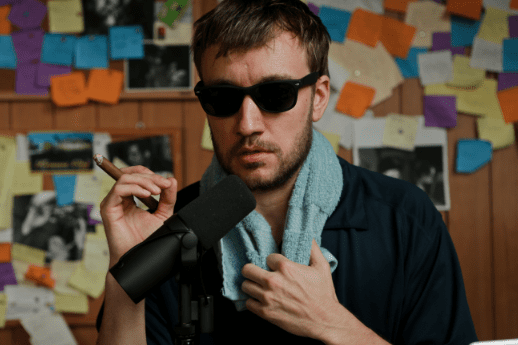 an excerpt from
THE HOLLER SESSIONS

In performance there are always variations on much of what is written here. This script was formatted to reflect the improvisational nature of The Holler Sessions.

Everything takes place in Ray’s small and shoddy radio studio. The walls are covered with post-it notes, pictures and newspaper clippings. There is a coffee maker, file cabinets, boxes, and stacks of books about jazz. There is an empty flowerpot in the corner. The floor has peanut shells and coffee stains on it. There is a desk with a mic, a laptop, a mixer and a cell phone plugged into the mixer. All sound is run from onstage.

he moans several times into the microphone

Moanin’!
Art Blakey and the Jazz Messengers
this is an all-timer
I don’t know how long this has been on

that’s a tough one
that’s a tough one to start with
that’s true folks
true true true
Coltrane said that
let’s try an easier one here we go
true or false
“I realized by using the high notes of the chords as a melodic line, and by the right harmonic progression, I could play what I heard inside me. That’s when I was born.”
true or false?
lines are open
come on folks you can do this

we got one yes caller you’re on the air

bonus follow-up question: who said that?

improvised hints
the answer is Charlie Parker
call is wrapped up

hey I know let’s listen to some Bird
you know at the end of Bird Gets the Worm when they’re trading eights or whatever?
I love that
where is that
here we go listen to this

music
oh really?
music
huh
music
which reminds me
music
I hadn’t thought of that
music
and piggybacking on that
music
interesting!
song finishes
oh how I love intelligent conversation
that’s Bird Miles Davis Tommy Potter Duke Jordan and Max Roach on drums
that’s like Thomas Jefferson Abe Lincoln Roosevelt and
uh
two other ones having a conversation only these guys can implement in real time
“We collectively create a thing of beauty”
Max Roach said that
listening folks
he’s talking about listening
listening
listening
listening
listening listening is like helping somebody shit into a bag
Ray hits the BLEEP button
and by helping I mean you’re holding the bag
ok let’s unpack that
say you’re in the army and they sent your ass over there and you’re in the desert and you’re on your platoon’s scout team and you get some intel about a particular location where there might be some whathaveyou and so six or seven or eight or nine of you pack up your gear and you sneak out in the desert in the middle of the night and you get within like a half mile of this particular location and then you dig a hole in the ground and then you all get into the hole and you stay there for like two weeks and you perform surveillance on this particular location
now whilst in the hole you can do your best to time your bowel movements for nighttime hours when it’s safer to venture out of the hole you’re protected by the cover of night but it’s not always gonna be up to you so let’s say it’s 2pm on day six in the hole and all of the sudden you gotta go
now the army has provided for such contingencies by issuing everybody these lovely sealable pooping bags
now the logistics of using the bag are rather complicated
the bags are small and you know you’re in a hole in the ground it’s dark
there are no railings or geriatric pooping chairs you got all your gear on you barely even have enough room in there to pull your pants down let alone position this little bag properly
so the Army in its infinite wisdom has determined that the thing to do is to have a comrade hold the bag for you
now as bag holder the stakes are pretty fuckin high
if you don’t receive
if there’s a breakdown in this communication
it’s gonna be a long day in that hole depending on the nature of the shit your colleague just took
now are you ready for the bridge?
are you ready for the bridge?
that’s what it means to listen!
the stakes are that high
it’s that active
and that’s what these guys do
the real ones
when it’s really happening
so if you’re with me
take out your metaphorical army turd bag
open it up
and let’s listen some music
Charlie Parker
Koko

so everybody’s better than me ok
but I went to venue recently
they booked a college band
and look nothing against college
or white kids for that matter because they were all of em and their teacher who was at the table in front with his merlot and his lean and they were playing his compositions and he was very satisfied and it was very safe
and I’m not saying they should have been addicted to heroin or that they can’t be white or that it has to be 1950 something
I don’t know exactly what I’m saying
but I know how it felt and these kids they weren’t ready
they had nothing to say
why are you playing?
they were little babies
they were all gums and fuzz
and look I would never tell some white kid they shouldn’t play jazz or go to some fancy jazz college any more than I would tell some black kid that they should
of course not
of course not
but when you don’t feel it you gotta talk about that and so I’m saying these kids were not ready
and they didn’t know it
because nobody told them
when Charlie Parker wasn’t ready he got a cymbal thrown at his head
true story
these college kids aren’t ready and they get applause
and a drink ticket
and a degree
that’s happening right now
and look I don’t play shit ok
DING BLEEP
so they’re all better than me
I know this
so I’m watching this college band and the tenor player is wearing shorts and his knees are all scabby and he’s not ready and I’m dyin
and then boom all of the sudden I start thinking about Bird
my god how incredible was Bird at the same age as this kid
younger even
by the time he was like 17 Bird had already been married divorced quit school car accident morphine addiction and he’d toured a few years with Jay McShann
and I realize that I am experiencing indirectly the greatness of Charlie Parker via this kid’s scabby fuckin knees
BLEEP
so now I say thank you college boy well worth the $5 cover
see it all folks
the good the bad and the scabby knees

THE HOLLER SESSIONS
written and performed by Frank Boyd
premiers at On the Boards, in Seattle.
Jan 8-18, 2015.

FRANK BOYD is a theater artist based in Seattle. As a member of the NYC ensembles Elevator Repair Service and the TEAM, he performed in Gatz, The Select (The Sun Also Rises), Architecting, and Particularly In the Heartland. Frank recently appeared in the world premieres of The Amazing Adventures of Kavalier and Clay with Seattle’s Book-It Repertory Theater (Gregory Award nomination) and Red Speedo by Lucas Hnath at the Studio Theatre in Washington DC. Frank appears in the 2014 independent film Almost Family, and he wrote and starred in the 2012 short film B.U.S.T. (Special Jury Prize Dallas, International Film Festival). Frank went to NYU and is from East Lansing, MI.