THE POEM: Jacek Gutorow on John Ashbery’s “The One Thing That Can Save America” 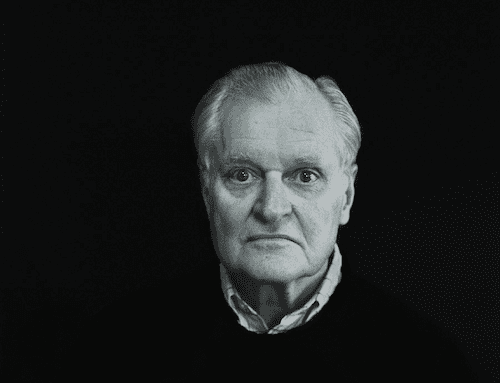 Some time ago, I interpreted Ashbery’s “The One Thing That Can Save America” with some of my students who had been finishing a course on Contemporary Theory. It turned out, as I’d predicted it would, that good poetry, unlike theory, stays in the mind. They forgot names and titles of important studies but they kept returning to the poem even if, they said, they didn’t understand it. For one thing, it helped them understand why poetry matters. It doesn’t have to include deep insights or truths. It may be completely pointless. But it works on your mind in some mysterious ways. And it sticks.

I told the students to form three small groups and asked to analyze the poem in the framework of this or that critical theory. Additionally, I asked them to think about an answer to the question included in the title. What is the one thing that can save America? Frankly speaking, they were somewhat alarmed by what they very quickly called the poem’s density and inscrutability. They were also slightly suspicious of my intentions. Indeed, what is it that can save America today?

The first team began with a structuralist interpretation. “The One Thing” (they tentatively argued) might be described as founded, both rhetorically and thematically, upon binary oppositions. For example, we have in the poem actual places and place names that are arbitrary and have nothing to do with places. We have a lot of light (“unfamiliar light,” “girders of light,” “a star”) as opposed to darkness (“scenery mingled with darkness,” “downtown shadow,” “shady streets”). There are urban images versus rural ones, and there are fenced areas versus open country. Private meditations clash with public concerns just as an individual voice counters the voice of a community. We have also a very interesting contrast of the present and the future. There is a crucial distinction between the central and the peripheral (the poem’s main preoccupation seems to be articulated in its opening lines: “Is anything central?”). Finally, we can discover something like a contradiction between the complexity of the rhetorical argument and a perceptible desire to make things clear. The poem proves its greatness because the contraries do not match and fit into any whole; rather, they are suspended in casual balances. The message, if there is any, is negotiated (to use this over-used critical password) in a never-ending play of foreground and background, solution and dissolution, unity and fragments, and the poem takes on its meaning somewhere in between.

The second team came up with a more or less deconstructive reading which was based on this fragment:

All the rest is waiting
For a letter that never arrives,
Day after day, the exasperation
Until finally you have ripped it open not knowing what it is,
The two envelope halves lying on a plate.
The message was wise, and seemingly
Dictated a long time ago, but its time has still
Not arrived

Looked at from the perspective of these words, the poem turns out to be a manifestation of its own impossibility. The message cannot get through to the reader and it disseminates into unrelated images. We are in the position of a switchboard operator who connects telephone calls and is like a telephone himself (or herself) – empty and impersonal but at the same time open to other voices and making them resonant. The same applies to both the poem and the poet. These are just links in the network of texts, fragments and messages. A kind of automatic answer machine is evoked here, something like “please leave a message, thank you.” The ultimate meaning cannot be grasped. A letter never arrives and so the poem is like ups and downs in a never-ending and aimless journey around itself. But (my students stressed) this makes sense because the dead-letter-office situation reflects the poet’s own mood at the moment of writing and maybe the reader’s mood as well. Aren’t we sometimes empty and impersonal, letting things and words pass through us?

The third party suggested a sociological interpretation. It is possible, they argued, to see the narrator of the poem as a citizen – Citizen Ashbery, as it were – who realizes his dependence on the society he lives in, and at the same time tries to resist it and articulate his private independence. He would be one of those “[b]arely tolerated, living on the margin/ In our technological society,” as the speaker of one of Ashbery’s earlier poems says. “The One Thing” is definitely a poem about “civil obscurity,” about attempts to elude the political (ideological, economic) dimensions and demands of the contemporary society. Importantly, this imperative takes on a plural form: “our fate can be exemplary.” David Lehman might be right when (in his 1998 The Last Avant-Garde. The Making of the New York School of Poets) he calls the poem “a political one… in some attenuated sense.” It is political in the sense of sabotaging the public sphere and its discourses. It may be noted that Ashbery often employs political and ideological jargons, revealing their limitations and stressing the moments when they stop making sense. The poem’s sociological perspective is included in its unwillingness to sustain the language of the public, which in itself is a manifestation of resistance against something Louis Althusser would call an “ideological state apparatus” (the latter is here understood very broadly, not so much as a political resistance, but rather a disagreement to place poetry in any civil, communal and collective contexts).

So how do you like it, I asked my students after we have got through their close readings of Ashbery’s meandering meditation. They reacted in two ways. On one hand, they were glad that the poem may be read in a relatively detailed way and from different perspectives so that they got deeper and deeper into its intricacies and ambiguities. On the other hand, they were not wholly satisfied with splitting theoretical hair. It seemed to them – and to me – that critical paraphrases were not only partial and limited (as they highlighted only chosen fragments of the poem) but indeed did not grow up to the overall effect the poem exerted on its readers. Even at their best, such expositions dramatically narrowed down and distorted our expectations and impressions. And they didn’t give justice to the breathtaking beauty of particular images, metaphors and lines. Try to show the mechanism of the poem and its essential quality just disappears.

One might conclude then that theoretical approach is wrong from the start. But, I remarked, such a conclusion is theoretical, too. And it casts its shadow on the poem. Look at the poem’s thirteenth line: “The juice is elsewhere.” The word “juice” reads almost like “gist” and the poem indeed seems to say that the juice/gist of the poem’s matter is missing – you have to try and look for it again. Isn’t it an invitation to re-read the poem many times, letting it modulate its senses according to the reader’s disposition, mood, weather, or the present political situation? Each reading is different and it helps the poem become a round character (to refer to E.M. Forster’s helpful phrase) – it is the “lumps and trials” that the reader has to face, and this makes the poem a bit autobiographical. Ashbery referred once to one of his poems as “everybody’s autobiography.” I think this description fits in to “The One Thing” as well. During subsequent readings we learn more and more about ourselves, our ways of seeing and modes of thinking, our hopes and prejudices, our repressed dreams and terrors.

Moving on to the second question I proposed: what is the one thing that can save America? Definitely, it is not a thing that can be found and grasped or a message to be sent and read. It is more of a process that we can enjoy in all its inconclusiveness. It would be best to say that the poem reflects the poet’s mistrust of received ideas and styles. It unfolds as resistance against particular readings, not least against particular theories and critical perspectives. This was a general impression we had after all – although the poem may be analyzed from different positions, these are paths that the poem as a whole avoids. Maybe the one thing that can save America is its resistance to what has been settled and determined? You have to renew your efforts and start again, the poet seems to say. No theory will do. Resistance might.

JACEK GUTOROW is a Polish poet, translator, and literary critic. He has published five books of poems and is the recipient of a Ludwik Fryde Award from the International Association of Literary Critics. His translations into Polish include books by Simon Armitage, Wallace Stevens and Ron Padgett, as well as work by Henry James, John Ashbery, Charles Tomlinson and Mark Ford. He lives in Opole, Poland.

Four poems in B O D Y
Poem at Poets.org
Poem in Guernica