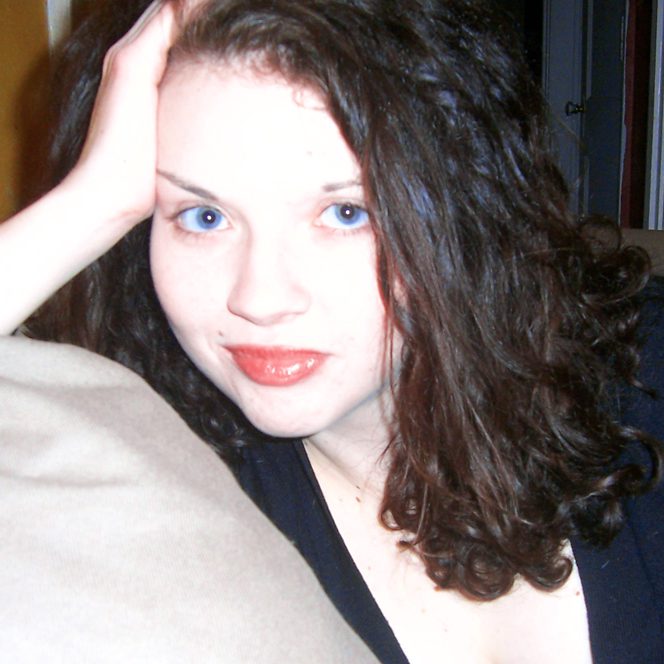 HOW SOME DEBUTANTE BALLS END

When Lorla’s mother drove her BMW through their living room, a call was made to her grandfather’s office in Lexington. The police knew Grampa, so they took notes, then went away. Her mother would go back to detox; last time, she came back with leather burns on her wrists and ankles from where they’d tied her up.

“We called Bingham Farms,” the social worker said, and she spat on the floor from her stretcher and started to cry.

A long Oldsmobile Cutlass pulled up. A man in a suit and a Dick Van Dyke hat stepped out. He removed the hat, bent slightly. Said, “Are you Lorla?”

“I am Stanley Dornbush. I work for your grandfather.”

Matthew was sniffling. He’d peed himself when the car crashed through the wall. Lorla had grabbed Jacob in time to avoid being hit by a cinderblock. She was surprised she hadn’t peed herself, too.

“Are these your brothers? Names and ages, please?”

Lorla rubbed her ears to get the ringing out. “Matthew’s five. Jacob’s three.”

“That’s fine. I’m wondering if you can assist me.”

Yellow caution tape wrapped around their front yard and tarps covered the hole in the living room wall. Drywall dust powdered the couch. Her mother had long ago sold the nice stuff from her grandparents: the Faberge egg, a real ruby necklace. She did not go to pawn shops, but to appraisers with offices in Victorian mansions downtown, where she could get more money. Even when she was very sick, Mom remembered her manners, knew how to wear a nice suit and make people nervous in the way rich people do. In selling these things, she’d avoided selling their car.

Dornbush said, “Do you have a change of clothes?”

“I see. Is there a Laundromat nearby?”

He drove them to Dottie’s Do-Em-Up. A very large woman in a bathrobe stared as Dornbush folded shirts. Dottie fanned herself when she returned from lunch at Burger Queen. Squawked, “Baby, you handsome.”

“Thank you kindly,” Dornbush said, civil, and shamed Dottie back into her office.

Lorla stood next to Dornbush rolling socks. She still heard high wind in her ears, the crunch of bumper through the wall, the engine turning. Her hands shook.

“She taught you well.”

Back at the duplex, the landlord Mr. Nickel was on the front stoop. He ran at them when he saw Lorla. “The fuck happened here? Where’s your mother? I get a call from the fuckin cops telling me the house is trashed-”

Dornbush said, “Stay here, please.” Climbed out, put one hand in front of him, pocketed the other. Spoke.

Dornbush opened Lorla’s door. “Thank you for your patience.”

Inside he said, “I need to make arrangements for when we leave. Could you direct me to your telephone?”

Lorla pointed to the kitchen.

They watched Designing Women while Stanley Dornbush phoned someone on the rotary. Lorla poked her head in and saw him making notes in a small leather journal. He said, “Yes sir.” Saw her and smiled faintly, nodding.

He hung up. Knelt down, looking Lorla in the eye. “Can you tell me if your mother had any hiding places? Where she would put things she didn’t want you or your brothers getting into. A closet, or a drawer?”

Lorla led him down the dark hallway to her mother’s bedroom. They opened the door and smelled sour and mildew. Dornbush stepped around clothing, soda spills, ashtrays. Lorla went to the closet, swept the dresses aside, toed through a high heel pile. Pointed to a crate.

“There’s a wooden box at the bottom.”

Dornbush lifted things out and placed them on the bed- Jacob’s baby shoes, birth
certificates (these he tucked into his jacket pocket), a box of pictures: Nana and Grampa in evening wear at New Years parties, her mother by the country club pool, in white gloves at her coming-out party when she was seventeen.

He opened the box it, peered inside, shut it. “Anywhere else?”

He combed through each drawer slowly. Lorla watched. “How old’s Grampa?” she asked him.

He saw something that made him stop. Drew out a King Leo’s peppermint tin.

“Have you known him a long time?”

“I do whatever needs doing. Lots of things.” He closed the dresser. “Could you kindly direct me to your washroom?”

They walked back, looking at her brothers pale and silence in front of the TV. A laugh track shrilled. Lorla flicked on the light. A centipede gyrated up the shower wall. Stubble and ash darkened the sink. Dornbush ripped free a square of toilet paper and used it to lift the commode seat. Opened the boxes, produced two baggies of white powder. Turned his head, shook both empty, closed the lid, flushed. Strode to the kitchen, put the baggies in the trash, tied off the Hefty.

Lorla snapped off the TV. “Where are we going?” Matthew said.

“Are we coming back?”

Dornbush took them to Druthers. They nibbled French fries and watched him eat a burger in three neat bites, then wipe his hands on a yellow napkin. They crossed the state line at dusk.

“Are we going to live with Nana and Grampa for good?” she asked him.

“You will live with them awhile.”

“If I had the answer, I would surely tell you.”

Lorla considered this. “No one else talks to me like you.”

“I have no children. Is there a way you are supposed to talk to children that is different from how you speak to adults?”

“Your mother is an addict,” Dornbush said. “She has a drug problem. She’s sick.”

Lorla felt something hot unravel in her stomach.

“Your grandfather has spent the same amount of money he spent on two thoroughbreds that won the Kentucky Derby sending your mother to hospitals. He is a good man. He wants you and your brothers to be safe.”

Lorla looked down at her hands. She heard the rush in her ears. Her throat tightened.

An interstate exit put them on a skinny two-lane road. Lorla saw pastures and hills in the dark. She watched her brothers sleep, then faced front in time to see a pair of liquid eyes widen in the headlights, four slender legs dance, a scream. Then a thump, the windshield cracking, Dornbush twisting the steering wheel. The car jerked to a stop in a ditch.

Lorla’s teeth snapped down on her tongue. Her mouth filled with blood. Dornbush cut the engine. “You all right?”

He walked around and leaned over the boys, touching each on the shoulder. A long, slender head rose from the ditch. It moaned.

Dornbush lifted a rifle from the trunk. Took aim. There was a crack. The head dropped.

They drove slowly until they reached a high gate. He cranked the window, pressed a button on a speaker. The gates opened to a large house in the distance.

An old man in a suit climbed down the porch stairs and approached the car, their mother’s face an echo in his. And as he looked his grandfather in the face for the first time, Jacob straightened and sighed and a thick worm of blood emerged from his nose.

KAYLA RAE WHITAKER is originally from Eastern Kentucky and has an MFA in fiction from New York University. Her work has appeared or is forthcoming in Smokelong Quarterly, Joyland, Bodega, Burnt Bridge, and Still. She recently appeared alongside such luminaries as Lynyrd Skynyrd in the History Channel’s southern culture documentary “You Don’t Know Dixie.” She is currently at work on a novel about raging lady cartoonists. You can also find her on Twitter @kaylarwhitaker.

A story in Bodega magazine
Another story in Joyland