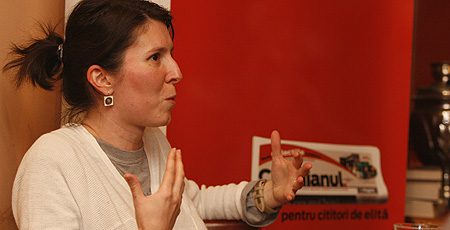 Obsessive love and the desire for freedom is portrayed through the lives of two adolescent children and two adults in Sun Alley, the second novel by one of Romania’s finest contemporary authors, Cecilia Ştefănescu.

Sal, a twelve year-old boy, on his way to visit his first love, Emi, seeks refuge from a torrential summer rain storm in a nearby block of flats. Curious to find out what the stench emanating from the block’s basement is, Sal ventures in search of its source, which turns out to be a woman’s corpse. In a shocking move, Sal severs one of the woman’s fingers, upon which is a black stone ring. The finger is the only evidence the corpse actually exists when Sal later makes Emi swear an oath before he shows it to her. Emi, with moderate curiosity, caresses the lacquered fingernail and keeps the ring. She doesn’t believe Sal’s story. In Emi’s eyes, Sal is “an awful liar” like the other boys she sees him with.

While the beginning of the story may sound macabre, Ştefănescu’s main focus is the question of what we are prepared to do for love, whether as children or adults.

The children’s love is full of doubt. To Emi, love is “a long suffering, an unceasing array of anxieties, followed by a slow death.” Sal’s parents don’t like Emi — because of her domestic circumstances — her father left her mother a year before and they consider her mother embittered. But Sal is taken by the “girl’s wilderness” which he finds so irresistible. He says: “Emi, my beloved, when I think of you I get dizzy.” But Sal has already learned how to lie about his intense feelings to his parents and friends, and even to Emi: “Love had to be concealed, never confessed, just lived. The aspiration for love was the only thing that really kept you at the surface – not even the aspiration for fulfilment, but the kind that is unaware of itself, like smelling out prey in the air.”

The game of love the children play with each other is a fascinating one. Their first sexual exploration is abruptly interrupted by Sal’s mother but, ultimately, the children are more afraid of losing their innocent feelings towards one other than their parents’ reaction.

At this point, Sal and Emi encounter a couple of strangers sitting on a bench by the lake where the children come to play, a man and a woman, who become mirror images to the children’s secret relationship and half-lies. Sal and Emi wonder if the couple are also lovers like them. “They seem to be afraid, like people who love each other, but they can’t show it. Don’t you think so?” The novel’s second part then shifts its focus to this married couple, Sorin and Emilia, who are having an affair.

There is a chilling sense of a secret waiting to unfold: One that links the children hiding their infatuation from their parents and the adults in their extramarital relationship.

In Ştefănescu’s highly acclaimed first novel – Love Sick (2004), set in the post-Ceauşescu era, a young woman accidentally falls in love with another woman and lives in denial to the extent that she distorts her own reality in order to be happy. It is this psychologically unbalanced behaviour, in which characters begin to alter reality and to twist events to their own perception, that the author further explores in Sun Alley. Here, though, it is adulterous love rather than homosexual.

Sun Alley is a splendidly subtle piece of writing dissecting various forms of manipulations the characters resort to in order to preserve their relationships, whether as children or adults. Alongside their calculated behaviour – the descriptions of Sorin’s readiness to sacrifice his twin daughters and wife in order to spend more time with his lover is terrifying – there is, on the other hand, a surprising tenderness and understanding towards their families. Sorin, for example, can’t help but acknowledge his children’s need for independence from their parents’ control, as much as he craves the freedom to love another woman.

And he remembered perfectly well that grown-up people’s words couldn’t stop the minds of children from running about and devising means of escape. He decided that he would allow them to do everything they wished, accept the consequences and change according to the suffering they would put themselves through. They had become what they were dreaming of. They had to become their own dreams. Just as he had become, just as she herself had…

Sun Alley is a complex and absorbing novel, beautifully translated in lyrical English. Ştefănescu’s constellation of characters show us different and conflicting aspects of what is, perhaps, the most intense of human experiences: falling in love.

When I asked Cecilia Ştefănescu how significant love is in her writings, she responded: “Writing about love is as important as writing about myself, about my fears and expectations. I think all of us, at some levels, lead our lives wondering what our purpose is and fearing about our end. We need to be loved and fear we might not be.”