THE STORY: Ken Nash On Isaac Bashevis Singer’s “The Spinoza of Market Street” 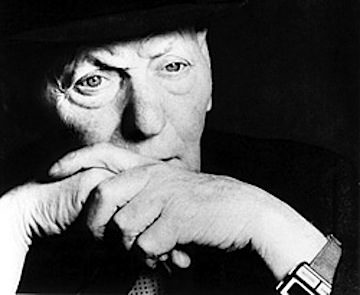 “The Spinoza of Market Street” is the tale of Dr. Nathan Fishelson, a very old man living in the Warsaw shtetl during the days leading up to Word War I. Dr. Fishelson had studied Spinoza’s Ethics for thirty years and was endlessly writing a commentary on its propositions, proofs and corollaries.

Outside his garret window, down below, is the noisy, garish Market Street filled with peddlers, prostitutes, merchants and thieves. He observes them with disdain then retreats back to the more orderly world of Spinoza’s logic and reason.

I read this story, while sitting in the Bombardier Cafe in Chicago’s Wicker Park. I was a regular and the waitress never needed to ask before refilling my coffee mug. I had been working as a copywriter and my switch from full employment to freelancing wasn’t going so well. I was good at the writing, just not so hot at hustling to find work. I was contemplating either going back to agency life, returning to school for an MFA, or cashing out my 401K and spending a year in Barcelona, a city I enjoyed visiting after graduating college. In Barcelona I could maybe teach English part time and use the rest of my time to write and figure out what to do with my life.

I was completely stuck at this crossroad, unable to choose a direction. I had never had this problem before. I was always forward looking, decisive and ambitious. But now whenever I tabulated the pros and cons of each option in my notebook I could come up with no clear winner.

I don’t remember why I had picked up The Spinoza of Market Street and other Stories. Either someone had recommended Singer’s stories to me, or I had been recently reading something about Spinoza. At the time, I was only generally aware of Spinoza’s deterministic philosophy. To be honest, at that time I was just getting over a bad case of libertarianism which I had caught from a talk show host after graduating high school. Libertarianism seemed like a logical, coherent system of thought for someone (male) who grew up in the suburbs (white, middle-class). And it had been my first real exposure to any sort of philosophy.

Following the Objectivist dictates, I had gone for quite some time trying not to let my emotions too unduly influence my decision making. But at this moment, instead of Reason leading me forward, it had backed me into a dark alley, rifled through my pockets and walked away with a shrug.

“The Spinoza of Market Street” offered me a lit doorway in a dark passage. At the end of Singer’s tale, Dr. Fishelson is cared for by his neighbor, a homely and much younger spinster. She nurses him back to health from near death. While doing so, she is shown more gratitude and attention than she has ever experienced in her misfortunate life. She presses upon Dr. Fishelson to marry her. He complies though doesn’t seem to completely understand what is happening to him – at least not until their wedding night, when she transforms him with a kiss, whispering “Dear husband…”

A short time after reading this story I had a dream. I was running through some foreign city. The narrow streets twisted and turned into and over one another. Small stoned bridges spanned narrow canals. People crowded through narrow passages past street vendors grilling meats and stirring blackened kettles. I was completely disoriented. It was as if I were scrambling to find my way through an M. C. Esher drawing.

When I awoke, I knew that city had been Prague. I don’t know why Prague. I knew very little about the place. But I thought that whatever I was searching for must be there. And if not, what did it matter? It was a leap outside of logic. And a way forward.

At the end of Singer’s tale, Dr. Fishelson is looking up into the night sky as he’d done many times, the stars traveling their fixed paths through unbounded space, planets and moons endlessly orbiting. Nothing had really changed. And yet everything had changed. He was looking at them not as Dr. Fishelson, the Spinoza of Market Street, but as Dr. Fishelson, a man restored by the absurd, unreasonableness of love. “Divine Spinoza,” he says to himself, “forgive me. I have become a fool.”

I didn’t gain a personal philosophy from reading Singer’s story. Whether all is orderly or all is chaos; all predetermined or all chance – that isn’t the point. What Singer showed me was that a story – not a great philosophy, but a simple story – could challenge ideas by shifting our perspective and creating new context. A story does more than teach us what to think, it shows us a way of thinking. Truth may always be elusive, but the path toward truth is not. It is always open to us. Sometimes we just need a shift in perspective to find the way forward.

At the end of summer, I sold much of my furniture and stored the rest of my belongings with friends and neighbors. After boarding my Czech Air flight to Prague, I plugged my headphones into the armrest and listened to accordion music as we took off. I wasn’t sure what I would find in Prague. But it didn’t matter. My plan was to live life as a process, like a story unfolding beneath me, rather than something that had to be attained and mastered. In other words, I learned to be a fool.

KEN NASH is the founder of the Alchemy reading & performance series in Prague. His short fiction has appeared in The Prague Revue, Bordercrossing-Berlin and X-24. His first collection of short stories, The Brain Harvest (& Other Autobiographical Fictions) was published by Equus Press in 2012.