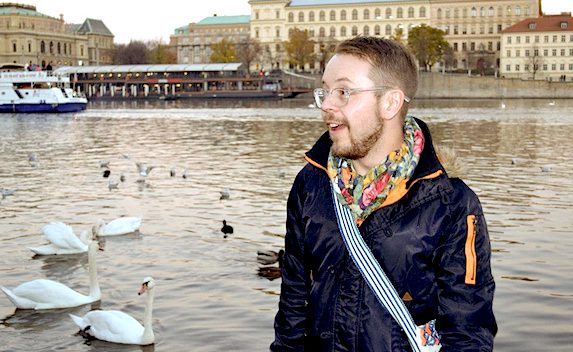 split by two states, Tennessee and Virginia,
in the way we are both split: fan and fanatic,
words of the same Latin root, dogmatic
devotion, excessive enthusiasm. Lust.

But I get it. Your pleas are earnest.
Your mascara runs, your voice cracks,
sincere. She’s a human!, you scream,
knowing so well this world is not just

to those of us who love it the most,
the queers and the divas—least of these.

I met Benjamin in hot July outside
the yogurt shop on Forbes.

We walked and in front of his building,
he asked, Come up.

I knew this, no question,
and we kissed, pulled t-shirts over

our jeans down and stepped
into the world.

We fell to the bed, salted
nipples and chests and obliques

with the rough of our tongues.
Our bodies glided

in the heat,
sweat everywhere, beginning

to finish. After, he slept. I thumbed
his necklace, Star of David,

whispered, How far we fall from grace.
How far we do not fall.

D. GILSON holds an MFA from Chatham University and is a PhD student in American Literature & Culture at The George Washington University. His chapbook, Catch & Release, won the 2011 Robin Becker Prize and his new chapbook, Brit Lit, is forthcoming from Sibling Rivalry. He has also won the Larry Neal Award for poetry and his work can be found in The Indiana Review, Assaracus, The Rumpus, and elsewhere. Find him at dgilson.com.