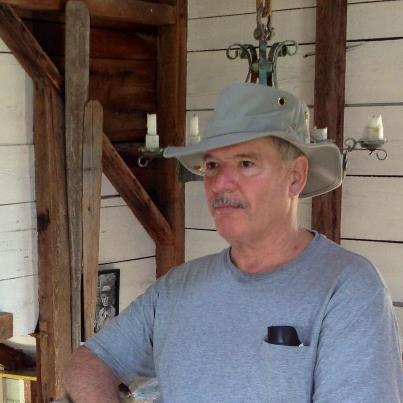 Despite the risk, which is small
for the seldom photographed,
I treasure quasi-unprotected
passages from limo doors
to the doors of older buildings.
One day on such a sidewalk I’m approached
by a ragged malodorous fanatic
who, in the instant before he’s blocked,
cries, Jesus died for you.
All afternoon, at meetings,
in the presence of lawyers
who smile as I sign things,
at the club, and at dinner,
thoughts of that encounter
return. That night
I gaze at the lights of the city below.
They extend in my mind
beyond the horizon to the towns
that huddle around wire fences
protecting kids from vacant factories.
I imagine the people,
some bravely not drinking
nor abusing each other in those towns,
and bless them in my heart; but am drawn
on by the lights to other places
where I have or sold an interest:
the little cities, with their touching new
museums of something-or-other,
austere parks, people gamely
still sending out resumes and standing in line.
Then the prairies, the box stores, the prisons, the farms …
In a kind of rapture, I see
the mountains and lingering day out there;
the deserts thirsty ambition crosses;
the incomparable
roads along which sleepless drivers,
skirting my former maquiladoras
(now themselves elegiac, outdated),
bestow on the heartland
their loads of methamphetamine. Everywhere
there is striving, everywhere people
I bless in my heart, as I think I’ve
already stated. Everyone dies for me.

It’s 1938. The new fighters
test well, steel plants
are in hand, Austria in hand,
Prague on notice, and the Reichsmarschall
in a white uniform lounges
on the deck of the Carin II.
(The aide who threads the canals
reports to Himmler, but learns nothing this trip.)
Loudspeakers blare pop songs –
“Blame It On Napoleon!” –
to the smiling waving people on the banks,
and Goering under his awning grins and waves.
Then he orders the aide to sail
up the coast to Helsingør.
Whimsically, he doesn’t radio
the Danes till almost within sight
of the castle. But this visit was planned,
and that evening the actor, Gründgens, is not surprised
to see his patron in the audience.
The curtain rises. Hamlet is alone.
There’s no ghost. Claudius looks Jewish.
The scene of him praying turns one’s stomach
with its hypocrisy and insolence!
He has corrupted Gertrude’s blood.
Polonius is an old-style reactionary.
Ophelia is febrile, flighty,
racially mixed. The prince is strong, direct,
Aryan. His flaw is to think
that any of these people means something.
They twist him. He should have seized power
when his father died, followed his healthy instinct.
The blond giant Fortinbras succeeds to the crown.

In the dressing-room later, Goering
will again applaud
his protégé Gustav Gründgens,
Intendant of the Prussian State Theater,
not a Party member,
homosexual twice hidden in marriage;
he will call him the Hamlet of our age.
And tomorrow the King of Denmark
will pin, as a sort of bribe,
another medal on the uniform.
But tonight the big man
enjoys, in the undifferentiating
manner morphine entails, the fights
and speeches, the great talent
he owns like a painting, the report on the Stuka,
obsequious looks, and the high whitewashed vaults
of this castle, Hamlet’s castle, where
the original story, whatever it was, happened.