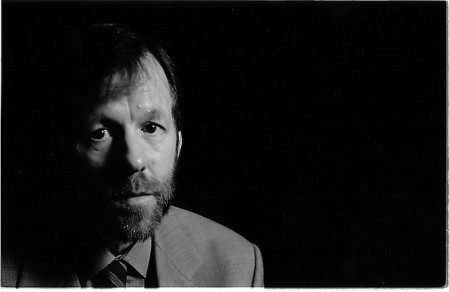 In 1994 or 5, David Wheatley and I were invited to the offices of the Inland Revenue on South Great George’s Street in Dublin. Fortunately, the occasion was purely social. We had arranged with the Irish poet and critic, Dennis O’Driscoll, to meet for lunch and he suggested we pick him up at his office.

The office building stretched about two hundred metres flush alongside the busy street. For each of the five or six floors there was a band of grooved concrete and a row of aluminium windows – 1970s regulation non-descript. We announced ourselves and waited in the small foyer for Dennis to descend from the off-limits offices above us. Secretaries, government officers, and other employees were streaming out of the lift on their way to lunch. My friend and myself had published a poem each in the Irish Times, and first collections were in the offing. Dennis had contacted us, puzzled that we hadn’t appeared on his radar earlier.

As we were later to discover, he knew almost everything that was going on in Irish poetry, and further afield also – both to the East (he was one of the most important welcomers of Eastern European poetry in the 1980s) and the West (he followed US poetry assiduously, and I would leave our meetings with a long reading list in my jacket pocket). I would later learn that many other poets met Dennis in the same circumstances (on one occasion, I have heard he was visited thus by Seamus Heaney and Czesław Miłosz).

As David and myself sat there for the first time, government bureaucracy stacked above us, it was hard to escape the feeling that we had been called in for a friendly interrogation by the central intelligence agency of world poetry.

About ten years later, when visiting Ireland and meeting with Dennis for our now customary lunch in the Indian restaurant across from his office, I mentioned that I had had dinner a few days before with a group of poets of my generation, some of whom were known for critical appraisals of their peers and elders. Dennis raised his eyebrow with amusement, and said, “Indeed the transcript arrived on my desk this morning.” His grim office building filled the entire window of the restaurant, and for a second I thought of the Lubyanka. I told him I was glad that it was in safe hands.

The civil service in Ireland is considered a safe, pensionable job, but Dennis used it as a base for adventures in the world of poetry, both by writing it himself, and by producing some of the most learned, witty and urbane criticism of the twentieth century. Troubled Thoughts, Majestic Dreams (2001) is exemplary in this mode; also his book-length interview with Seamus Heaney, Stepping Stones (2008) was a profound enlargement of our understanding of the Nobel laureate. He was also keenly interested in art, and regularly wrote catalogue notes. His final collection, Dear Life, a hundred plus pages, was published in the year of his death.

When he emerged in the foyer, he was invariably dressed in a dapper check jacket and (unlike many of the other civil servants coming in and out) a neck tie; occasionally he had a waistcoat with a watch chain. He would scatter greetings to colleagues as he went, sometimes in Irish. It’s almost two decades ago since we first sat there, so I can’t be sure if he came over, fixed us with his stare and said: “So there you are.”