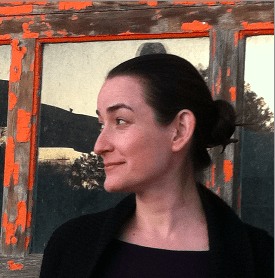 Failure says his ancestors
have owned that property for years.
If you watch it, he says, you can see
their ideas moving beneath it,
releasing bit by bit the water into
the water.

As if I’d shone a flashlight through his body and inside:
against a wall, writhing, shadow puppets—
too many animals for the pen to hold.

I’d once used my grandmother’s ruby glass to cast red onto everything: Bowl with a heart. TV with a
heart — Everything ready to beat.

In my mouth the glass vial of mercury to measure
the heat of my blood.
My teeth against it, ready to bite, resisting.

Outside us, the edges of the desert orchards. The trees are envelopes of yellow leaves, tied in the
country song, here or there a leaf edged in the black of the burning sun.

When Failure talks, he hits his open hand against his breast bone
for emphasis, as if his body might disappear
in its projections, its own murky insides, his experiments.

Like autumn, the world burns through what is living, ashes the rest on the dry ground.

SASHA WEST‘s poems have appeared in Ninth Letter, Forklift, Ohio, Third Coast, The Journal, Canary, and elsewhere. These poems are drawn from a book-length poem, Failure and I Bury the Body, which won the 2012 National Poetry Series (forthcoming from Harper Collins, Fall 2013). She lives with her husband in Austin, TX, where she teaches writing to graduate students at UT’s LBJ School of Public Affairs.