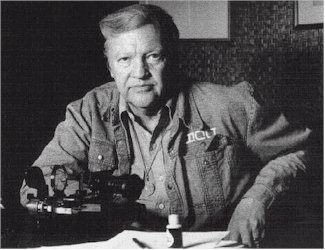 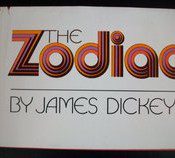 The Zodiac
By James Dickey
Doubleday, 1976

Here’s a little Friday gem, a diamond from the used-book shelf: The Zodiac, a book-length poem by James Dickey published in 1976 and relatively unheard of since then.

As a writer, Dickey was a polyglot: Perhaps best known for his novel Deliverance, but also a talented poet who was respected by James Wright and Stanley Kunitz among many others. Dickey’s particular talent blends novelistic narrative and metamorphic lyrical power. It is clearly on display here.

In a brief introduction to the poem, Dickey claims that The Zodiac is based on a poem of the same title by the Dutch poet and writer Hendrik Marsman, who was killed in 1940 trying to escape to Britain, when the ship he was on was torpedoed by a German submarine. This wonderfully kaleidoscopic poem narrates the return of a poet to Amsterdam after years of traveling, drinking and philandering. Attempting to reconnect with his poetic gifts, he finds solace in the stars and a perceived interconnectedness among all things in existence.

Dickey admits in his forward that he has so changed the poem that the final work is not a translation. And indeed, some scholars have more or less proven that the poem is more autobiographical than Dickey lets on. In any case, The Zodiac is a marvellous accomplishment by a talented American poet who is unfortunately not as widely read today as he once was.

Dickey’s voice here blends the mystical outlook and soft surrealism of the Deep Image poets with a pugilistic intensity. The writing is dynamic, with emphasised caesuras spreading lines across the page, as the narrative moves ahead on the power of Dickey’s voice more clearly than on the story he’s telling.

The Zodiac is very much about the act of writing, or the feeling of intense self-loathing that comes to a writer when he feels unable to do what he does best, that is, to set the words down on the page. Much of the poem wrestles with the act of utterance itself, and several of the sections end in deep despair at the impossibility of communication through language.

Thicket of twilight.
Words.
How?

Other portions of the poem are more playful, alluding to the aquavit and whiskey the narrator has consumed, and taking on a crankiness that is humorous even as it seems to express a deep depression. This particular passage is reminiscent of James Wright’s “Two Hangovers.”

A clock smash-bongs. Stun. Stun.
A spire’s hiding out in the sound tower-sound and now
Floating over him and living on the nerve

What comes through most clearly in The Zodiac is the elemental power associated with the act of writing. This is coupled with an interest in the stars and the constellations overhead, so that being able to see and read the constellations, a skill that has been associated with sailors and seers both, is conflated with the power one feels when able to capture the essence of life in language, and to lose oneself in art, to get away from oneself in poetry.

A face-up flash. Poetry. Triangular eyesight. It draws his
fingers together at the edge
Around a pencil.

Dickey was no stranger to long poems. His poem “Falling” published in 1967, features the long lyrical reach as well as the caesuraed lines that are present in The Zodiac. Here we see Dickey stretching his line foreword, moving toward prose, yet emphasising the raw rhythmic power, the incantatory lack of stasis that poetry possesses. It’s worth finding, and reading.