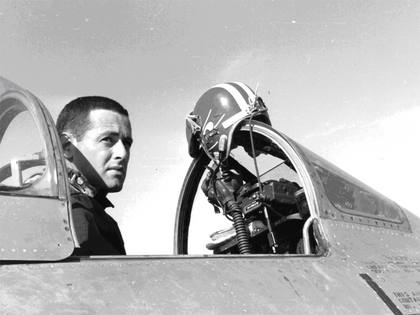 James Salter is “a writer’s writer,” that back-handed compliment demonstrating a novelist or short story writer’s respect among other practitioners of his craft, but also intimating that his work is not widely popular. It may not be possible, after all, to be a writer’s writer and a reader’s writer at once. But if any contemporary American writer is deserving of both titles, it is James Salter.

Many of Salter’s peers have remarked on the remarkable craft of his writing, as well as its lyrical nostalgia. “Sentence for sentence, Salter is the master,” wrote Richard Ford. And it is true, Salter leverages stark craftsmanship with intensely evocative powers of description.

So, without further ado, here are some personal favourite Salter passages. 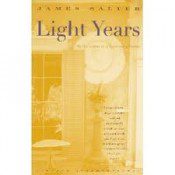 They ate in a Chinese restaurant that was crowded on weekends but this night rather empty. The menus were worn and coming apart at the fold. He had two vodkas and showed his children how to use chopsticks. The dishes were set on the table and uncovered: shrimp and peas, braised chicken, rice. Two lives are perfectly natural, he thought, as he picked up a water chestnut. Two lives are essential. Meanwhile he was talking about China: legends of emperors, the stone pleasure boats in Peiping. Nedra seemed watchful, quiet. He suddenly grew cautious and became almost silent, afraid of betraying himself. There was something he had overlooked, he tried to imagine what it was, something she had noticed by chance. The guilt of the inexperienced, like a false illness, bathed him. He tried to remain calm, realistic.
—Light Years

This paragraph, from Salter’s 1975 novel Light Years, depicts a turning point in the relationship between Viri and Nedra, husband and wife, when she begins to suspect he is having an affair. Like another Chinese restaurant scene, from John Updike’s Rabbit, Run, the depth of the protagonist’s doubt is contrasted with the exotic plethora of the food on the table. The chatter of Viri’s monologue, a guilty man trying to cover the silence, is set starkly against the single, four-word sentence describing the watchful Nedra, silent as her husband betrays himself.

They lay beside one another in the dark. In a drawer of the writing table, buried in back, was a letter composed of phrases clipped from magazines and papers, a pasted letter of love with jokes and passionate suggestions, a famous letter sent from Georgia before they were married when Viri was in the army, aching, alone. There were bees nesting in the greenhouse, erosion along the river shore. On a child’s bureau, in a box with four small legs, were necklaces, rings, a starfish hard as wood. A house as rich as an aquarium, filled with the rhythm of sleep, limbs without strength, partly open mouths.
—Light Years

Here we see Salter’s peculiar talent for sweeping views that remain attentive to minute particulars, which is also evident in the following passage, from Salter’s biographical collection of essays, Burning the Days (1997). The barbed promise of the nesting bees, the erosion of the river shore, the wood-hard starfish: Deeply evocative images that metaphorically mirror the relationship of our married protagonists. Salter’s pacing here is also remarkable, particularly the run-on second sentence, which ends “in the army, aching, alone,” a moaning ache of language. 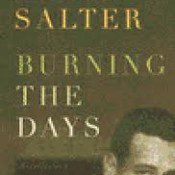 Finally, ashamed to be seen, he would lie in bed for hours, unable to summon the energy to go to work. His expensive shoes, all polished, were lined up in the closet, his many suits. The contents of his pockets were on top of the bureau beside his exhausted checkbook, his gold wristwatch, money, a few cigars. His hair was white, his jawline slack. He was finished.
—Burning the Days

Describing his father, whose finances evaporated in the stock market crash, Salter paces these sentences masterfully. The languor of the long, comma-stretched first sentence. The tapering of the rhythm to the short, devastating final sentence. The objects, once symbols of wealth, now dead souvenirs. Delightful.

We had many aces: Thyng himself, Asla, later shot down, Baker, Lilley, Blesse. In our squadron alone there were Love, Latshaw, Low, and Jolley, as well as latent others with four victories, ready on any day to climb down from their plane in triumph, grinning, genuine at last. For me, though, for reasons I cannot fully explain, Kasler was the nonpareil.
—Burning the Days

This passage, detailing Salter’s time in the Air Force, wrings a sweet, evocative power from the very names of his fellow pilots. Listen to the trochaic pulse of “triumph, grinning, genuine at last,” which is flipped into an iamb in the opening phrase of the last sentence, “for me.” There is an attention to sound and sense here, the mark of a poet that is impossible to fake.

I don’t know where we went that night or what we drank, but the real Paris appeared near dawn, in the faint light, with an image like Mahomet’s paradise: driving through the streets with six girls and the top down, some of them sitting on it or beside us, two on our laps. It was like riding banked in flowers. Montmartre was grainy in the early light in which everything, every deformity and cheap enterprise, every grubby restaurant and shop, was pure.
—Burning the Days

Salter has an ability to describe parties, romance, cities, the past, with a lusty hunger that sparks a deep desire; to have been there, to have seen, felt, tasted, touched. His language can make “every grubby restaurant…pure.” 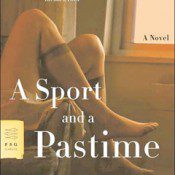 September. It seems these luminous days will never end. The city, which was almost empty during August, now is filling up again. It is being replenished. The restaurants are all reopening, the shops. People are coming back from the country, the sea, from trips on roads all jammed with cars. The station is very crowded. There are children, dogs, families with old pieces of luggage bound by straps. I make my way among them. It’s like being in a tunnel. Finally I emerge onto the brilliance of the quai, beneath a roof of glass panels which seems to magnify the light.
—A Sport and a Pastime

The above opening paragraph, from A Sport and a Pastime (1967), one of Salter’s most popular novels, and certainly his sexiest, creates a world with a few deft strokes. The image of the city filling up again, “being replenished” with people after the summer, is unforgettable. The following passage, from the same book, is poetry.

They are waiting on the street in the late afternoon. The air is thin as paper. The day is raw.
—A Sport and a Pastime 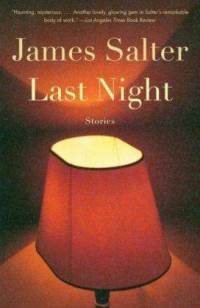 There were crumpled napkins on the table, wineglasses still with dark remnant in them, coffee stains, and plates with bits of hardened Brie. Beyond the bluish windows the garden lay motionless beneath the birdsong of summer morning. Daylight had come. It had been a success except for one thing: Brennan.

These opening lines of Salter’s story “My Lord You,” from his 2005 collection of short stories, Last Night, must be one of the finest morning-after-party scenes in contemporary American short fiction. The linguistic and visual precision of the imagery bespeaks the stillness. Salter’s decision to excise the article in the phrase “the birdsong of summer morning” is just one subtle ornament in this perfectly tuned prose.

Brennan, we come to find out, is a poet. The title of the story is taken from Ezra Pound’s translation of the Chinese poem “The River Merchant’s Wife: A Letter,” which is also cited in the story. Here’s how Brennan is introduced:

It was a drunken man in a jacket and dirty white trousers with blood on them, which had come from nicking his lip while shaving two hours before. His hair was damp, his face arrogant. It was the face of a Regency duke, intimidating, spoiled. The irrational flickered from him.

What concision! What confessions! The free-indirect explanation of where the blood had come from, the poet bleeding from the mouth, the blood somehow soiling too his pants: The debauched prince; the poet. Stylised? Yes. Tastefully so.

Few contemporary American writers combine the eye, ear, and heart of the poet with the sure solidity of crafted prose. James Salter does that, and more. Read his books.