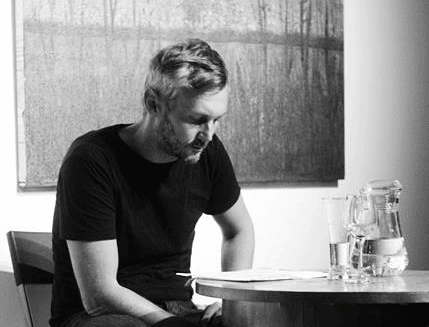 Translated from Czech by Justin Quinn

They’re sawing through the plane trees near Place Sainte-Catherine. 5 a.m., darkness, drizzle and not a soul about (neither on the street nor at windows) – just a three-man team working through the tree-tops. Two surprised blackbirds observe this awful event slantwise from the pavement (they look like drenched sewer rats); a flock of exasperated pigeons jump about on their favourite architrave, and then drift down to the ledge above the laundrette, and from there up again to the roof of Lycée Maria, and round and round; a magpie tenderly peaks into a chimney. Three men in black hoods and orange vests, three weird Franciscans in water-proof overalls, at work (one on an extension ladder, the second on a platform, and the third – who knows how he got up there). The small chainsaws (also orange) melodically bite into the branches, and leave orange and ochre circles in their wake; an orange light rotates crazily on the platform, sweeping the walls and multiplying itself in the windows. The circles and stains on the trunks and the stronger branches mount up. The sawn branches fall down on the paving (one impact frightened off the rat couple), the wet bark peels off and reveals further shades of orange. From the streaked church of Sainte-Catherine can be heard the passionate airs of a bird – probably a thrush – but the darkness and the dim, soft rain doesn’t draw off, and tens of stains, lights and flares, flash off and on, bobbing about in the space of the square. A strange place, cordoned off. No-one’s allowed there in the morning. The thrush has gone silent.

The monks in the tree-tops don’t see me when I wander into their chapel and pick up a branch that’s been cut on both sides: stout and short, it would make a good axe-haft for chopping the monastery’s timber. I hide it under my coat and slope off around Taverne Cyanopica on rue de la Écharpe. I disappear in the rain, clasping the thing under my coat. It’s cold, wet, firmly formed – that chill fist, a piece of marble statue from the municipal gallery, a wolf’s leg stolen from a hunter’s lodge (the glass-case full of Brussels porcelain, motifs of the chase, just inside the door, remember?).

Oh, so much free time in a strange city. Torrents of a language I don’t know, an ocean of strange people, not to mention the strange empty spaces those people leave in their wake. No patrons yet in Café Modelg. I choose a place with a view of the street (the main road quiet, a waiting taxi whose bright sign illuminates the name of the brick cinema on the corner), and when the waitress appears at the table (all in black, with a white apron), I freeze. She’s the spit of one of my friends–the sister he never had. I take the face of the waitress and stuff it under my coat along with the plane branch, and toy with it for a few moments, thinking how often I meet the “siblings” and “parents” (“mothers” especially) of people I know, as well as their future and past selves. Outside the glass, the day is breaking. The taxi driver has turned off the name of the cinema and in the half dark it seems that he’s licking the interior of his car (he’s merely leafing through today’s newspaper with the help of his chin). From the stainless-steel jug I empty the last drop of cream, and then I check it out. When I see the screw that patiently holds the metal lid on (a light clink of tin and the thickness of cream), I resent the unavoidable conversation which I will have when paying. I don’t want to speak, I don’t want to move, I only want to watch. Gently, with my gaze fixed on the bar, I slip the small vessel up my sleeve.

Later I walk along rue du Cirque scanning the ground. I pick up part of a knife-handle with ‘Egypt’ written on it and the carved head of a Pharaoh’s sarcophagus, a copy of BDW from last week (still sealed in its plastic bag), a hair band (they’re everywhere, but this one is clean, black, threaded with silver, with a unrusted clip, no hairs on it), a broken chain that was curled in the dirt of a puddle and a perfumed small Bvlgari bag, completely dry, its folds more perfect than those of all the houses nearby. I fish out an envelope with a catalogue in it from someone’s post-box. The Chinese supermarket is already open. I follow an older Chinese woman, placing in my basket exactly the same things that she does. And then – there are cars now in the streets and the magpies in rue Dansaert look like washed black socks against a background of white air – in Boutique Cuculus I buy the same silk scarf with tassels that I saw on the man behind the counter of a second-hand book-shop on rue du Midi.

The apartment I have for my residency houses my collection. I clean off my haul, and place it among the older acquisitions. The floor of the study is almost covered. I usually pick up and examine one object after another, but not this morning. Today, for whatever reason, only one catches my eye – the one I stole last week in a tiny antique shop somewhere near the conservatory (the owner, a talkative old man, was called Sante Pezzatura; the name was in the corner of a display-case): an African Goliath beetle (a black and white variant), furred like a peach, upright with outspread elytra and wings under a glass cover, divided up and threaded along a golden wire in pieces. The whole outrageous arrangement was intended to create the illusion of the magisterial flight of this beetle. I turn the relic over against the light. I study its every detail and I feel how the grandness of this rare piece continues in my head. I knot my new scarf, lock the apartment and take the steps two at a time. For a few days now I’ve cased out a car (Volvo, silver, lots of them about). With the wire sunken in the Pharaoh’s knife-handle, I unlock it, tear out the innards under the steering wheel (this I know how to do) and gently turn the ignition. All goes swimmingly, and when I pull up at a red on the first junction, I straighten the fold of the Bvlgari bag on the passenger seat and feel the dizziness brought on by the vision of that storming Goliath, and make space for the first stanza of my first poem in this town.

PETR BORKOVEC will publish a new collection of poems this year entitled Milostné básně [Love Poems] in Czech. He has translated the work of Joseph Brodsky, Vladislav Khodasevich and Yuri Odarchenko from Russian. He teaches at the Josef Škvorecký Literary Academy in Prague and runs the reading series at FRA Café.

Read poems by Justin Quinn in B O D Y