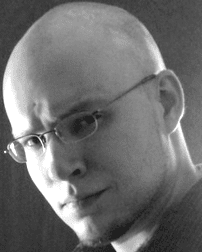 To call Mathias Nelson’s debut collection of poetry, Dip My Pacifier in Whiskey, intensely autobiographical would be to understate the matter considerably.

The focus of these ferociously personal poems is the poet’s family. Nelson lets his mother, father, brother, granny, autistic nephew, et al taste the lash, though it must be mentioned that Nelson does not spare himself the beating. The old George Burns one-liner comes to mind: “Happiness is having a large, loving, caring, close-knit family in another city.”

The opening stanza of “In a fresh cotton T” sets the standard and lets the reader know how far Nelson is willing to go in order to understand the inter-relational dynamics between himself and his family members:

My little nephew is fat.
When he eats he breathes deep between bites, like someone
between sexual strokes.
It disgusts me. I know
I’m not supposed to state it.
Disgusts me.

It is interesting to note the use of “state” and the way Nelson utilizes it alongside repetition to make clear that the poet sees his own salvation through the naming of unadorned truths.

The Mathias Nelson of Dip My Pacifier in Whiskey is a man of a million complexes, spending his days hiding in his smelly bedroom, given solace and driven mad by his relatives. He is self-pitying, tender, confused, stoical, grotesque and as funny as two drunks fighting on an ice rink. The poems are filled with radiant observations which are almost child-like in the way Nelson takes an up-close and bewildered look at his surroundings in an effort to understand and make sense of the circumstances he finds himself in.

The title poem opens the collection and is a template for the book, as it lays bare Nelson’s foibles, phobias and general anxiety condition:

I’m sober as the day I was born, and as terrified too.
Sometimes I think maybe I just need a spank
to let it all out. Preferably from a beautiful nurse
who doesn’t care if I’m a young man with bald spots.

He ends the poem:

Setting aside the the psychological implications of the vagina as a death both longed-for and dreaded, only the most po-faced readers might succeed in stifling a laugh.

Dip My Pacifier in Whiskey is weighty, coming in at 158 pages, and in truth, some of the flab might have been cut. A few poems lack sufficient insight to balance the conviction of the speaking voice, or else devolve into vulgarity:

I want to fuck Sharon Old’s mind,
that mind sucking on my cock

This kind of language could come off as purely for shock value if it weren’t for the naked and obvious distress running through Nelson’s work. He is skilled at bringing life, the real terrifying deal, into a poem. Here he is, accidentally reading a text message his brother intended for another man:

In a few of the poems, the influence of Charles Bukowski is clear and Nelson doesn’t try to hide this: Indeed, one poem is titled “I Ate Bukowski”. But Nelson’s voice is much more than the sum of his influences. It is gruff, driven by insight, deep feeling and no little craft. It is also infused, despite the harsh words, with tenderness towards those who surround him.

Nelson looks to his saviours, black humour and plainly-spoken truths as vehicles for the poems, transporting the reader to wisdom among some very funny and very dark cargo, as in “A Poem You May Want To Reread”:

My brother’s wife
talks a lot of dumb shit.

What are those things called, she says,
I like them. It starts with a “P.”

No, no, they’re flowers. Um…
Peonies, she yells, I like peonies!

I look at my Caucasian brother,
wink.

This is relatively new voice in American poetry, one which cries out amongst all the ironic posing and escape-chute-ism that is currently popular. These poems exit by the front door.

Nelson writes, “I have erected a rather whorish schlong of language…”
Yes. Yes, this is true.