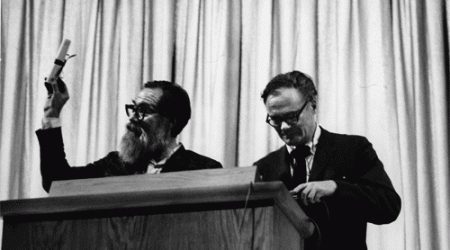 Halloween night, 1963. John Berryman is reading with Robert Lowell at the Guggenheim Museum in New York City. This is the first time Berryman has read publicly from The Dream Songs, the first volume of which, 77 Dream Songs, will be published next year to great acclaim including the Pulitzer Prize.

But Berryman has other things on his mind. He opens by saying that he intends to give some remarks about “poetic diction.” He then tells a story about “a really big banker, a complete and absolute jerk” who has his butler polish a pile of red apples and put them in a basket by the front door on Halloween. A little “tot” comes to the door trick or treating. The banker drops a big, beautiful apple into the tot’s bag and the tot looks up and says “you big shit, you’ve broken my apple—my cookie! I ruined the story. Sorry. I ruined the story. But I think we can work out a theory of diction from this story.”

Did he really ruin the story? Probably. The audience doesn’t seem to mind. That’s the experience of reading Berryman. Is this poem, this letter, this unfinished novel going somewhere other than off the rails? It’s a pleasure to go along for the ride.

There’s something else about the story that’s typical Berryman: the praiseworthy audacity of using language to challenge authority, be it big banker, fate or father figure.

Meanwhile the great hall of the Guggenheim (according to Berryman, a building “about which the less said the better”) is echoing with laughter. Berryman then reads his first poem, which remains unfinished though he says he has been working on it for 15 years. It is written in seven-line stanzas, the title is “Scholars at the Orchard Pavilion,” and Berryman reads a single stanza:

Sozzled, Mo Tzu, after a silence, vouchsafed
A word alarming:—We must love them all.
Affronted, our fathers’ shades jumped.
—Yes,—he went madly on, and waved in quest
Of his own dreadful subject,—O the father
(He cried) must not be all.
Whereon upon consent we broke up for the day.

The reading may have begun precariously, but this stanza puts Berryman back in control. The madcap compression, the feint and weave of syntax, the jostling of high and low diction, the surprising musicality—this is vintage Berryman. But for the poet, there is something more significant in these lines.

The year before this reading with Lowell, in March of 1962, Berryman wrote to his son Paul, who was about five years old at the time. He concluded his letter with this same stanza, writing: “Now I’ll copy out for you a stanza from a grown-up poem which I was working at in California three years ago (and in Princeton NJ fourteen years ago): it’s called ‘Scholars at the Orchard Pavilion’… When you come to understand this stanza, and why I have now quoted it to you, you will be an educated Poukie or Paul-sensei.”

The next month Berryman shared the same stanza in a letter to Lowell, asking “that’s the stanza-form, how do you like it?”

Here was a man obsessed with a poem.

But the pursuit of poems, of stanzas—and of poetic diction—was lifelong, and these themes unsurprisingly appear throughout Berryman’s letters. Anytime a poet, established or aspiring, wrote to him with details about something they were working on, Berryman would fire back with “what’s your stanza?” Form was foremost. Here was a man obsessed with poetry.

There is an obsessive quality to all of Berryman’s best writing. He possessed a studied yet uncanny control of language, a twisted sensibility evinced in precisely pulverized syntax, and a devout need to turn his life into self-reckoning lyrics. His correspondence is of course more prosaic, but still charged, especially as the quotidian details of Berryman’s work, travel and relationships illuminate some of the dark corners of The Dream Songs.

Berryman’s masterwork of the 1960s seems far more grounded (but no less marvelous) after reading his correspondence, complicating his insistence that the protagonist Henry was “not the poet, not me.” Reading first-hand accounts of events that informed The Dream Songs actually makes Berryman’s greatest gifts and contributions to poetry—a determined, lifelong grappling with language and the possibilities of phrasing, music and syntax—seem all the more remarkable.

But these letters aren’t just shoptalk. Berryman was ill for much of his life with various mental and physical ailments, including acute alcoholism. His stays in hospitals and clinics are duly, at times harrowingly, recorded here. There’s a stomach-turning sense of denial in the letters where Berryman complains about the nervous tension that causes him to vomit nearly every day, sometimes more than once. Surely the daily infusions of whiskey and other potent potables were at least partially to blame.

But through it all Berryman was faithful to language, to poetry, to the literary tradition and to his friends. Less so his wives. His correspondence with Saul Bellow is particularly affirming. And sometimes Berryman’s alcoholism proved valuable, as in the spring of 1964 when he wrote to Bellow with feedback on a draft of Herzog, a novel that would win the National Book Award.

Commenting on one passage, Berryman writes: “there’s no Guckenheimer 95, my dealer tells me—I drink 86 proof, and % has nothing to do with proof and shd be deleted. So I think and am told. This 86, for instance, my favourite whiskey and I am drinking it this minute, is 30% straight & 70% neutral spirits.”

Berryman may have been more of a drinker than a calculator—he is wrong on the relationship between percentage and proof—but he was a very careful reader.

Despite his seeming inability to find physical, mental or spiritual equilibrium, Berryman was one of the finest literary minds of the 20th century, a teacher at some of the best American colleges and universities, a scholar who wrote respected works on Shakespeare and Stephen Crane. That erudition is almost always displayed in his letters, including a wonderfully bitchy book review of a biography of Gerard Manley Hopkins which Berryman shares with a girlfriend in 1943, thinking “it will entertain you” and hoping “this will teach the fool not to write any more books.”

But like so many other brilliant, troubled American poets of the mid-twentieth century, including Sylvia Plath, Anne Sexton, Robert Lowell, Delmore Schwartz, Randall Jarrell and Theodore Roethke, Berryman’s biography threatens to overshadow his writing. The Selected Letters of John Berryman strikes a balance between literary and personal interest. Berryman’s late, valiant but ultimately failed attempts at sobriety and writing are vividly displayed. He seems more manically determined yet less sure of himself after giving up alcohol repeatedly in the years before his suicide in 1972 at the age of 57. These last letters are difficult to read, both because they show Berryman as a shell of his former self and because they hint at future projects never realized.

In his last years Berryman planned to write a dozen books at once, but made little definitive progress. He plaintively asked friends and editors for comments on manuscripts, betraying a sense of indecision, of decisive powers waning, so different from the soggy, narcissistic aplomb he exuded in correspondence when writing The Dream Songs.

The publication of these letters is part of a recent Berryman renaissance, which also includes a collection of interviews, and reissues of Berryman’s poetry. His reputation seems only to be growing. His correspondence gives the fullest sense of Berryman the man, the poet, the lover, the husband and father.

Some of the most affecting letters here are addressed to Berryman’s estranged son Paul, or Poukie as the poet called him. Most of these explain or allude to Berryman’s absence and his inability to visit for health or monetary reasons. Berryman once wrote “The only things that matter are long poems and children.” The order of these two subjects does not seem random.

In June of 1963, a few months before the Guggenheim reading, Berryman wrote to his son:

Perhaps this is the hardest letter I have ever had to write. Besides, I don’t know what a little fellow understands; your mother will read it to you and explain what she can. I can and have made hundreds or thousands of people laugh this year, but not you. Is weird. She used the expression, powerful, ‘mysterious and rough’, about my not coming to see you. I have been trying to write to you for months, only there was a little problem: I can’t write without explaining why I didn’t come to Peekskill, and I couldn’t enter on an explanation without referring to my health. Now, two things a parent does not do to a child is: complain or seek sympathy. Namely you don’t disturb the child nor do you want anything. But I have finally decided that the overruling law here is to be less ‘mysterious’.

These letters make Berryman less mysterious, more human. Less a sozzled immortal and more a person struggling like all of us.

But what was it that made “our fathers’ shades” jump in the orchard pavilion? Why couldn’t Berryman let go of that poem? It would eventually be published in Delusions, Etc., a collection that was in proofs at the time of his death. Clearly the father figure was central to Berryman, whose own father killed himself when the poet was 11 years old. In fact, Berryman’s last name was Smith until his mother remarried.

Berryman’s struggle with his father’s death and his struggle to be a good father propelled much of his life and work, not least “Scholars at the Orchard Pavilion,” which makes a statement about being a father and a son that Berryman couldn’t seem to make anywhere else but in poetry: “we must love them all,” our fathers, while seeing beyond them, because “the father must not be all.” For Berryman, tragically and triumphantly, the poem was all.