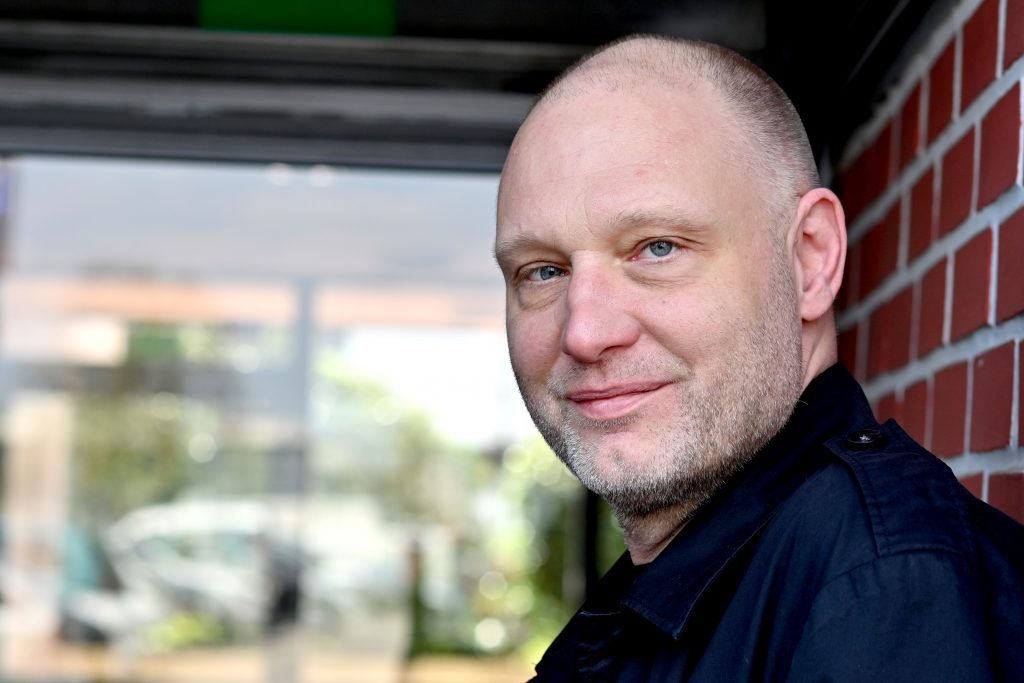 Thanks to the automatic system of the old days, I had been registered as a member of the Association of the Blind and Visually Impaired more or less since birth, but never until now had I visited their headquarters. A sharp beeping noise went off in the old house; it was so irritating that I covered my ears and stood frozen in the doorway. Fortunately, a woman quickly appeared and switched off the unpleasant noise; she then escorted me to a room on the first floor where the blind intellectuals were meeting.

‘Welcome to home turf!’ their president boisterously greeted me.

The polite handshakes that followed included none of that waving of arms which, like all normal people, I expected from the blind. Words and gestures – everything happened precisely when it was supposed to. A group of entirely ordinary people – mostly men but some women, too – were seated around a long oval table. Two or three wore dark glasses, and there were a few white canes leaning against the wall.

The president of the blind intellectuals was in no hurry to start the formal part of the meeting. He merrily recounted an incident that had taken place a few days earlier, when he nearly ran his bicycle into a young mother pushing a baby buggy. In shock from the fright, she yelled at him: ‘What are you, blind or something?’ ‘That’s right, young lady, I am,’ the seasoned cyclist had replied, and now, among his own people, he was reaping cheers, as well as a colleague’s taunt: ‘My eyesight’s worse than yours but I’ve never harmed any girl!’ I soon realized that everyone here must ride a bicycle, except for those with the dark glasses and canes, although for all I knew maybe they did, too. As for myself, it had never occurred to me to ride a bike into the chaos of street traffic. I had only ever ridden one as a child. My cycling career ended at the close of my eighth year of school, when I had a bloody tumble on one of our suburban streets. While my mother was screaming at me – Was I trying to kill myself? – my father hid the bike somewhere I wouldn’t find it. Actually, everything had been decided four years earlier, when, although I passed the written part of the cycling safety test, neither my parents nor my teachers allowed me to take the practical part.

The thunderous voices in the big conference room at the headquarters of the Association of the Blind and Visually Impaired promised a jovial meeting. I was already thinking this would be it, a free-flowing chat instead of my prepared talk, when the president abruptly called for order and began the official proceedings.

‘My fellow blind people, the time has come! We are gathered here tonight to listen to some wise thoughts about Slovene culture and its importance in our everyday lives. It is my great honour to welcome an outstanding colleague, a literary editor of many years, who is showing all of society the great things we blind people can achieve. Everybody knows that we have the voices of nightingales. But that we can burrow our way through piles of books – well, dear friends, that’s something else altogether!’

It’s true that many are surprised when I tell them that, despite my bad eyesight, I have a professional career in the book trade. In fact, my choice was quite logical. If, like other children, I had spent a lot of time sitting in front of the television, I would probably never have become a bookworm. We watch television from an appropriate distance, my parents would tell me; it gives off radiation, which is particularly dangerous for the eyes. In my imagination, the television set became almost like an atom bomb. My problem, however, was that from an appropriate distance I saw nothing, or next to nothing, just colours bleeding into each other and changes in the light; for the most part, I could only listen to TV. So watching the news was easiest, sports much harder, and cartoons were a real frustration. Every so often, I would slip closer to the screen to see a goal being scored – at such euphoric moments my father barely noticed me – or to watch that cartoon where Whisk the Dwarf dives into his pond beyond the Nine Mountains and disappears. If I lingered even a moment too long in front of the set, someone would soon say something to me, and at once I would meekly retreat behind the invisible line. It all seemed fairly hopeless. But then one day my grandfather allowed me to watch an entire ski competition up close, only about eight inches from the screen, and even closer when it got exciting. I watched from the right side of the set – only my left eye is of any real use – while my grandad watched at an angle from the left so my head didn’t obstruct his view too much. Grandma soon uncovered our conspiracy, but grandad’s reasoning won the day: since their TV was only black-and-white, there wasn’t as much radiation, and, anyway, it was a special occasion: the great Matti Nykänen was jumping. I promised to move my chair further back during the break, which was enough to placate her that first time. From then on, I watched all the critical sports events up close – from football, basketball, and skiing to track and field and boxing. Unlike my grandma and grandad, my nan and my gramps – my other set of grandparents – had a colour TV, so in their living room watching up close was strictly forbidden.

After a while though, my nan permitted me to watch half an hour of Tom and Jerry on one of the Austrian channels. Similarly, every day around two o’clock, until I started going to school, she would give me a piece of chocolate, not too big and not too little; it was the most dependable thing in my life. My parents eventually caught on to these deceptions, but for a long time we all pretended that nothing was happening.

It wasn’t until I was thirteen or fourteen that I had the urge to watch television close up in my own home and not just at my grandparents’ houses. ‘You’re ruining your health!’ my parents would nag whenever I did this, but they were powerless against my teenage rebellion. By then, however, I was more addicted to books and would often read late into the night. ‘Don’t wear yourself out,’ my father lectured. Sometimes he even switched off the ceiling light in my bedroom, to protect me from the artificial illumination. But that didn’t stop me. I used a torch to read under the covers or switched on the bedside lamp, which had a soft glow that was less noticeable through the transom window above my door. There was no going back. My fate as a passionate reader was sealed.

I cleared my throat and looked at the people around the table. On such occasions I always said the same thing.

‘Until recently,’ I began, ‘we Slovenes did not have our own country. Which meant we did not have our own army, currency, diplomats, football team, or, indeed, anything that goes with having your own country. Under such circumstances, the role of nation-building was assumed by culture. Whenever we talked about the nation, we were talking about culture, and above all, about the culture connected with our unique language. If God is just, we believed, he will judge us by our poets, who can stand side by side with the world’s greatest. Prešeren is our Dante, our Petrarch, our Pushkin! But while we glorified our dead poets, the living ones mostly got on our nerves, with all their boozing and grumbling. So when the country of Slovenia was born, we were finally able to openly despise our poets, poetry, and art in general, that entire freak show of inebriated lunatics who think they’re superior to everyone else… Now we have everything the great nations have. It’s true that, out of decorum, we didn’t do away with culture, and we even have a public holiday devoted to it, but simple common sense tells us that it’s all irrelevant and what’s really important is dealing with social issues—’

‘That’s rather harsh,’ the president broke in.

‘Well, maybe I’m exaggerating. Not everyone is indifferent – some people do understand that without culture there can be no—’

‘We get it, we get it. But it’s true that we arty types really do a fine job of mucking around!’ he said with a big laugh. He started reminiscing about his younger days, when he was studying painting, but because of his failing eyesight he was gradually giving it all up and instead would go boozing in the pubs near the academy. Once he and his mates had even been out boozing with the great poet himself –although back then, of course, he was not yet the great poet. And who would have imagined that one day he would be? Although he did have promise. But who didn’t back then?

At this point I jumped in and started crowing about how, just a few months before the death of that contemporary giant, I too had been out boozing with him. Then I added importantly: ‘He even told me the name of the person who, many years ago on some Dalmatian island, had screwed his then-wife while he himself was snoozing away, pleasantly drunk, after lunch. And less than two months after he died, this same man invited me to speak at a symposium dedicated to the great man’s poetry!’

We all laughed like idiots. Blind people aren’t so bad after all. I was a bit embarrassed that it had taken me so long to realize this.

For decades, MITJA ČANDER has been one of the most influential figures in Slovenia’s literary and publishing world – even though his literary debut, Blind Man (Slepec), appeared only in 2019. An editor and literary critic, the co-founder and director of Beletrina Academic Press, essayist, screenwriter, dramaturge, columnist, and candidate for national chess master, Čander has accomplished many things in his career and taken a leading role in a number of major projects, such as Maribor – The European Capital of Culture (2012). Since 1992, he has published many articles and essays on Slovene and world literature and received numerous awards for his work. A wide-ranging intellectual, he is a regular participant in discussions that reach far beyond the cultural sphere, so it was only a matter of time (and genre) before he tried his hand at writing fiction.

RAWLEY GRAU, originally from Baltimore, has lived in Ljubljana since 2001. He has translated numerous works from Slovene, including two novels by Dušan Šarotar, Panorama and Billiards at the Hotel Dobray, both of which were shortlisted for the Oxford-Weidenfeld Translation Prize. Other translations include Mojca Kumerdej’s award-winning novel The Harvest of Chronos and her short-fiction collection Fragma, the novels Dry Season by Gabriela Babnik, A Chronicle of Forgetting by Sebastijan Pregelj, and The Succubus by Vlado Žabot, and the short-fiction collection Family Parables by Boris Pintar. He has also translated and edited a collection of poems and letters by the Russian poet Yevgeny Baratynsky, A Science Not for the Earth, which was awarded the AATSEEL Prize for Best Scholarly Translation.