THE STORY: On Ray Bradbury’s short story, “The Pedestrian” 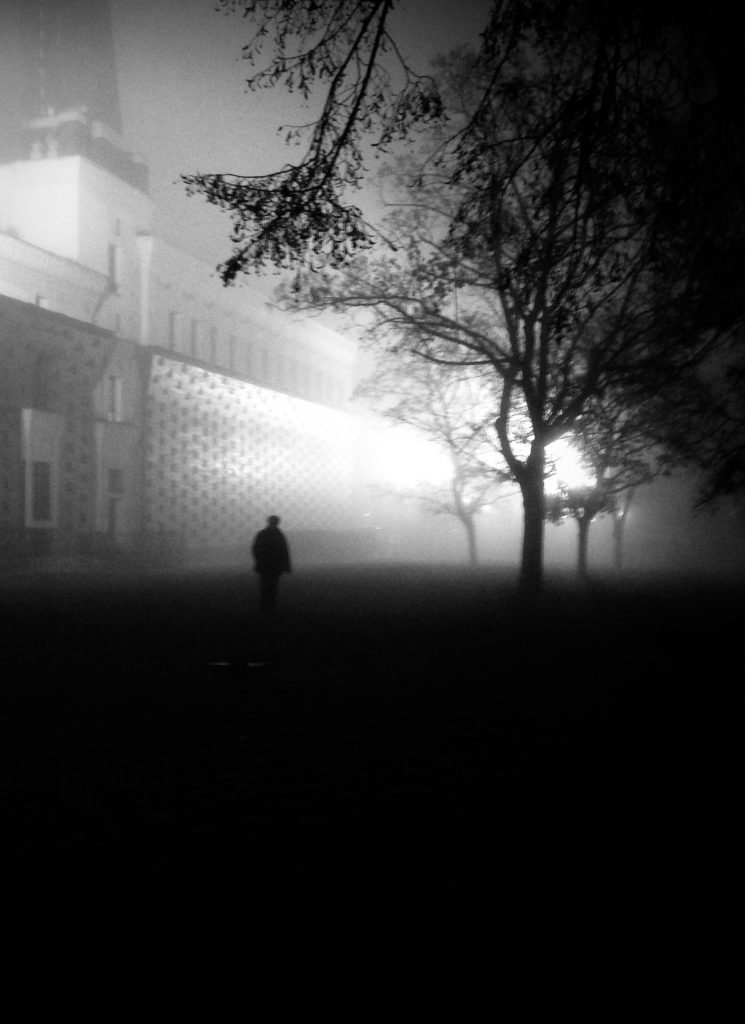 STEPPING OUT ONTO THE STREET in front of my apartment block for an evening walk earlier this month, I was struck by the utter silence and emptiness around me. The night was very cold, with a brilliant frost sharpening the edges of the buildings that added a surreal quality to the neighbourhood.

I quickly remembered that the 9pm curfew I’d forgotten about was still being imposed but was suddenly gripped by a powerful urge to continue my walk and began moving away from my front door, towards the park at the end of my street. In my defence, I’d come down the 154 steps from my fifth-floor apartment and didn’t feel like climbing them again right at that second.

I’ve been working from home since early March last year, sitting at my kitchen table, eating badly, and writing about new technologies  —  a pretty claustrophobic situation — so the openness of space, along with the beauty of the buildings and the clarity of the frozen air created the kind of sacred atmosphere we can sometimes experience when confronted by a total absence of people.

I’d prepared a vacuum flask of hot milk, honey, and quite a bit of rum, and cracked it open as I entered the deeper silence of the park, every sound magnified by the frost and the clear night air. I decided to do one quick round of the park, take in the view over the city, drink my hot toddy, then head back home.

The sound of my shoes crunching in the light snow that had started drifting down, the silence, my happiness within the silence, and the fact that I was constantly scanning for the police who I knew must be patrolling the park, took my mind right back to 2010 when I first read “The Pedestrian“ by the American writer, Ray Bradbury, the story I want to talk about.

I was in Nepal with my ex-girlfriend and things were going badly. Thousands of miles from home, in a collapsing relationship, without money, in a beautiful country, surrounded by human beings, I was profoundly alone, sad, and failed. I needed something to hold onto. Something to show me a way out of my loneliness.

During one of our strictly scheduled walks through Kathmandu to see things my partner had colour-coded in our Lonely Planet guide, I spotted a second-hand bookshop and subverted our program by dipping inside to find a space rammed from floor to ceiling with books, many in English. Books are a lifeline and a currency when you’re traveling. They attain an even higher meaning and value in foreign places where journeys can be long.

The first one I pulled from the shelf was a collection of short stories by Ray Bradbury. I’ve long since lost the book but it must have been a copy of “The Golden Apples of the Sun” (1953) because that’s the only collection which contains his remarkable story, “The Pedestrian”.

Set in a dystopian world where going outside is forbidden and everyone is supposed to stay home in front of a screen and where, since election year, the police force has been cut to one automated patrol car, the story begins with a man, Mr. Leonard Mead, out for a walk one evening:

“To enter out into that silence that was the city at eight o’clock of a misty evening in November, to put your feet upon that buckling concrete walk, to step over grassy seams and make your way, hands in pockets, through the silences, that was what Mr. Leonard Mead most dearly loved to do. He would stand upon the corner of an intersection and peer down long moonlit avenues of sidewalk in four directions, deciding which way to go, but it really made no difference; he was alone in this world of 2053 A.D., or as good as alone, and with a final decision made, a path selected, he would stride off, sending patterns of frosty air before him like the smoke of a cigar.”

The sense of freedom, even before we find out why Leonard’s walk is a rebellious act, is clear, as is his upbeat sense of self-possession. Here’s a man at ease with himself, alone, and walking in the direction he feels like going in. He strides with instinctual ease, led by his own sense of aesthetic appreciation. In this short paragraph, Bradbury introduces sense itself as a key to perception. Leonard uses his senses to navigate, to perceive the things around him, and to decide which direction to go in.

Only later do we learn that he is breaking a curfew. In truth, he’s breaking the most dangerous thing of all — mandates which have grown to not only be accepted by society but enthusiastically taken up and amplified.

Note how Bradbury uses the infinitive to put the reader at the centre of the experience, teasing the first sentence out in the second person before smoothly switching to third-person to introduce his protagonist, Leonard Mead. It’s a subtle move, and all the more effective for it. The reader becomes Mr. Leonard Mead as he walks the silent city streets.

Leonard is a full-blooded human being, sensing and perceiving the world around him, in contrast with the silent streets and the passive, controlled, population trapped inside, watching their screens. In a world like this, you have to tread quietly:

“For long ago he had wisely changed to sneakers when strolling at night, because the dogs in intermittent squads would parallel his journey with barkings if he wore hard heels, and lights might click on and faces appear and an entire street be startled by the passing of a lone figure, himself, in the early November evening.”

‘Hello, in there,’ he whispered to every house on every side as he moved. ‘What’s up tonight on Channel 4, Channel 7, Channel 9? Where are the cowboys rushing, and do I see the United States Cavalry over the next hill to the rescue?’“

The parallels we can draw between the story and our current circumstances — the 4th industrial revolution and the digital transformation of our lives — is clear.

But it’s the theme of inner freedom and creativity as a flame of hope, and as way to live, that interested me when I first read the story in Kathmandu. Because the lessons can be applied no matter your circumstances: trapped in your city apartment or loveless in the Himalayas.

Leonard reaches an intersection, which he reimagines as a vast dry riverbed, when out of sheer bad luck he crosses paths with the only patrol car in the now-crimeless city.

He seems almost stunned by this coincidence, as if his own inner freedom had blinded him to the threat of ever being caught or punished.

Mead is questioned and answers truthfully but slightly casually, revealing himself as someone with creative tendencies, a thinker, an imaginer, when he states his profession, which does not go down well:

“’Your name?’ said the police car in a metallic whisper. He couldn’t see the men in it for the bright light in his eyes.
‘Leonard Mead,’ he said.
‘Speak up!’
‘Leonard Mead!’
Business or profession?’
‘I guess you’d call me a writer.’
No profession,’ said the police car, as if talking to itself. The light held him fixed, like a museum specimen, needle thrust through chest.

This is a world that regards everything as a resource, a place where art has no place, and return-on-investment is the bottom line, policed by algorithms and smart technology. A world that has bought into the ideology so completely that a man like Leonard Mead is an outlaw.  And yet, he has been able to survive in that world happy and undetected for years.

The three moments that hit me hardest occur near the end of the story.

“’What are you doing out?’
‘Walking,’ said Leonard Mead.
‘Walking!’
‘Just walking,’ he said simply, but his face felt cold.
‘Walking, just walking, walking?’
‘Yes, sir.’
‘Walking where? For what?’
‘Walking for air. Walking to see.’

That such things might have to be explained is terrifying.

‘Are you married, Mr. Mead?’
‘No.’
‘Not married,’ said the police voice behind the fiery beam. The moon was high and clear among the stars and the houses were gray and silent.
‘Nobody wanted me,’ said Leonard Mead with a smile.
‘Don’t speak unless you’re spoken to!’“

Mead’s simple “nobody wanted me”, said with a smile, is heartbreaking.

Nobody wanted him because he lives outside of society and sees what others cannot or do not want to see. But it’s a mistake to pity Leonard because the secret is that he’s happy to be alone — to fully exercise and enjoy his senses and imagination, and to go where he sees fit with no interruption.

“The Pedestrian” reminds us there are things of great importance other than being loved or belonging. Many of them lie in our landscapes, and most within our inner landscapes.

The moment that hits me the hardest of all happens moments later. Ordered into the unmanned patrol car, he’s taken away to the Psychiatric Center for Research on Regressive Tendencies and recognizes his own home along the way:

“They passed one house on one street a moment later, one house in an entire city of houses that were dark, but this one particular house had all of its electric lights brightly lit, every window a loud yellow illumination, square and warm in the cool darkness.
‘That’s my house,’ said Leonard Mead.
No one answered him.”

This isn’t just a story of the fight for self, but a story of the value of that fight. It’s about ourselves and our senses, and it’s a shout out to anyone who feels alone and is struggling to find value in that, too.

“The Pedestrian” has helped me many times since I first read it. It showed me a way of being and, in Leonard Mead, introduced me to a character who has stuck around in my life, making appearances whenever he needs to.

It’s strange but I almost don’t notice that Leonard Mead gets taken away in the end. It’s my blind spot in the story and I’m happy to stick with that.

To paraphrase the cowboy from The Big Lebowski:

‘Leonard Mead abides. I don’t know about you but I take comfort in that. It’s good knowin’ he’s out there, Leonard Mead, takin’ ‘er easy for all us sinners.’

And besides, he left his lights blazing, every window a loud yellow illumination, square and warm in the cool darkness, and because the story ends, no one can ever switch them off.

Chris Crawford is a founding editor at B O D Y.