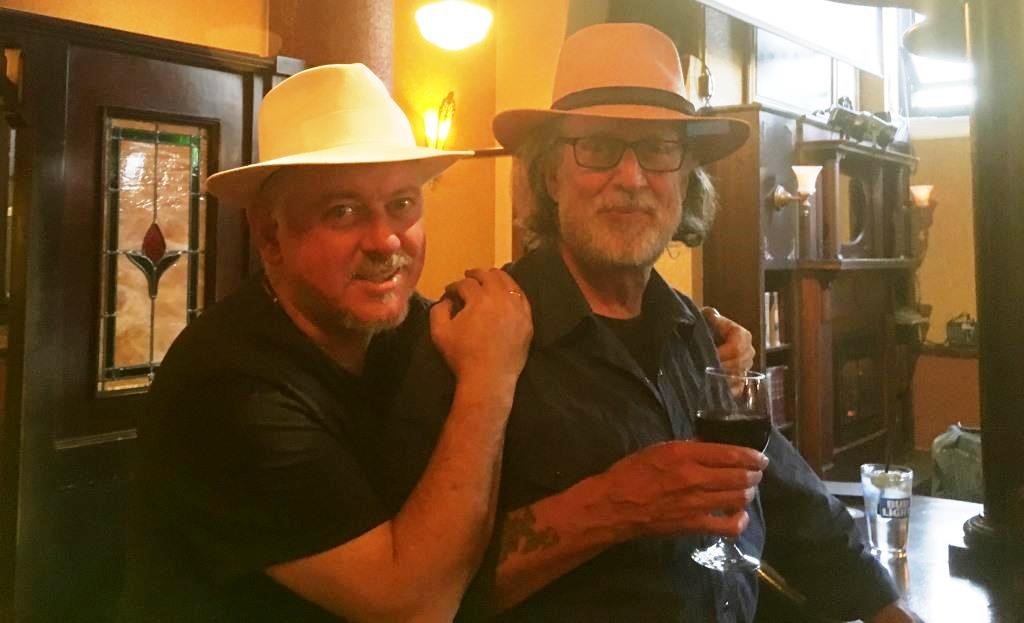 Have you read the poet Mark Terrill?

I started when we shared the pages of Bordercrossing Berlin more than a decade back. He’s great. Late Beat, maybe the last, California-born, living in Germany for decades. I have always admired his poems’ accessible perspicacity, the quickness of perception of an eloquent, well-read mind moving through the world with a perfectly tuned ear and a very powerful bullshit detector.

Terrill’s new book is Great Balls of Doubt, which gathers 96 poems and prose poems originally published in limited-edition chapbooks and broadsides, as well as new, previously unpublished work. Perfectly illustrated by Jon Langford, the collection presents Terrill at his best.

“Dialing in the Verities” is an exemplary ars poetica from an American narrator who came of age as Terrill did in “1960s America,” where Woolworth’s and Dick Tracy collided with rebels like Rimbaud and so-called New American poets like Jack Spicer, often grouped under the aegis of Donald Allen’s crucial poetry anthology The New American Poetry, 1945–1960, who preached “the nomenclature / of the ‘outside’ and the ‘other’” which led Terrill’s narrator to:

eventually train my ears
to ruthlessly comb the ether for the
one true frequency
that slices through all the others.

This quest guides Terrill’s vocabulary and thought. His work is replete with allusions to mid-twentieth-century writers and artists, guideposts in his travels over earth and sea, and his reading’s adventures over textual, conceptual landscapes. All the while his words cling to what matters.

“April Poem” begins with a description of at-hand objects:

This poem, like many of Terrill’s best, rockets above the quotidian, charmingly, even surprisingly transcending the ordinary. “April Poem” ends:

Nights without numbers,
days without names, the newsreel
of reality unrolling in the void;
who is it that keeps trying to be “me”?

Terrill has taken the breath-based, every-perception-must-move-instanter-to-another, post-WWII American poetic form and energy and set off around the universe, his striking breadth of awareness matched by a decisively instantaneous perception and a precise, slowly accrued vocabulary.

“Bardo Kitchen Cycle,” originally published in B O D Y, exemplifies key elements of Terrill’s poetry: the colloquial, considered vocabulary and complex, informed recordings of everyday moments, gritty epiphanies accessibly described with a measured, insistently pulsing line drawn through Rexroth and the working-class Low-Modernist poets of the 1930s, inhabitants of the shipyards where Terrill himself has worked.

My father seated
at the kitchen table
adrift in his dementia
just a few months
before his death.
I’m standing behind him
tying the bib around his neck
flashing on the fact that
sixty-some years ago
while I sat in my highchair
at the kitchen table
he stood behind me
doing the very same thing.
Fucked up that the loved ones
all have to go and even more so
the way they have to do it—
sweet though the way
what goes around
comes around and holds fast
like a mountaineer’s rope
connecting all us
hapless drifters.

Terrill began publishing in northern California in the late 1970s. He has lived in Germany for three decades, writing and translating, among many other German poets and prose writers, Rolf Dieter Brinkmann, the German poet perhaps most immediately influenced by New York School poets such as Frank O’Hara and John Ashbery. Terrill’s reading and life experience have richly informed his writing.

Great Balls of Doubt is a rollicking, intimately considered poetry collection with all the epiphanies, doubts and disruptions of life. Jon Langford’s obsessively spontaneous, illuminating drawings complement the texts with refreshing aplomb. Mark Terrill’s characteristically charming, masterful, workaday, transcendental lyric poetry is both immediate and complex, informed by writers and thinkers of north, south, east, west. And it’s more compelling than ever. I keep reading this book.