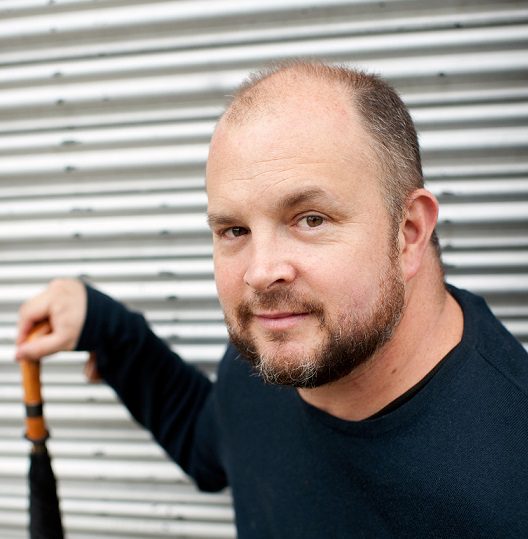 On Metro North, city-bound, the Hudson
unspooling. The surface is glassy and then sometimes

it ripples, says my ten-year old, Camilla,
as if she’s describing the python-like body of Time

slithering through our fingers. We get a text:
Julia, her basketball-playing babysitter, needs

ligament surgery. The train releases us
from its long, thin body. Three years from now,

Camilla, in puberty’s funhouse, might mandate
ten yards of distance from my body in public,

so I’m trying to drink in the closeness now,
tugging her by the hand through mid-day Manhattan,

Let’s light a candle for Julia, Christine says matter-of-factly,
darting into a side door of Saint Pat’s. I expect

a couple tourists, two minutes max, but a service
is mid-bloom, hundreds in the pews. We slide in

to show Camilla how God works. A robed man
sings at a lectern, his voice—a butter knife

scraping fibula. Christine leafs through the prayer book.
My eyes go up and up to the chiseled ceiling.

The robed man’s voice solves every crevice.
And I’m not religious and have no idea

what he’s saying, but something happens
on this unnaturally hot autumn day. I don’t have to hold

my face together anymore. This is a place
where you can let your face go.

And here it goes God, take Jamie’s slumped body
from the sidewalk, blood seeping from his abdomen,

like whisky from a paper cup. Take my mother
and her wheelchair, and the six-year-old girl

behind her seventy-eight-year-old face. And take Julia’s knee,
and my brother whose mind is elasticating

in two directions, like that Stretch Armstrong doll
we had as kids—how we pulled and pulled

to make him rip, but he wouldn’t, so we jabbed
a screwdriver into his ribs, the purple Gelatin

oozing out, the purple Gelatin in my brother’s brain,
but I don’t have to be strong now. All of New York

felt like this in the first weeks after 9/11, people
sobbing in cafes, the fronts of fire stations

transformed into open-air flower shops, the clenched
expressions of the homeless suddenly apropos.

and that was a homemade Eucharist. Bless the red-light
camera that took a little bite of my soul. Bless

the tooth dead in my mouth. Bless the bulb
dead in its socket. Bless my father

almost six months in the Earth. Bless the lungs
of the holy man singing. Bless this body

that has another thirty thousand miles left
according to the doctor, aka the mechanic of the flesh.

The day started like any other: a VW Bug
with a deer-crunched fender, followed by a flipped Volvo

flat-bedded back from the desert, then a two-Heineken lunch
and a RAV 4 with dings on three panels. There was some pot

in the happy hour parking lot, a sunset that looked like
listening to Joy Division in a bathtub, as a trio of birds

circled the pink sky like a dog chopped into parts,
Damien Hirst-style, but still alive and chasing its tail.

Back in the bar, I overheard a snippet of a couple’s argument,
and was lit just enough to stick my snout in and tell them

who was at fault. You see a car on its side and blood
on the pavement. I see the penmanship of the Lord,

the seeds of negligence in the drip, drip of an oil leak.
A mere glance at a skid mark and I can hear the brakes howl,

feel the car’s left wheels rising from the pavement,
a stream of vowels spurting from the sunroof’s mouth.

JEFFREY MCDANIEL is the author of six collections of poetry. His newest book, Holiday in the Islands of Grief, is forthcoming from the University of Pittsburgh Press in March, 2020. One of the poems from that collection was featured in Best American Poetry 2019. He teaches at Sarah Lawrence College and lives in the Hudson Valley.