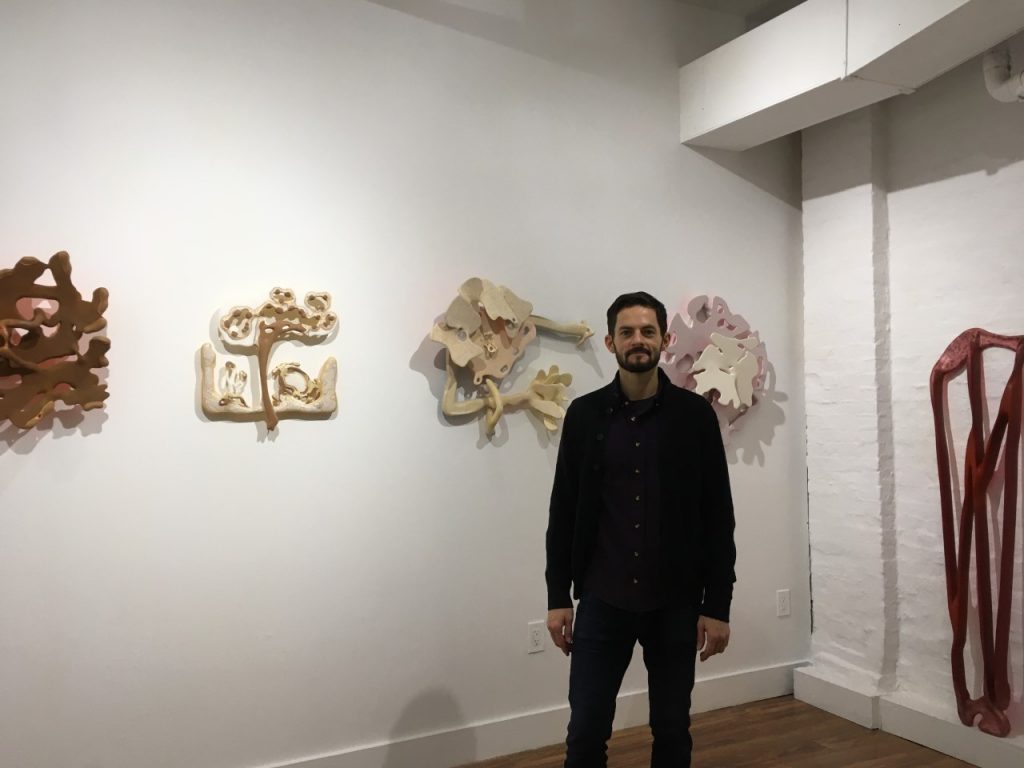 Nature and nurture, nebulous forces that shape us. Christopher Fahey’s biomorphic sculptures are hard and soft at once, angular yet rounded, smooth with sharp edges. They actualize longing, attention, craft and care in three dimensions.

In conversation, Fahey articulates a concept of “vivified form,” adding  “Fear and Anxiety giving cause to Secrecy is a big one.”

The artist continues: “When any form is nurtured, the wake of that treatment is readily apparent to our senses. I attempt to harness this energy of nurturing through patience and nuance — that energy being as much of a height to be reached in process as it is to be contained in the end result.”

“In working, I am heavily influenced by the vacillation of my memory and emotions. Somewhere in between my attraction to combining hard-edge materials and the work of shaping them into rounded ones, amidst the meticulous layering of glue and paint, exists my contentious childhood, the artists I enjoy, various traumas, the tenuous safety of secrets, and a considerable emotional void that propels me to continue working in and around this theme of nurturing.”

Born in 1983 in New Jersey, Fahey received a BFA from Pratt Institute in 2011 and his BA in English from Providence College in 2005. While at Pratt, he participated in a one-to-one exchange program and attended Musashino Arts University in Tokyo, Japan. In between these two collegiate experiences, he spent several months traveling through different European cities, visiting museums and developing his traditional painting and drawing skills.

Fahey has exhibited his work in various group shows and pop-ups in New York since 2011, but Nurtured Forms is his first solo show. His professional work experience as a conservation and museum technician have contributed to his inspiration and creative self-awareness through the daily hands-on exposure to art history. His three-dimensional works have been the result of his labor-intensive studio life from late 2011 to present.

Sculptor Louise Bourgeois — one clear influence for Fahey — has said: “An artist can show things that other people are terrified of expressing.” This certainly applies to the sculptures in this show. They nurture trauma into art, expressing and representing a rich, sometimes frightening inner world.

Each sculpture in Nurtured Forms is alluringly complex, the physical manifestation of emotions and memories guided by the artist’s hand. Exhibiting these pieces, Fahey passes on the responsibility of nurturing to the viewer’s caressing eyes.