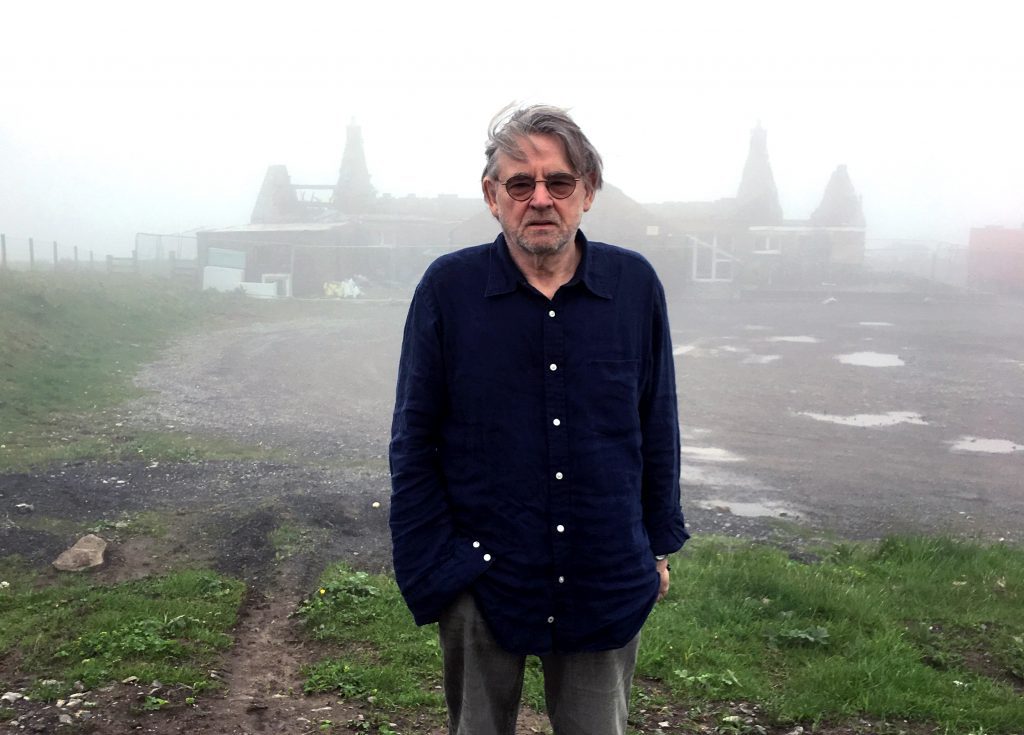 An Atlantic rage gathered a mass last night and unleashed a snarling sea-saga over the icy roof.

nowt took off
unless taken

sharp as a falcon’s beak
through a lark’s heart

this come-to-kill wind
rips at the hinges

While walking home from the icy wind ravaged Fiends Fell—wearing Klondike-ready long-johns, two pair of trousers, vest, shirt, sweater, waistcoat and two overcoats—beneath a low roof of black clouds from which a slow sun slid into view, I thought; If I am to write this book I ought to be kind to myself. And if that space needing protection and nourishment can be found, step into it.

The last image imprinted on my memory of Basil Bunting was when he flicked a cigarette-end into a roaky night from his doorstep that backed onto a pub car park in the foothills of the Northumbrian Cheviots. The sparks spat across the tarmac as a car drove past printing his shadow on the backlit fog.

“Be kind” later made me think of Allen Ginsberg’s poem Who Be Kind To which I always found heart healing. He was composing it during a trip to the UK in 1965 and read what he had to hand in Newcastle at the Morden Tower, then, a few weeks later, a more extended version in London at the Albert Hall gig. It was moving to hear and I’m glad it’s echoed down the years so comfortably, at least to me. Ginsberg sometimes had the ability to make the moment tremble with compassion. A leaf in a tender breeze.

In Alston I met Colin Simms talking to a tramp who sells pamphlets about his travels, much in the tradition of WH Davis whose Memories of a Super Tramp I remember reading with great enthusiasm as a child, and may have taken that route had I not met Basil who hiked a more difficult track. When I drove Colin back to Garigill, we took a walk up the South Tyne valley towards Tyne Head, keeping an eye open for hawks and following the route he and MacDiarmid had taken in search of a rare thistle after a session in the local pub several years earlier. He showed me the spot where, when he brought the Scotsman to a halt to point out a rare lizard on the dry stone wall, MacDiarmid whipped out his whistle to piss. Simms’s first book was Lives of British Lizards, and he’d been keeping an eye on the rare and shy ones he’d discovered living in the dry stone dyke where the great Scottish poet emptied his bladder. A drunk man pisses on a thistle.

There is now a wooden seat, where the poet pissed, for the repose of those who wish to enjoy the view—donated, unknowingly, by local dignitaries.

A comforting wind from the west was blowing last night so I left the window open before sleeping but the force of an icy blow-torch woke me about 2am with a frozen back. Dreams thereafter were discomforting and the gale unrelenting

so goes the vote

casper david friedrich and pork pies
link in a landscape, flaking in the foreground
centre left of frame

he joined the new party because
the armbands matched the anger
inside his angora suit, but

The telephone is down again but it’s a bright beautiful day.
Maggie brought a fried egg sandwich and said ‘just shout through when you want your dinner’.
Later I walked up to Black Fell and sat by a pool of peat water, leaning against the dividing dyke listening to frogs, revving up like bikers at the back at the café. Wind gasps between gaps in the dyke, a skylark singing occasionally and the call of a distant peregrine.

TOM PICKARD’s last two books were Fiends Fell (Flood Editions), and Winter Migrants (Carcanet). He presently lives in the north of England. As well as writing poetry and libretti he has published books of oral history and directed and produced documentaries for TV and radio on shipbuilding, poetry, and the resistance to monetarists mobsters. He is presently working on the second volume of Fiends Fell — from which the above excerpt is taken — rounding out the year, perhaps renewing the cycle.