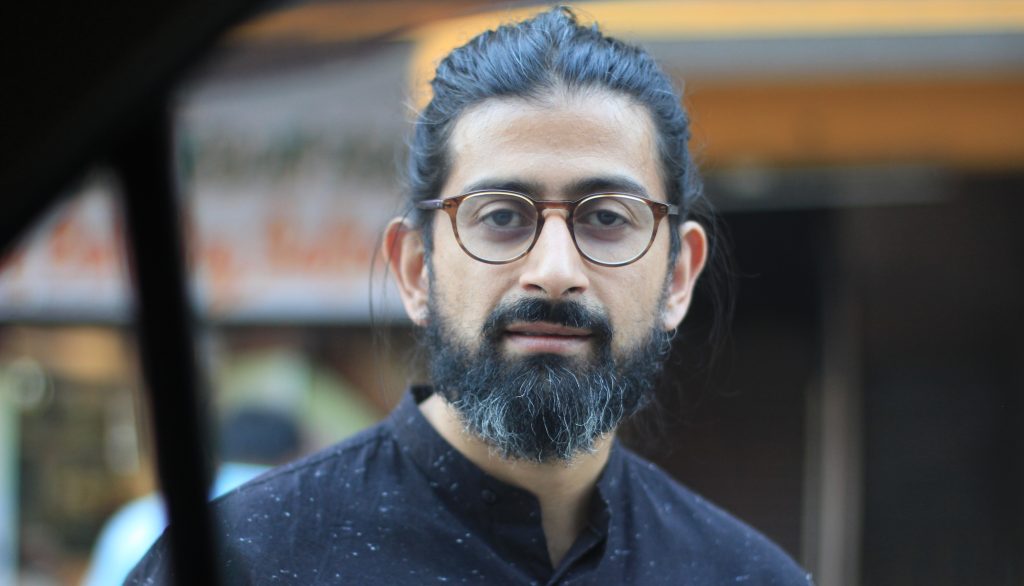 In this case, it was not the clothes that were made to fit her body but rather her body had to be trimmed and in some cases, cut off to make sure the clothing fit.

In the spring, she often arrives wearing a sweater that makes her look pregnant. On the waist it appears that she, herself, has stitched on two circular leather pads, vaguely reminiscent of a womb.

She would spend most of her days unemployed, idle and would worry about falling sick again. As a result, she started ironing her clothes obsessively, believing somewhere that there may well arrive an age when our clothes will replace our bodies, a time when by merely ironing out a crease on a blouse, one would be able to cure cancer of the breasts, or by a simple fold inhibit bacteria and other illnesses from spreading.

If she were to write her own biography, it would be filled with endless dresses but unlike other dresses of the time, her dresses would be made to unfold in ways that went against the folds of her flesh. A blemish or stain that surfaced on the cloth would emerge from some deeper inner wound, like acne on skin, and unlike all those starved torn jeans, those tight tubercular pink shirts most women her age wore, her flowing dresses hanging on the clothes-line would blow gently in the breeze.

Unlike other dresses of the time, some of which were cylindrical graves to house a corpse, this dress clung to the contours of her body and all the folds and pleats, like the edges of the body, allowed for her clothes to be enjoyed as flesh.

It took only a single sharp cut with a scissor to dispel all air of mystery. The cloth, lying crushed for many years in a cupboard, would in one fell swoop cease to remember. The only way to avoid this would be to either fold in the undesired cloth, rendering it invisible or to soften the scissor with yarn.

Sick of all those tight, slim fitted clothing, even small people have begun to wear shirts and trousers fit for giants, as some sort of game.

The dress, unlike most we know, did not fold outwards and therefore lacked an aura. One could never have really been certain whether it might have folded so far in, so much so as to render an unfolding body of the same cloth.

Only at the time of extreme grief of having lost a loved one, were we permitted to unleash our sorrow by tearing our clothes. If we lacked the strength to do so, we were permitted to use scissors, only if scissors were at our disposal at that given moment of grief; using them would not have been permitted even a moment later, should the grief have disappeared. Children, especially of the female sex, were however, not encouraged to tear their own clothes even if they possessed the strength. A mere cut in the cloth, like that of a small blouse that was not visible to the public eye would have sufficed.

Instead of undressing, she donned twenty pairs of underwear and multiple bras, a bodice, making it impossible to breathe.

Her dress was a trap that folded only inward. In fact, there was no window that looked out.

The children who drowned in the lake that day left all their clothes piled up on a grassy patch.

As a young boy he had hated his sister so much that he spent one afternoon while she was away at ballet class cutting up her dresses with a small pair of scissors.

She grew up looking at her obese mother and aunts and even though she is, in fact, exceedingly thin, she insists on leaving a t-shirt on while in a public swimming pool, supposedly in order to conceal her small teenage breasts from the stares of disgusting men, but be that as it may, the wet t-shirt weighs her down, threatening to drown her

All the clothes that we would ever make would always be stitched from clothes we already owned, clothes that were either growing old, or had never been worn.

The woolen coat that he wore was stripped of that lamb outside his apartment that he used to often see grazing in those rugged fields outside.

During those war days we were always in each others’ clothes and linens, for all the clothing stores had been raided and some even bombed.

The entire outfit was complex, as it was composed of various yarns and fabric of multiple colors, not to mention buttons, sashes and zips that kept it taut, all together. The entire outfit was complete in its multiply distinct parts, and apart from a hanging necktie–the sign of a dead man– each article of clothing played its necessary part in finishing off the whole dress, so much so that neither body nor mannequin was needed.

GAURAV MONGA is a writer originally from New Delhi. He learned German to read the works of Franz Kafka and Robert Walser. He writes prose poetry and short fiction, much of which has appeared in literary magazines such as the Fanzine, Juked, Birkensnake, The Fabulist, among others. He has written a collection of prose poems published by Desirepaths Publishers, entitled Ruins. A collection of short stories, Family Matters, is published by Eibonvale Press. He has taught literature, German and creative writing at schools and colleges in India, Nepal, Switzerland and the Czech Republic. He is fascinated with the relationship between fashion and literature and is currently working on a poetry collection about clothes.