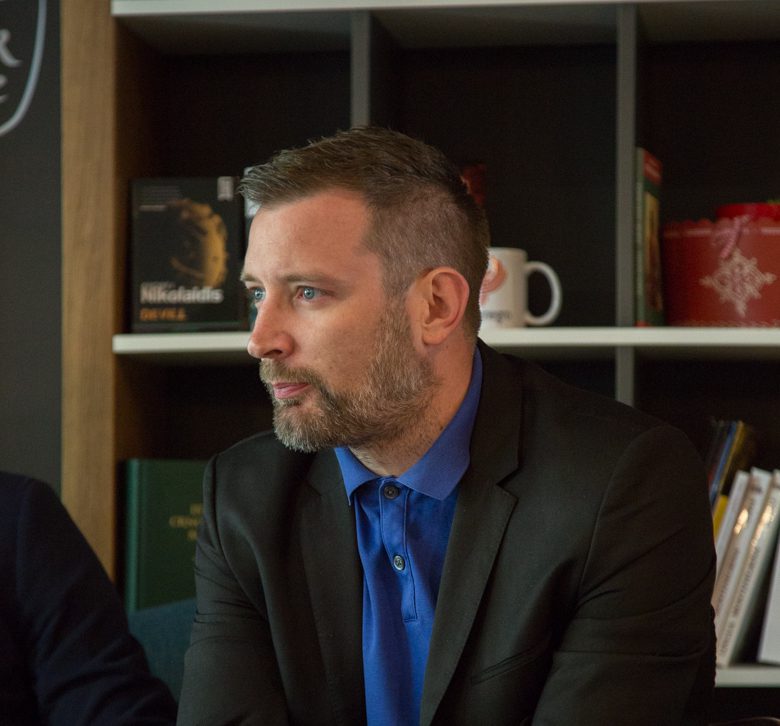 The two of you stand in front of the fitting room, he has a pair of trousers in each hand and raises and lowers them in turn.

You: “Make up your mind. You look like a scarecrow that’s come to life, a battery-operated one at best…”

He interrupts you and warns you with a glance. He’s offended for a moment. You both act confused and scared, look around, shoppers periodically circulate and surround you for a few seconds like some popular island before disappearing into other fitting rooms. You keep Fitting Room no. 5 occupied although you’re having your dispute in front of it. Girls come out and send you indifferent glances as they walk past.

You: “The beige ones are too wide in the waist and flare in the legs. I know you once went in for bell-bottoms, but today they’re a disastrophe.”

One of the girls comes back to a fitting room looking all screwed-up. Both of you have a clear picture that she’s forgotten something and won’t hang around for more than a few seconds.

You: “That’s not possible.”

The girl sends you one more glance as she departs. The tap-tapping of her high heels resounds until the euphoric mall music finally drowns it out.

You: “I’ve spent years on websites of fashion brands…”

You: “Dad, don’t underestimate me. I’m seriously into it, and a lot more honestly than your idiotic generation with its hippie shit.”

He looks around a few more times, purely as a precaution, although he’s sure you’re alone.

You don’t hang the trousers where they’re meant to be hung. You throw them over the door so that shoppers will realize Fitting Room no. 5 isn’t vacant. Neither of you are confused anymore. Or scared. His eyes flicker with a low flame and their reflection lights up the larger half of your young, masculine face. You’re cool-headed and, yes, sometimes you find it boring. He clumsily unbuttons his trousers and hauls it out. He tries to kiss you, but you don’t let him. Alright, he can smell your hair and go halfway down your neck. Far from gently, he presses his big nose against your part, from where he travels all over the surface of your head. He inhales the residual aromas of shampoos for boys and random fried meals from diners in malls—McDonald’s, Fish & Bar, Big Pizza, Foody, and the rest—he smells and quietly condemns the injustice of this consumerist age that tightens its noose around you, his boy, and wraps himself around you ever more firmly, squeezes your head to his body and sniffs at it forcefully. Blood rushes from his nose. You pull back with a gentle shudder and ask him with a slight tilt of your head if he’s OK. He’s not OK, but he nods that he is, wipes the blood away with his sleeve and gently presses you down on your knees. You follow his lead without hesitation and watch his eyes as you slide your nose along his sharp, taut cock. You open and close your mouth emptily like a fish. He whines and begs you to knead it and try to cram it into your mouth, as much of his meat as you can. You move it affectionately closer to your lips and speak swirls of unintelligible phrases. Then you give it a lick so you can more easily take it in as far as it will go. You don’t use hands—you’ve always thought it a technique for helpless amateurs. You try to calm his body with your fingers because he’ll come too quickly if he concentrates just on the blow job. He implores you to take your trousers off, but you won’t, you shake your head from left to right, push out with your tongue, and pull his cock in again as far as it goes. It’s long and irritates your throat, tears accumulate on your eyelashes, too many. You let them merge, and a shiver runs over you when you feel the cold of your closed eyelids.

A monstrous fear washes over you, brought on by abrupt thoughts about a seventeen-year-old in a mall fitting room sucking the cock of an aged maniac, who even calls him “son.” Pictures flash before your eyes from not-so-early childhood. You learned how to give the older boys head for a few cents. But you didn’t cry. The dicks were smaller and didn’t cause you to retch and almost choke. They looked more like the cheap toys that come as freebies when you buy a New Year’s Eve gift at a kiosk. As the years passed, more impressive cocks arrived. You slow your movements and focus on fast tonguework. He tries not to make a sound, but he does in the end. He leans over you and slips his hand into your trousers, he whimpers for your ass and in desperation offers to pay more. He doesn’t want to come just now, in that first stage. He rambles, he tries to stick a finger into you, but you artfully twist away. He wants to drill right through you, he feels he has to save you, to take you chaste before God, who’ll mend your weary wings.

His cock drops out of your mouth and bounces about like a goofy dolphin, bobbing gleefully above the dark tiles that scrape at your knees. You return it to your throat. Major tedium blanks your face, and a thread of saliva stretches down to your trouser leg. Your voice is out of action and will produce nothing more than guttural panting. You really want him to come now. You help him along by thrusting your fingers up his butt. He resists and groans, he holds your head in his hands as the rising sensation puckers the skin under his eyes and nose. You call him a Mastiff, and again. He likes that spur-of-the-moment nickname, evidently, because his grimaces become more expressive. An extravaganza of affectionate touches take place on top of your head as your mouth fills with gelatin.

He discharges without emotion. You move your head aside to keep the sperm in your mouth, afraid of swallowing it. He pulls his dick out self-confidently and he’s back to his old, other self. The disgust on your face markedly grows and you let the jizz dribble out onto the tiles. He looks at you vacantly, perhaps a little offended, while he buttons up his trousers. He counts out the money and leaves it on the chair. He exits without a word. You get up quite elastically, without using your hands, and stand as straight as a rod. You push several pieces of chewing gum into your mouth and with great effort turn them into a soft mush. You look like a fish again.

You leave Fitting Room no. 5 and drift tiredly down the dark corridor, and in your reflection you watch the shining of your shimmery scales beneath the dim gleam of the neon lights. A hazy sign high on the walls at the side leads you on toward the luxurious center. You travel like an illuminated commodity and leave an olfactory trail of synthetic orange behind you. The corridor is gone, you enter the polychromatic world of expensive fashion brands. You’re walking more nonchalantly now, and the quiet of the concentrated consumers instills a sense of security. Everyone is on the right path and scans the piece of clothing they want without excess glances. You go up to the shoe section. Nicholas Kirkwood shoes with their gallery of colors cast light on you from their high shelves. You lift up a golden pair and spread a smile, as much as the mouthful of chewed gum permits. You raise them to your face and try to get at least a hint of smell. You catch a glimpse of your eyes in the reflection on the tip of the shoes and watch those two flattened smileys that change shape with the next blink. You’ll soon be their owner, you quietly avow. Yes, you’ll continue the uncompromising fornication, licking of anuses, and swallowing of cum. Maybe someone will even want you for keeps. Someone rich. Then you could have a whole wardrobe of Kirkwood treasures. You’d just be silent and gaze at the gold. As you try to master your inner turmoil and mature in front of the opulent rows of your favorite brand, your tongue struggles with the mass of orange gum. It hollows it out and forms an inner arc, which you blow up. A balloon appears in front of your face and slowly grows toward your eyes. You don’t know what to do next. You stand there stiffly. Like a moron. With two skulls.

STEFAN BOŠKOVIĆ was born in 1983 in Podgorica, Montenegro. In 2010, he graduated in Drama from the Faculty of Dramatic Arts at the University of Montenegro in Cetinje.
As well as the book of short stories Transparentne životinje (Transparent Animals), Nova knjiga 2018, he has written a novel, Šamaranje (Slap in the Face), published in two editions in 2014. It was awarded the Prize for the Best Manuscript Novel in Montenegro earlier that year. In 2016, he won the second prize of the Festival of European Short Stories for “Fashion and Friends.” Various of his short stories have been published in English, German, Russian, and Slovenian.
Bošković has written the scripts for a feature-length film, several short films, a sitcom serial, and a large number of documentaries. Several of his short plays have been staged.

WILL FIRTH was born in 1965 in Newcastle, Australia. He studied German and Slavic languages in Canberra, Zagreb, and Moscow. Since 1991 he has been living in Berlin, Germany, where he works as a freelance translator of literature and the humanities. He translates from Russian, Macedonian, and all variants of Serbo-Croat. His best-received translations of recent years have been Robert Perišić’s Our Man in Iraq, Aleksandar Gatalica’s The Great War and Faruk Šehić’s Quiet Flows the Una. See www.willfirth.de.