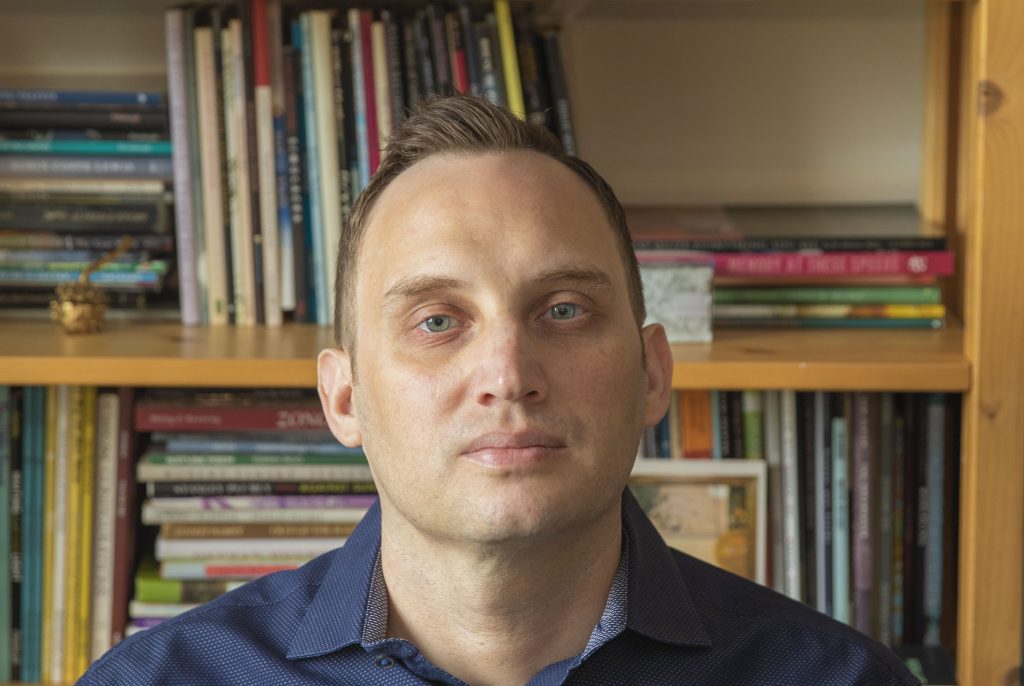 He places a pillow across my lap,
then let’s loose a joke about saving dignity.
He wants to check my scar, and the whole team
descends from their orbit to watch his cold hand
test a red line the length of my stomach
that closes where the stomach had been.
From their fingernail’s slice of cratered moon
they assemble the daily surgical theater
where I come and go, lifting and dropping my gown.
His fingers probe around the plate, reading auguries.
Then like a held breath retreating from stench,
the team deflates, the demonstration ended.
But today, there’s special providence:
the pathology drops like a winged thing
wounded. Like the one I’d found on the patio,
its feet still curled around some absent branch.
The sparrow had the look of a toppled-over
sleepwalker. My hand stuck in protective layers
of thin plastic grocery bags, I was afraid
that what I touched would spark, would wake and fly,
even though that’s what I should have wanted
for it. No readiness can cure that.

It’s the space between them we can count on,
more constant than the light we claim
our fortunes by, and because we’ve proved
this janky wooden plank in the argument
we can proceed another premise, one body’s-length
farther along the surface. You could bet
your hemlock on it, or the next timid step
across the fogged-up mirror of the iced-over lake.
The state is ill; therefore, I am ill.
Hippocrates thought of the crab
because of its legs reaching out like tendrils,
like gossip’s sideways whispering
through the crowd of swollen flesh.

Then leaving my surgeon’s office
I had to step over the splayed fingers
of a spidering slick of oil in the parking lot,
which I tried to read like the lines in my palm.
My dreams, too, have become nebulous,
intense, and frequent, and just after waking
they take on the blankness of the bayou’s face
when the stars black out behind clouds.
It’s like a joke from some low-grade
and obvious comedy—how do you not get
out of the way of an oncoming steamroller?

I am learning the difference between urgency
and importance. Although, they often meet
at the more accusatory places. To the monarch
butterfly breaking loose of her chrysalis,
the twitter of the state is urgent.
The icy-blue eye of the flipped-over iceberg
has been here long enough to know what’s important.
I place my hand against the window
and I’m met by the dark’s aged coolness.
The light passing through me in many strands
from the cluster of bees set in the night sky
happened so fast and so many years ago,
there wasn’t even a thought of me being born.

What should have been the vision
stretching before the curve?
What could I have done
for insight? It’s a tale
of dirt. Of things
unplanned for rising
from the stone planter.
I look in the mirror
and trace the scar—
a fallen shepherd’s crook,
a dropped question—
and my finger
makes a double seeing,
working along my skin.
What should the response have been?
Where does the fear fall
if the pit is pure
absence? I always suspected
intuition was the bowel’s game.
Feeling is a snake’s
skin, not a cup.
We danced in the living room
to Richie Havens’ “Follow,”
my eyes sloughing off
whatever self I had erected.
It was more like holding you
inside a tightening circle
while around us a circle moved.

PAUL OTREMBA is the author of three collections of poetry, Pax Americana, The Currency, and the forthcoming Levee, all from Four Way Books.