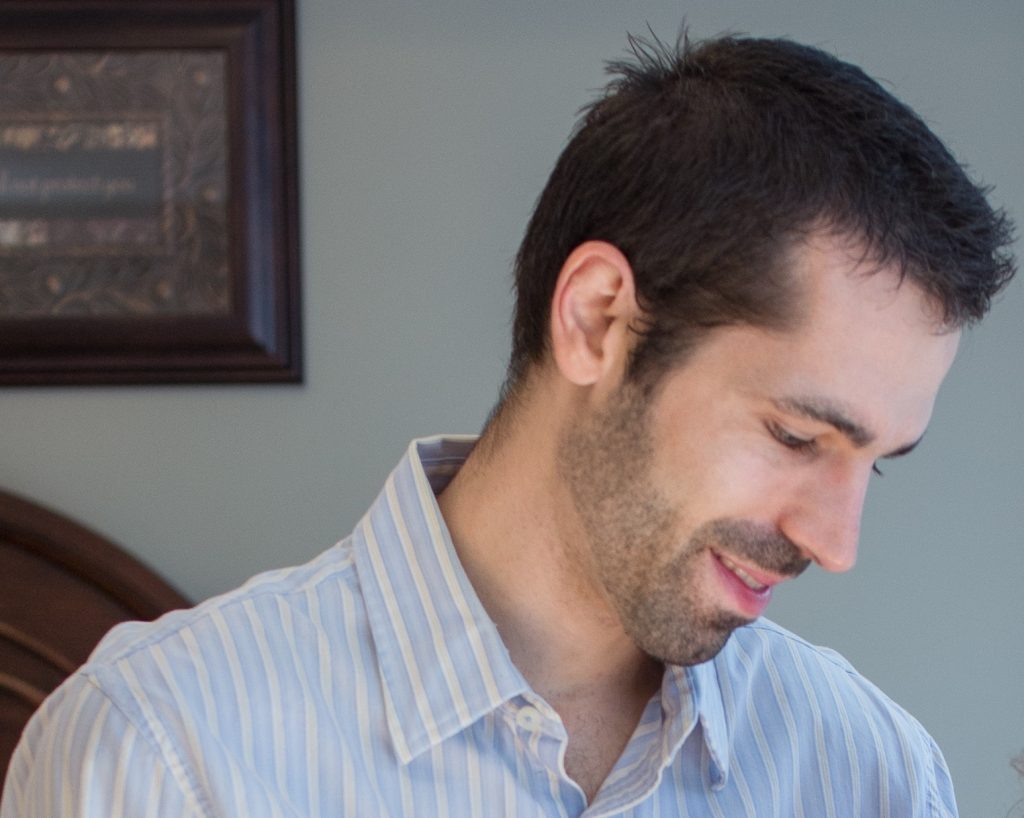 Samuel scanned the café, barely aware of its coffee aroma. His facial analysis software said everyone was full-bred white, straight, and gender normative, with generations of Baptist ancestry. They paid him no attention. His smartglass’s jamming program seemed to be working on their smartglasses as well as it had worked on the HR bot who gave his exam earlier.

He removed his glasses and let them dangle from the corpus callosum connecting cable, or 4C, while he rubbed his eyes. Then he looked at the menu, and its stark words and numbers made his chest tighten and his breath shorten. Samuel put his glasses back on and immediately relaxed and breathed easier. He reached toward the augmented menu and pulled a 3D image of a salted caramel frappuccino from the air. He guzzled the digital frappe until the sample timed out and evaporated in his hand pixel by pixel.

The barista welcomed him with text and a very human-like voice. “Hello, I’m Sally. Please order when ready.” He tapped the coffee image, then “Tall,” then one cream, one sugar, and finally “Pay-with-Chip.” Slowly, he passed his wrist across the barista. It deducted all but thirty-eight cents from his checking account. Sam felt he should have panicked, but that was all he allowed himself to feel about it. He assured himself he had passed the Baptist Faith and Doctrine Exam and would get an interview in a few days.

The other barista, a young redheaded girl covered with freckles, moved from machine to machine, pressing buttons, dumping ingredients, assembling drinks. Sam wondered if she had freckles under her bulbous glasses. He shook his head, recalling the days when companies tried to build the smallest interface. Now each day more and more people looked like bugs.

An ad popped up above the girl’s head, and Samuel’s heart dropped. Even if he passed the exam, got an interview, and his jamming software held up, his smartglasses couldn’t compete with a barista’s.

She owned a pair of wireless glasses powered by a decacore, 12-terabyte CPU with neural-networked AI and a lifetime subscription to Google’s premium augmented reality and analytics streaming, with quaint unlimited cloud storage thrown in. Lowest offer on Amazon: $638,499.

What chance did Sam have with his old-fashioned wired glasses? If AI could laugh, surely the HR bot cackled after he left. Office manager? He should’ve invested in an exoskeleton, maybe he could’ve washed dishes. If only his parents could’ve afforded genetic modification. Maybe if ….

“Tall coffee,” the girl said flatly. No one smiled anymore. No one paid attention to smiles. He came forward, but she stayed put. A green light flashed in the corner of her glasses, analyzing data and relaying the results to her prefrontal cortex. Sam froze.

“Who asked for John the Baptist’s head?”

Sam wanted to run. How could she have known? His jamming program was running. Just how good were her glasses?

He sensed everyone turning toward him and glaring. Heat rushed up his neck and into his face, and he worried about sweating through his makeup.

His glasses flashed a blood pressure alert, and he fought to appear calm. “Salome. Or Herodias, depending on one’s interpretation.”

“Kinda slow. Did you google it?”

“Which is the final arbiter of truth: creeds, confession, or the bible?”

“The bible. Of course.” He smiled weakly.

“When does the Holy Spirit baptize every believer into the body of Christ?”

“When the believer is immersed.”

She scowled. “Sorry, but I can’t serve you. Try east of Sunshine.”

“Google it later.” She turned back to her work, coffee in hand.

“No, no, that was a trick question, of course it’s the moment of regeneration.”

She called over her shoulder, “Google it later, not now.”

“That was a trick question.”

“Ask me something else.”

“Sir, stop infringing on my freedom, or I’ll call the police.”

“You heard her, buddy,” a man said, rising from his seat. His parents had spared no expense; his genetic modifications were impressive even by today’s standards.

Samuel flung his glasses so hard, the 4C snapped them back against his chest. “Look at me, I can’t google now, ask me something else.”

“Get lost,” the man said. A small, black barrel peeked over his shoulder with a low whir. Genetic modification and an exoskeleton. How rich was he? Or was he a cop? Sam dabbed his sweaty forehead; if his makeup ran and he didn’t play things just right, he could get shot. He considered apologizing and leaving, slowly, but word would spread, everyone on this side of town would know he wasn’t Baptist, he’d never get a job, he’d never pay off his smartglasses.

The barista waved off the man, turned to Sam, and put a hand on her hip. The green light pulsed in her glasses. Sam felt everyone staring with a certain glee, the GM man poised to drag him outside or worse.

Six seconds later, she smiled and asked, “How do we know there’s a God?”

The mood shifted in the café. The Baptists themselves weren’t sure what answer she expected.

In no hurry, he shrugged and recited, “The light of nature in man, and the works of God, plainly declare that there is a God.”

The girl flinched in surprise. “Wow, so sorry,” she said, coming forward with his coffee. “I thought you were Methodist and effeminate to boot. Guess I gotta upgrade my FAS.”

Sam could only nod.

“Can’t blame me, though. Start serving non-Baptists, then you’ll have immigrants!” She laughed at the absurdity. The GM man smiled and shook his head, his weapon whirring back into place while he sat down. Everyone else chuckled as they returned to their smartglasses, their drinks, or, rarely, each other.

Sam felt so exhausted, so absurd, walking outside. He sat at an outdoor table and watched traffic. Eventually he sipped the cooling coffee. Not nearly as good as the simulated frappe.

Staring into the patio’s concrete, he tried to imagine another world but couldn’t. A little traveling through Wikipedia taught him that things had once been better and had once been worse, leaving him indifferent to a state he hadn’t created and couldn’t control. The mere idea weighed him down, slouched him deep into his seat.

The coffee had gone cold when Sam made a snap-decision. He made sure no one was watching, took a compact mirror out of his pocket, and quickly checked his makeup. Then he pocketed the mirror.

Sam went inside, grasped another frappe’s 3D image, and tilted it toward his mouth. Better. Much better.

ERIC SENTELL teaches writing at Southeast Missouri State University. His fiction has appeared in Long Story Short, Moon City Review, Unlikely Stories 2.0, Blink Ink Online, SFD: Short, Fast, and Deadly, Shout Out UK, The Penmen Review, B O D Y, The Bookends Review, and other online journals. In September 2010, Long Story Short selected “Stolen Thunder” as its Story of the Month. He has published many essays at Role Reboot and The Good Men Project, and he is currently writing a novel. Follow him @ericsentell or ericsentell.wordpress.com.