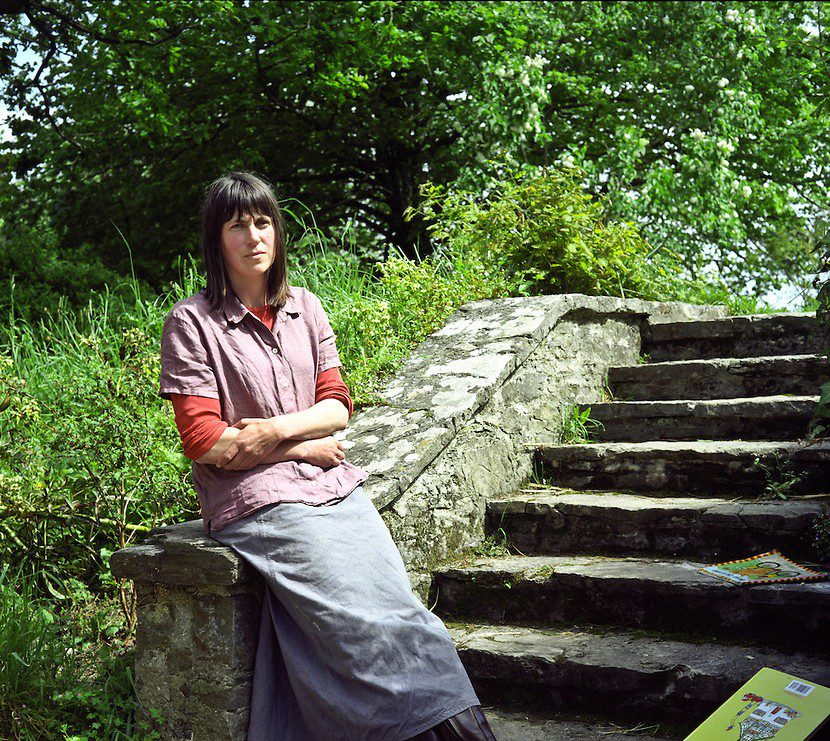 Alice Oswald, one of Britain’s most celebrated poets and an eminent contributor to the aubade tradition, has recently recounted the experience that led her to become a poet. As an eight-year-old, she once spent a sleepless night in an unfamiliar, “scary room.” When dawn finally came, she realised she could not describe her relief and amazement “in other than in a different language.” Her poetry stems from that moment of apprehension. It is a sustained attempt to find ways of communicating experiences and encounters that do not lend themselves easily to language. The poet’s latest collection, Falling Awake, is the most explicit re-enactment of that formative memory.

Oswald, who read Classics at Oxford and has worked as a gardener, writes poetry that combines a fascination with traditions of the distant past with a genuine interest in digging beneath the surface of all things to find layers that beg to be translated into words. Her previous book, Memorial (2011), consisted of a series of linked poems based on Homer and subtitled “An Excavation of the Illiad.” Indeed, homage and retrospection inform much of Oswald’s work, be they tributes to minor characters killed off by an ancient poet, a landscape in flux, or an animal glimpsed passing by.

The air of transience and lasting impression is especially marked in poems with images of streaming water. Oswald’s second collection, the T.S. Eliot Prize-winning Dart (2002), offered a succession of “conversations” between the river Dart in Devon and the people whose lives are connected with its flow. But rivers and streams abound in other works, too, in which the poet blends in with the scenery and her characters, including the water with its sinister currents and depths and its life-giving generosity. The river with its mouths and sources imaged as a figurative stream of voices is emblematic of Oswald’s insistence on the orality of her medium and her inclination for ancient ways unencumbered by “the dead page between you and the world.”

Each of these intimate encounters with a fluvial landscape is both physical and mythological. They testify to an enthrallment with “the way the death of one thing becomes the life on another,” chronicling, for example, the rotation of seasonal smells with their varying admixtures of sharp freshness and decay. Oswald places in seeming apposition the swift, unswerving flow of life – “all that dazzling stubbornness / of keeping to its clock” (“Cold Streak”) – with its undercurrent of muddy confusion and erosion:

. . . this weephole
where you can taste
almost
not water exactly. (“A Drink from Cranmere Pool”)

In “Severed Head Floating Downriver,” one of the most engrossing poems in Falling Awake, the severed head of Orpheus, torn off by the Maenads, is pictured bobbing in a stream as it floats away from the tragedy and pleasures of life, forgetting itself and losing its grip on language. The expanding white space between the lines and paragraphs indicates broken speech, until in the end the narrative is taken over by the author speaking in her own voice. As in many of Oswald’s poems, the cessation of one voice becomes the source of another.

It is at the moment of its disappearance that a thing is most appreciated or finally seen at all. Lament and celebration interweaving in the endless cycle of loss and renewal are the governing principles in Oswald’s poetry. Yet, Falling Awake systematically shows how cyclicality and repetition are not always marks of the mundane. On the contrary, they are worth recording precisely for the way they entail astonishment.

The poem towards which the entire collection builds is “Tithonus,” a long narrative poem subtitled “46 Minutes in the Life of the Dawn,” the exact period of time in which night turns into day at midsummer. For the duration of the poem, the page numbers disappear, suggesting a suspension of time itself. But this impression of a pause in time is checked by a vertical dotted line that runs continuously along the left-hand margin, with 2,760 dots to mark the number of seconds to the 46 minutes of the dawn and to measure the silences between words.

The poem’s narrative, which is primarily meant to be heard, concerns the mythical Tithonus whom Eos, goddess of the dawn, loved so much that she asked Zeus to make him immortal – but failed to demand that he remain young. A frail and barely conscious Tithonus comes round every morning to meet dawn, babbling to himself about what he has seen so many times before. His obvious dependence on the recurrence of things brings repetition to the point of absurdity: in the light of eternity the distinction between progression and pause loses relevance:

two sounds you can hear at this
tucked-up hour
when a man rolls over and pulls
his grief to his chin and his feet have
no covers
first this: the sound of everything
repeating

then this: the sound of everything
repeating.

which is a wall of green

Tithonus’s halting speech allows the poet to inhabit the scene with her own consciousness. But if Tithonus is a metaphor – a mask –, the poet does not hide behind the classical anti-hero’s gaze. Instead, she uses the myth to grasp the scenery that she sees with her own eyes, locating within its vocabulary the eternal qualities of the elusive moment she sets out to record.

Moreover, what starts as a dramatic monologue turns into a polyphonous diversity of voices with whom the poet alternately converses and identifies. Commenting on the object of Tithonus’s infatuation, Oswald shows how thought and perception work: “she never quite completes her / sentence but is always almost.” This state of “not knowing / but almost” exemplifies what Oswald attempts to do with her poetry: give shape through words to the sense of almost being there, which for her amounts to being alive; that sense of possibility materialized in the “moisture on leaves [that] is quick to throw glances.” (“Tithonus”)

The opening poem in Falling Awake, “A Short Story of Falling,” conspicuous in its metrical regularity, rolls out as an unfinished, circular sentence in ten rhymed couplets. But if its incantatory simplicity makes the poem sit uneasily with the rest of the book, it functions as a true preface, a prologos that introduces the many voices and narratives that follow it. Falling Awake is told in the manner of “the story of the falling rain / to turn into a leaf and fall again.” Like accumulating water, poetic utterances issue from a point of utmost fullness and just as quickly disappear:

A keen storyteller, Oswald names patience as the fundamental skill necessary for poetry. She has repeatedly objected to being labelled a “nature poet”, or worse, a “pastoral” poet, and has dismissed such categorization as an “urban approach.” For Oswald, the distinction between nature and civilization is pointless. The stuff of her poetry is the world around us. Its ongoing ambition is to explore the anatomy of the perceiving mind and its capacity for concentration. Patiently peeling off the “animal” and “vegetable” upper layers of consciousness where “it’s all quite named,” she reaches the “mineral” layer which is the core of concentration. From there “you can respond to the non-human by half turning into it,” she explains. It is in this respect – rather than simply on account of the many rooks, flies, and foxes that appear in her poems – that Oswald can be seen as an heir to Ted Hughes, who likewise claimed that in poetry “you have to turn yourself into it.” But while Hughes’s grim ventures into the animal world foreground the beholder’s perspective, Oswald focuses on the crossings between the imagining mind and the exterior of the perceiving body. Finding herself almost transformed into the non-human she meditates on the thin line between life and death.

The body itself is a potent source of images for illustrating the paradoxicality of life. In its mortality, the body is repeatedly portrayed as dead matter – a grave or coffin attached to consciousness – to which living things nevertheless cling since it is only through the body that they inhabit this world.

A rotted swan
is hurrying away from the plane-crash mess of her wings
one here
one there
. . .

The density and explicitness with which bodies populate Oswald’s lyrics make for philosophically interesting reflections on bodily experience and the unity of the senses. Her sensory grasp of the world invariably involves a combination of senses and manifests how sensation is our most direct communication with the world. “Shadow” offers a masterful meditation on the physicality of an optical phenomenon:

look when I walk
it’s like a pair of scissors thrown at me by the sun
so that now as if my skin were not quite tucked in
I am cold cold
trying to slide myself out of my own shade
but hour by hour more shade leaks out.

Poetry, with its techniques of synaesthesia, simultaneity, ellipsis, and compression, is a prime tool for achieving the closest possible communion with the world. Offering a kind of a fluid “sixth sense,” it consistently undermines the customary categorization of the five senses and shows it as misleading or even preposterous. In Oswald’s work, this “sixth sense” of poetry is reified by the immediacy of images enhanced by the dynamics of sound. Her verse is based on a continuous play between landscape and language. It inhabits that foggy zone between interiority and exteriority where the body and mind, sensation and perception, meet. Indeed, the sheer physicality of her vocabulary, enhanced by her use of rhythm and assonance, allows her reader not only to “see” each object but feel it with one’s whole being, even almost “be it.” Accordingly, the setting in these poems is no mere backdrop to human drama, but something that both pertains and exceeds it:

now a snail the speechless tongue
of one who is introverted and clings
to leaves
pokes out of sleep too feelingly
as if a heart had been tinned and
opened. (“Tithonus”)

The last quoted passage, with its conceptually and sonically interconnected images, is representative of many such moments in Oswald’s poetry. It exemplifies the smooth, slick, and significant interplay of rhythm and sound that is typical of Oswald’s writing, but has been brought to perfection in Falling Awake. This close bond between meaning and the phonic quality of words, each chosen for their capacity to bring us in touch with our surroundings and feelings, is perhaps the defining characteristic of great lyric poetry.

DANIELA THEINOVÁ is a critic and translator. She has translated from both English and Irish into Czech, including novels by Colm Tóibín, Kate Atkinson, and Marilynne Robinson, and poetry by Vona Groarke, Alice Oswald, Máirtín Ó Direáin, and Nuala Ní Dhomhnaill. Her articles have appeared, for example, in Post-Ireland? Essays on Contemporary Irish Poetry and various Czech literary journals.