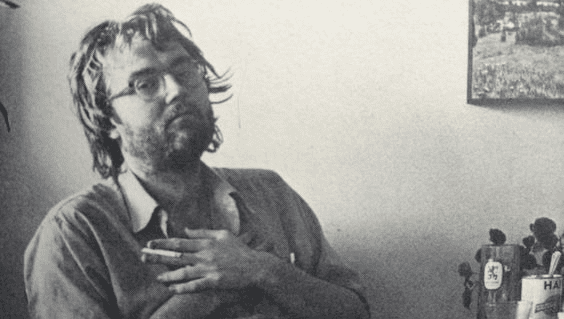 I DIDN’T KNOW the late Bill Knott very well. By the time I arrived in Boston in 1987, Bill was firmly ensconced by his lonesome at the back of the room during readings at the Blacksmith House or the Grolier—nose down in a book, wearing his chunky black glasses (their stems frequently taped up in repair), he radiated a very definite “approach me not” vibe. I would have liked to tell him how much his poems meant to me—but I’d heard the stories, and stared forewarned from the edges of what I imagined to be his swirling inner galaxy. I kept my distance. I was shier then, and I understood that there were some rare poets in this world who neither needed to hear nor enjoyed hearing about your estimation of their genius. Alan Dugan—who I’d recently spent some time around—was another of these. At the time it seemed a little graceless; thirty years later it occurs to me that it might be a sign of saintliness.

Since I’m on the subject of Bill’s “eccentricities” — which others have called either “self-destructive” or “self-sabotaging”—I’m inclined to agree with Tom Lux when he offers up a big, fat “so what!?” in his introduction to Knott’s recently published selected poems, I Am Flying into Myself. I like to remind myself, it’s the poems, stupid. I am interested, however, in Bill’s odd position in American poetry over the last fifty years. There is a second-tier song by Bob Dylan about the “sensitive mobster boss” Joey Gallo, in which Dylan describes Gallo as “always on the outside of whatever side there was.” The phrase might have been emblazoned on Bill’s t-shirt as well. What’s implied in the stance is integrity, no matter its possible origins in personal pathology. Integrity, and its synonym: antagonism to the institution. Any institution.

Perhaps this anecdote will illustrate: in the late 90’s, a dozen or so Boston area poets read at Harvard to celebrate the 60th anniversary of the Academy of American Poets. We were each asked to read a poem written by one of the dead chancellors of the Academy, and then one of our own. After some welcoming remarks by Stratis Haviaris, an English department luminary got up to offer an introduction. Let’s just say it was long, lugubrious and self-satisfied. Bill sat slouched in the front row, simmering, the only poet in the front row, his hands welded together at the fingertips and positioned in front of his face. He sat locked in that prayerful pose while the rest of us read. His moment arrived at last, after launching upright with a jerk, he literally trotted up to the stage, then speed-read Pound’s “In a Station of the Metro,” and blasted through a two or three line poem of his own, titled “Bill Knott,” before looking up and saying, in a sing-song, half-snarl, “So long, you tweedy birds.” Thereupon he trotted off the stage, and out the door of the auditorium.

What I want to say now is this: Bill Knott’s poems were a perpetual rebuke to whatever period style happened to be dominant over the length of his career. That was true even of his first book The Naomi Poems: Corpse & Beans. Tom Lux makes the important point that in the context of the prevailing mainstream modes of 1968, Deep Image and Neo-surrealism, “there was nothing neo” at all about Bill’s surrealism—its “blunt force” (as Lux puts it) seems less about style than character of mind. By contrast, much of the writing of that time seems affected and posturing. Knott seems to have meant all of it, down to the last syllable.

Even then, in that first book, Knott’s poems were made out of complex sources. Sure, the surrealism of his beloved Robert Desnos and Cesar Vallejo, but a surrealism inflected by a Catullan sense of the satiric and mitigated by a kind of poignant lyricism that in certain moments Sappho might recognize. Right from the start, Knott’s veering intensity and his rich tonal stew made for a poetry beyond all familiar categories, outside the conventional approaches of both sincerity and irony.

True originality is baffling. Perhaps it’s just hard for the rest of the herd to know what to make of the sui generis blue kangaroo. What would the typical, straight-forward sincerest of the meditative-narrative mode of the 1980’s do with Knott’s constant tone switching, sonically-fuelled image mash-ups, and his puns, doubletalk and neologisms? Knott’s jokiness and quick-time use of fragments might initially be appealing to a postmodernist of the 90’s and early 2000’s, but what would he or she make of Knott’s use of classical forms like the sonnet, his deployment of a purposed structural dynamics that was anything but dissociative, not to mention his mastery of meter and rhyme? Genius is bewildering. And its capaciousness is annoying. It puts you in your place, even as it gives you an exalted sense of the possibilities for the art. It says, stay there if you want, but don’t expect me to join you. Needless to say, this created difficulties for Bill in terms of both publication and critical reception, most certainly compounded by his own head-spinning, infuriating obstinance.

Knott’s poetry continues to challenge, especially in regard to the relationship between poetry and the political. That Knott sometimes saw himself as a poet with political concerns is clear—some fifteen years ago he went so far as to self-publish his Collected Political Poems 1965-2001. One can only smile to imagine what he would be doing with der Trumpf. In fact, Knott seems to have anticipated the coming of Trump in a poem called “History.” The poem consists of two words: “Hope … goosestep.”

One thing we can be certain of: were he alive, Bill’s poems would differ greatly from most of those now being written about our political situation. The current period style, as it has evolved over the last 5-10 years, is often keenly focused—for good and obvious reasons—on issues of social justice and political witness. In much of this work, an emphasis has been put on narrative linearity, tonal earnestness, and a prose sensibility whose virtues are associated with the so-called docupoetics movement. What Knott’s work offers is a stylistic alternative, one that is expressive, lyric, full of language play, and as capable of embracing political contradiction as that poetry written by Vallejo or Gottfried Benn, in their very different ways.

When you go back and look at The Naomi Poems, that towering first book among first books, you see a great, funny, sorrowful, maddened love poet, for sure, but you also see the man outraged by what his country was doing in Southeast Asia at the time. “Outrage” seems an inadequate word here; in their lyric precision and inventions, Knott’s poems against the war crimes being perpetuated in our name in Viet Nam sound as if he were prosecuting a case in front of some international tribunal whose judges were all possessed by the duende. They offer a terrific model for how we might meet the social and spiritual violence of our own time.

One of these poems from Corpse & Beans has a title can’t actually be pronounced, since it’s comprised of the word “Voices” split by parentheses that enclose the word “Poem”—there’s an indictment buried in that construction, an indictment of the ease with which poets often assume a pose in taking on political events, a stance that assumes the language of their poems is innocent, when in fact it’s complicit. The poem ends with a self-reflexive move that strips both reader and writer of illusions. Knott gets to that conclusion with a dizzying array of implied narrative scenes, myth-invoking visions, figurative statements, deconstructed and inverted aphorisms, and a joke about the American auto industry—all of it held together by a simple refrain. There are echoes in it variously of Archilochos, Hardy, Rimbaud, the New Testament, and god knows who or what else. It’s less like the other so-called “protest poetry” of its time than it is like the late-period paintings that Philip Guston had begun to make in the mid-60’s. Like Guston, Knott made genuinely enigmatic, powerful pieces out of his disgust with art, disgust with its easy assumptions and clubby marketplace. You might say that Knott was a maker of the sort who Guston once referred to as being “illegal for all time.”

Bloodspurts lessening … hoofbeats of animals
stalked to their birth by the sun, fade. It is a bright
edgeless morning, like a knife that to be cleaned
is held under a vein.

I blink away the stinging gleam
as my country sows desert upon Vietnam.
We, imperious, die of human thirst
— having forgotten tears are an oasis.

“help … help”   From heart to heart
a heartbeat staggers, looking for a haven.
Bereft. It is easier to enter heaven
than to pass through each others’ eyes,

pores,
armor,
like merciful sperm, cool water, the knife —
thrust of tears… It is easier
to go smoothly insane — like a Detroit car —
than to stammer and hiccup help.

And this poem is the easiest thing of all:
it floats upon children’s singing, out of the bloodstream;
a sunbeam shoulders it, carries it away.
There is nothing left.
“please … please”

DAVID RIVARD’s most recent book, Standoff, is the winner of the 2017 PEN New England Award in Poetry and was listed by The New Yorker in its “Books We Loved in 2016” roundup. His five other books include Otherwise Elsewhere, Sugartown, and Wise Poison, winner of the James Laughlin Prize from the Academy of American Poets and a finalist for the Los Angeles Times Book Award. A recipient of awards from the Guggenheim Foundation, Civitella Ranieri, and the NEA, he teaches in the MFA in Writing program at the University of New Hampshire.