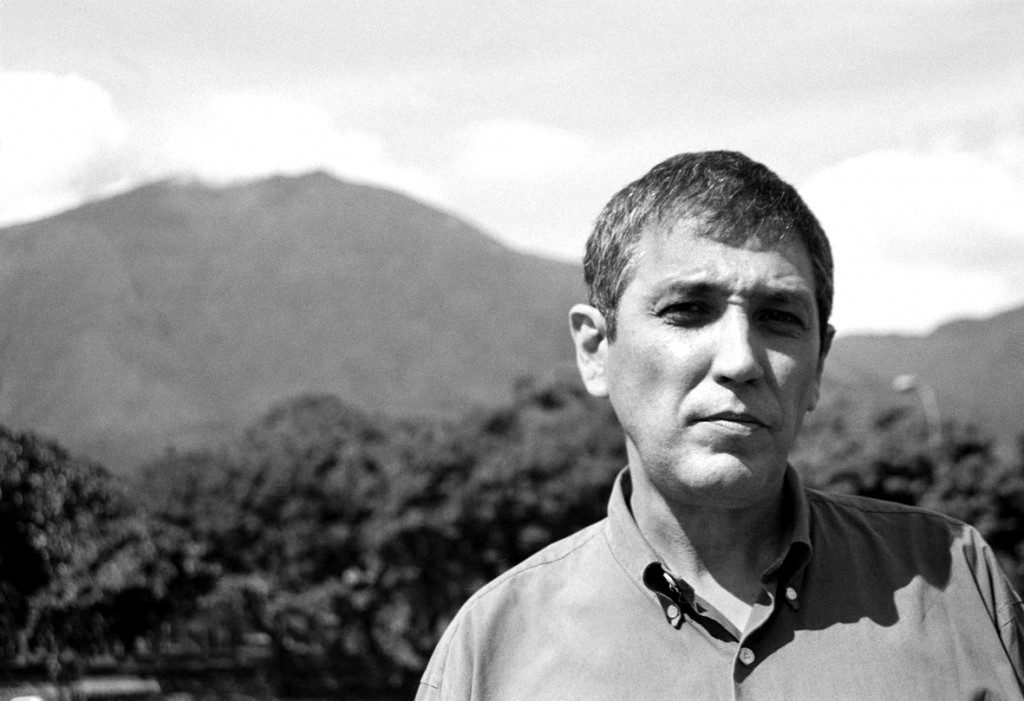 In Buenos Aires they called it mist. In Mexico City, smog. When the wind from the Sahara blew and covered Santa Cruz de Tenerife, the islanders knew it as haze. In Caracas there was soot, and I was moving through smoke and ashes on the day I went out to kill the president.

A persistent fire was ravaging Mount Ávila. The flames had never reached such heights. The forest ranger stations were overtaken and the neighboring zones began to burn. In the out- skirts, toward Sartanejas, in Fort Tiuna, where they trained the battalions of recruits, the pines were burning. The pines were burning in Caracas. These weren’t the Christmas pines you find in bazaars nor pinewoods from an exotic garden. Those who liked to quibble might have questioned whether pines actually existed in Caracas. They did. And they burned like they might anywhere else. And the resin—an oil that burns itself up—filled the air.

I had been fleeing from my comrades for two days now. Silvestre was escaping with me. They set a trap for us during a meeting. Lourdes had always lent herself to helping set up traps; she was a government agent, I kept telling them and they’d laugh, accusing me of being paranoid or horny or jealous. “The comrade has a nice ass, and that makes you talk shit,” they said. But there’s no doubt Lourdes was a government agent. I insisted and they kept laughing and insinuating things; there was no need to speculate too much anymore to reach the conclusion that the entire party had been infiltrated. Dominguín says we’ll become the government and that we’re winning at this moment in the process.

They called us so we’d put down our weapons. They invited us to a definitive meeting. Silvestre and I decided to wait.

The days passed. We continued to focus on the tasks inherent to conspiracies. We knew that the people from the organization were looking for us, urgently calling for us to meet with them. We hoped we would do what had to be done. But we remained weary; decisions don’t change from one day to the next. Silvestre and I hid in one of those safe houses that you never reveal, even to your lover. We shared a few places just in case, never all of them. They insisted on seeing us, they wanted to meet in Pinto Salinas; that smelled rotten from the start. We tended to meet in Pinto Salinas at the house of a friend of Lourdes, during the clandestine years. It had been a while since we had gone to the house of Lourdes’s friend and in formal terms, we were no longer clandestine. Silvestre took two additional charges, for his Raging Bull .44. I wore a .38 and tossed six extra bullets in my coat pocket. Before leaving I took a grenade from a shoebox. I remembered what Abelardo had once told me, it’s never a bad idea to bring something that makes a lot of noise. I will always ask myself why we went and in order to not reach drastic conclusions that might compromise my comrade, I maintain it was due to discipline.

Lourdes’s friend lived in an apartment on the twelfth floor of one of the superblocks. We didn’t go up through the stairs, as was our habit. At first we thought we’d go up in the di- lapidated elevator. We smelled something bad. They’d never expect us to use the elevators. We changed plans when we got to the door. We wouldn’t go up. We moved between buildings stealthily. We decided to first go to an acquaintance’s house and send a messenger to the people, changing the meeting place. Our friend lived in one of the houses located alongside the basketball courts, and he would let us use it without a fuss since back when we were still not in power.

We crossed the apartment blocks, got lost in their dark corridors. It was eight at night, the courts were empty, generally at that hour the usual gangsters drink their bottles of anise with rum and burn chunks of crack. We crossed the field. If we had gone through the stairs or the elevator to the house of Lourdes’s friend, they would have killed us as soon as we started to climb the first steps. But they had a second plan, this was it, if we didn’t go to the blocks, they also knew about our acquaintance. Since when do these dogs care at all about the gangsters? Why had they scared them off? We finished crossing the block, from entrance to entrance, letter to letter. Now, we were some experienced men, we knew a thing or two about fate; we couldn’t go back because they had surely closed off our rearguard. At some point I said it was a matter of discipline. It was a dark night, the bulbs on the streetlights were burnt out and the mountain at our back was burning, the glow of the flames barely drew shadows in the slum. We had no choice but to jump onto the zinc rooftops of some houses that emerged beneath a slope at the start of a trail. The noise was thunderous. The mountain was burning and the fire was illuminating a couple of men who were sprinting as they plunged into the rooftops of shantytown homes. The shots began to sound at intervals, one, two; we didn’t respond, I sank into the shadows up to my chest, the zinc sheet from one of the roofs gave way, a spray of bullets rained down on us.

“Let yourself fall, motherfucker,” Silvestre shouted at me, I didn’t understand him, my suit was torn but I had been able to pull my revolver from the holster.

“Let yourself fall into the fucking house.”

Silvestre returned fire, six shots in a single blow. I got out of the trap as soon as I could and crawled, shot back two times, reached an edge of the roof and let myself fall into one of the alleys, I could barely glimpse a tall man with his head shaved who was aiming at me, he brought his whole body against me, why wasn’t he shooting at me, his head exploded. Silvestre had plugged him at the base of the nape with a bullet from his .44. As soon as I stood up I had to get rid of another guy who was lunging toward me, this time I got him right between the eyes. We ran downhill, until reaching the avenue. Silvestre jumped head first onto the windshield of a Fiat Uno that was descending, while I grabbed the girl at the wheel by her hair, I barely glimpsed her eyes, brown, black, shining, her white teeth, perfect, her chest agitated and her breath metallic, I threw her to the pavement, I realized I felt a warmth between my legs, as though I’d pissed myself, I checked with my hand, looking for blood, it was likely they’d wounded me, but it was an erection, a damned and simple erection. Silvestre opened the passenger side door however he could and we took off, I was laughing, I was fucked up but I was laughing. Silvestre found a box of cigarettes in the glove compartment of the Fiat, he lit one for me and put another one between his lips.

“We barely escaped,” I let loose with a puff of smoke. “And now who’s looking for us? The organization or the government.” Silvestre took a deep drag and kept the smoke in his lungs, he released it with the same strength as when he inhaled it.

“It’s the same shit. Aren’t you injured?” I smiled with the cigarette in my teeth. “No, I’m fine. Even got a hard-on.” He shrugged, didn’t understand anything. I asked him the question in the voice of the mouse in the comic books: “And what’ll we do now, Silvestre?” He didn’t think, he had nothing to think about, he had already thought about it since birth, he was an illuminated one, destiny was in front of his eyes. “We’ll kill the president.”

ISRAEL CENTENO was born in Venezuela in 1958. He has published 14 books, primarily novels but short story and poetry collections as well. He is regarded as on of the most important Venezuelan literary figures of the last fifty years. He has won the Federico García Lorca Award in Spain and the National Council of Culture Award in Venezuela. Since 2011 he has lives in Pittsburgh with his wife and two daughters, as an exiled writer-in-residence at City of Asylum Pittsburgh.

The Conspiracy by Israel Centeno translated from the Spanish by Guillermo Parra is being published by Phoneme Media in March 2017.

GUILLERMO PARRA is a poet and translator. His translations include José Antonio Ramos Sucre: Selected Works and Sucre’s From the Livid Country. His own books of poems include Phantasmal Repeats and Caracas Notebook.